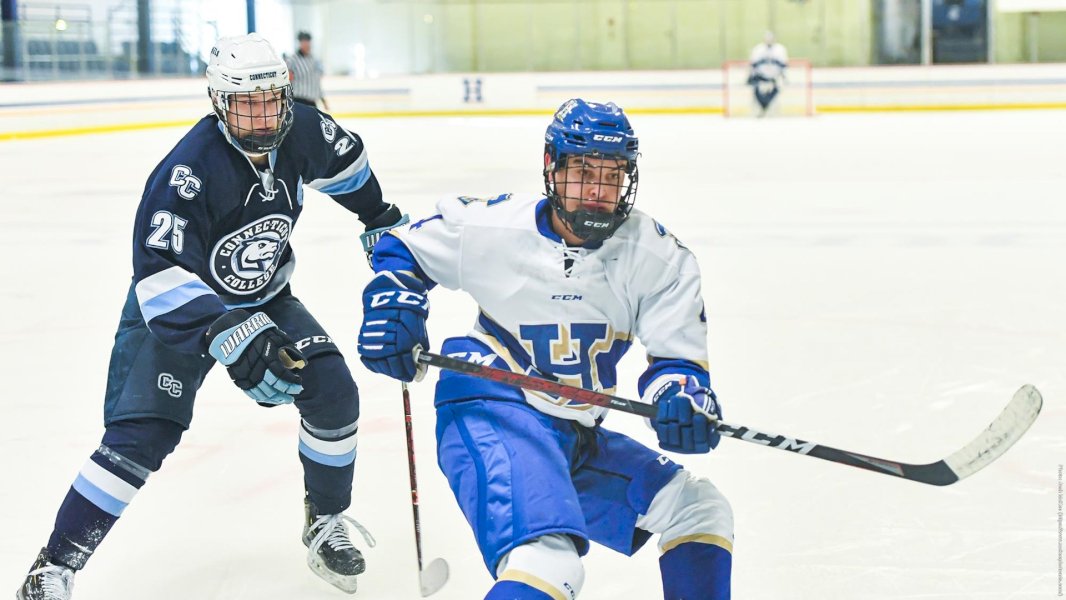 Middlebury College’s Chris Garbe scored two goals, including the game-winner with 2:38 left in the sudden-victory overtime period, and the Panthers posted a 3-2 NESCAC triumph against the Hamilton College Continentals at Middlebury’s Chip Kenyon Arena on Tuesday afternoon.

Hamilton (5-6-0, 4-5 NESCAC) killed all four of its penalties and scored a short-handed goal. Nick Rutigliano ’22 had four of the Continentals’ 14 blocked shots, and Fred Allaire ’23 won 8 of 13 faceoffs.

Nolan Moore gave the Panthers a 1-0 lead on an assist from Jin Lee as the teams skated 4-on-4 at 10:27 in the first period. Middlebury went 0-for-2 on power-play opportunities in the first 20 minutes.

William Neault ’25 tied the score with his first goal for the Continentals at 5:42 in the second period. The scoring sequence began in the neutral zone, with Grisha Gotovets ’25 receiving the puck off a stretch pass. Gotovets carried it up the middle of the ice and snapped a shot from the right faceoff dot. Panthers goaltender Jake Horoho (24 saves) made the initial save, but the rebound bounced out and Scott McKenzie ’25 controlled it in the crease. Rather than going for the shot, McKenzie passed out to a rushing Neault, who dropped to his knees to fire a shot to the far side of the net. Gotovets is tied for second on the team with four assists and eight points.

Jordi Jefferson ’22 gave the Continentals the lead with an unassisted short-handed goal at 10:57 of the second. Jefferson poked the puck off the wall in the neutral zone and got behind the defenders for a breakaway. He glided to the front of the net, carried the puck across, shifted to his backhand and tucked the puck behind Horoho. Jefferson is tied for second on the team with four goals.

Hamilton held the lead for the next 23-plus minutes before Garbe evened the score with 5:40 left in the third period. Antoine Belisle, who won 11 of 17 faceoffs, picked up the assist.

Sean Storr ’22 made 24 saves for the Continentals. Hamilton returns home for another conference contest against Wesleyan University on Friday, Jan. 28 at 7 p.m.