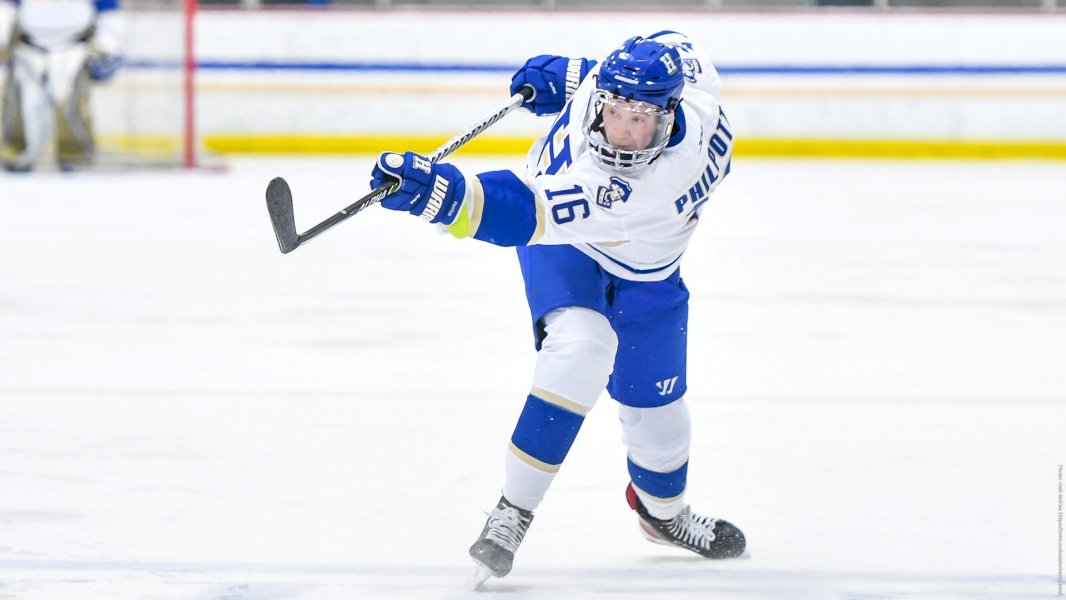 Wesleyan University’s DJ Dixon scored 1:39 into the sudden-victory overtime period and lifted the Cardinals to a 4-3 NESCAC win against the Hamilton College Continentals at Hamilton’s Russell Sage Rink on Saturday afternoon.

Season Update
The Continentals dropped to 3-3-0 overall and 1-2 in the conference. Wesleyan, which received votes in the most recent USCHO.com Division III Top 15 poll, is 5-1-0 overall and 3-1 in the NESCAC.

The Cardinals’ Marc Smith made a save 21 seconds into the extra period and the next shot on goal was Dixon’s game-winner. Max Bulawka ’26 drew Hamilton even with 4:40 left in the third period. Grisha Gotovets ’25 and James Philpott ’25 picked up the assists. Wiggle Kerbrat gave Wesleyan a 1-0 lead with a power-play goal at 5:26 in the first period. Dixon made it a two-goal advantage on an unassisted, short-handed tally with 7:51 remaining in the second period. Philpott started the Continentals’ rally with 9.9 seconds to go in the second when he scored 16 seconds after a Hamilton power play ended. Gotovets and Fred Allaire ’23 had the assists. Philpott tied the score 2:27 into the third period. Alex Danis ’26 and Bulawka collected the helpers. The deadlock was short-lived as Ethan Davidson put the Cardinals back in front just 32 seconds later.
Notes

Philpott finished with two goals and an assist. The three-point game is his first and he leads the team with four goals and six points. Bulawka’s goal and assist gives him three points this season. Gotovets was credited with two helpers and has 16 for his career with the Continentals. Allaire posted his 17th career assist and won eight faceoffs. Danis registered his first point at Hamilton. Sean McAvoy ’23 won 8 of 14 faceoffs. Jack Grant ’24 made 19 saves for the Continentals. Smith finished with 35 stops for Wesleyan. Hamilton took six shots on its two power plays.
Next Game
The Continentals host Middlebury College (1-5-0, 1-3 NESCAC) on Friday, Dec. 9 at 7 p.m. for another conference contest.