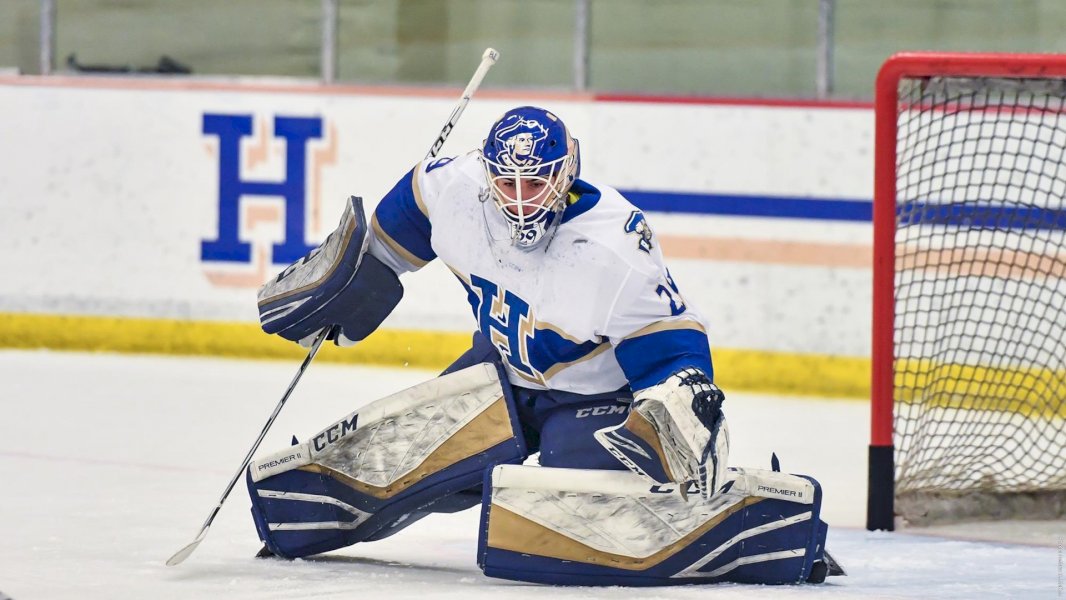 The Continentals (2-1-0 overall) out-shot the winless Bears 35-27, and Sean Storr ’22 recorded a season-high 27 saves for his third shutout at Hamilton. The Continentals are on the road for their next six contests starting with a NESCAC matchup at Wesleyan University on Friday, Dec. 3 at 7 p.m.

Hamilton was able to take advantage of a delayed penalty on Potsdam and recorded its first goal at 6:53 in the first period. Ryan Brown ’25 won the puck in the corner and poked it out to Sean McAvoy ’23 who fed it to Carter Dwyer ’23. Dwyer was wide open on the left side of the net to put it in for his first goal with the Continentals.

Hamilton’s second goal came with one second left on their power play at 8:52 in the first. Cade Groton ’23 and Matt Gellerman ’24 were battling three Bears in the corner for the puck. Groton gained control and passed it to Gellerman who found James Philpott ’25 at the point. Philpott skated past a Potsdam defender and put it in the top-left corner for his first collegiate goal.

The Continentals capitalized on another Potsdam penalty and scored another power-play goal at 6:02 in the third period. Dwyer took a shot that sailed wide and was picked up by Philpott, who passed to Chad Varney ’22. Varney and Philpott passed to each other above the left faceoff circle before Varney found an opening and buried a shot for the 3-0 lead. Varney has two goals this season and four for his Hamilton career.

Potsdam (0-7-0) had a few opportunities to add a goal to the board, but the Continentals’ special teams were able to shut them down. In the third period Hamilton took a five-minute penalty but the Bears could not find the back of the net and instead took two penalties themselves.

Clemons Scores for the Orange