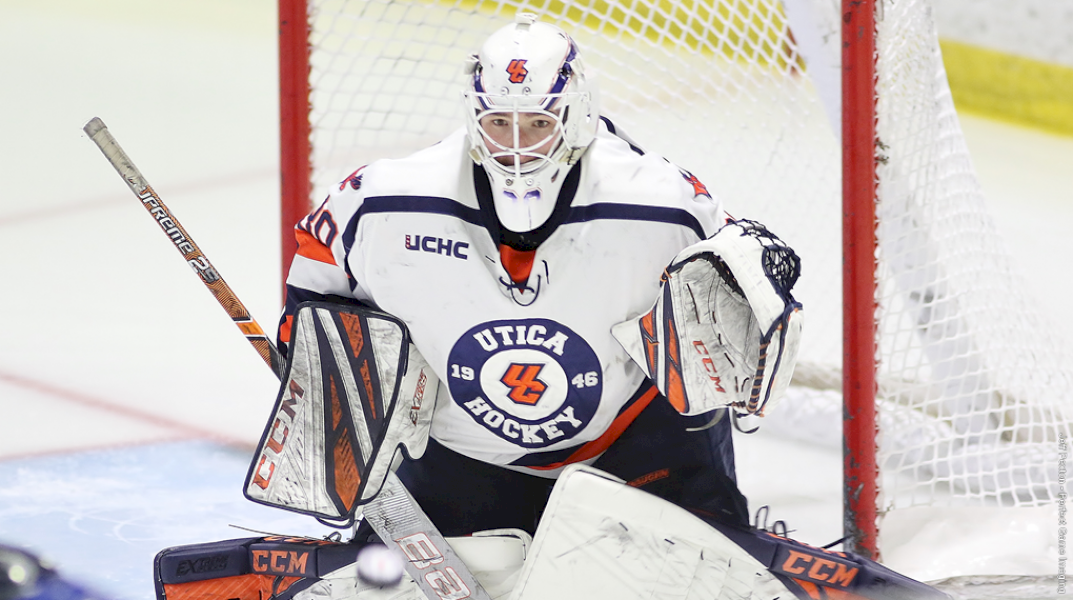 Follow Along: Live Stats will be posted at https://oswegolakers.com/sidearmstats/mhockey/summary. Live video will be available courtesy of Oswego Student Media at https://wtop10.com/live/, and Oswego student radio station WNYO 88.9 FM will also carry the game online at https://wnyo889.org/.

If You Go: Tickets are 8 dollars each and are available at tickets.oswego.edu. Per SUNY Oswego’s latest guidance, all spectators ages 5 and up at indoor events must show proof of having completed a full COVID-19 vaccination series OR proof of a negative COVID-19 test. Fans will need to bring acceptable proof along with a valid government issued identification with a photo that matches the proof. Masks will be required at all times inside their facility.

AmeriCU Jersey Auction: UC Men’s Hockey will once again join forces with AmeriCU Credit Union to support the Carol M. Baldwin Breast Cancer Research Fund of CNY through their AmeriCU Jersey Night initiative. The Pioneers are currently auctioning off their collector’s edition AmeriCU/Carol M. Baldwin game jerseys from now until Oct. 23 when they wear the jerseys in an exhibition against SUNY Cortland. More information is available at https://ucpioneers.com/sports/2021/10/12/AmeriCU.aspx.

They’ll Be Missed: Utica will be without the services of two players who moved on with their degrees this Spring. Forward Conor Landrigan (New Tripoli, PA/Binghamton Jr. Sens (NAHL)) departs as the only two-time Conference Player of the Year in program history, and was one of the program’s most consistent performers ever with 114 career points in 86 games before turning pro with the ECHL’s Tulsa Oilers. He was a 2020 AHCA All-American, and was in the top five nationally in points per game in consecutive seasons, including his 2020-21 mark of 2.40 points per game that led the nation. Defenseman Brandon Young (Muskegon, MI/Johnstown (NAHL)) finished his career with 18 total points in 47 career games, and was also an integral part of the UC Men’s Golf team during his time with Utica.

The Graduates: With the NCAA’s eligibility guidelines concerning COVID-19, Utica is pleased to welcome back three graduate students for an additional year with the team. Forwards Jamie Bucell (Garfield Heights, OH/Philadelphia (EHL)) and Brett Everson (Mississauga, Ontario/Hawkesbury (CCHL)), and defenseman Vaden McManus (Fayetteville, NC/Hampton Roads (USPHL)) form  Bucell returns for his fifth season, and is fresh off his strongest season yet. The native of Ohio ripped United Collegiate Hockey Conference opposition to shreds during the abbreviated campaign, as he rattled off career highs in goals (8), assists(7), and points (15).  He impressively accomplished those high water marks in just ten games, and is Utica’s leading returning scorer from the 2020-21 season.  He was fourteenth in the nation at an average of 1.50 points per game on his way to a second team All-Conference selection. Everson also had himself a sharp season with thirteen points on eight goals and five assists in just nine games played. He was thirteenth in the nation in goals per game, and tied for seventh in the nation with four power play goals. McManus has 31 points in 60 career games, and had an outstanding nineteen points from the blue line during the 2019-20 season. That group has won 74 games in four years, won two UCHC postseason tournament titles, and four straight regular season championships during their tenure. With the spare year available to them, they will have the opportunity to set a new standard for wins by a single class in program history.

Juniors Ready to Roll: While the Pioneers are lucky to have an abundance of graduate-level experience, the team’s junior class features a quartet of explosive forwards. Brandon Osmundson (Virginia Beach, VA/Hampton Roads Whalers (USPHL)) and Dante Zapata (Huntington Beach, CA/Austin Bruins (NAHL)) both built off their remarkable rookie seasons with sizzling sophomore efforts, as each of them posted fourteen points on five goals and nine assists while appearing in all ten games. Osmundson now has 56 points in his first 39 games played. Buster Larsson (Malmo, Sweden/Syracuse Stars (NCDC)) and John Moncovich (Wilmington, NC/Hampton Roads Whalers (USPHL)) weren’t far behind their classmates last season, as Larsson had six goals and seven assists for 13 points, and Moncovich had twelve points on five goals and seven assists. Larsson and Moncovich were two of the five players on the team last season with multiple power play goals.

The One They Call Yaz: Nick Yzaguirre (Chicago, IL/Charlotte Rush (USPHL-Premier)) had his best season yet with the Pioneers this spring. On three goals and three assists, he sat just one point back of his career-high, which was set in a full season as a freshman. He led the nation with two short-handed goals in ten games.

The Transfer of Power: The Pioneers will be bolstered by a faction of four transfer students this season, including one of Division III’s best skaters and two others with Division I experience. Forward Mic Curran (Arlington, MA/Curry College (CCC)) could be the most interesting prospect of the bunch as he joins the team from Division III Curry College. During a five-game junior season, he led the Colonels with seven points. During the 2019-20 campaign, he was as good as it gets nationally in Division III, with a team-high 46 points on his way to being named to the Commonwealth Coast Conference first team. He was fifth in the nation with 1.77 points per game, and has compiled 70 points in his first 52 career games. Forward Khristian Acosta (Port Monmouth, NJ/Mercyhurst University (NCAA DI)) checks in from Division I Mercyhurst, and had nine points in 33 games over two seasons with the Lakers. He had two seasons with 20 points or more with the USHL’s Tri-City Storm. Defenseman Brian Scoville (Agawam, MA/Alabama-Huntsville (NCAA DI)) joins the Pioneers after playing in all 22 games as a freshman with the now-dormant Division I program at Alabama-Huntsville. Also set to play in his first season with the team is goaltender Louis-Felix St. Jean (Montreal, Quebec/Salve Regina (CCC)), who transferred last Fall from Salve Regina, but sat out the shortened Spring season. He started 16 games for the Seahawks during his time there.

The Battle in Net: Senior Sean Dickson (San Francisco, CA/Hampton Roads Whalers (USPHL-Premier)) enters preseason camp as the man to beat between the pipes after a spectacular spring. In his first season as the full-time starter, Dickson swatted away 96.2 percent of opposing shots, had a GAA of just 0.75, and had a school single-season record four shutouts on his way to a 6-2 record. He was second nationally in goals allowed average, third in save percentage, and tied for the national lead in shutouts. He was named second team All-Conference, and will be looking to maintain his established high ground against the talented newcomers St. Jean and Landsberger as camp progresses. The new duo possesses tremendous height, with St. Jean standing at 6’5, and Landsberger at 6’6.

Averages That Are Anything But: Utica led the nation last year in scoring offense at an average of 5.90 goals per game. The Pioneers had nine players in the top 100 nationally in points per game. The team has been either first or second in the nation in goals per game in three of the last four seasons. Fueling that effort was an impressive power play that clicked at a Division III-best 39.1 percent. On the defensive end, Utica was sixth nationally this spring with an average of 1.80 goals per game allowed. The Pioneers were 18th on the penalty kill.

About Oswego: The Lakers sat out the 2020-21 season. They were 16-10-1 in the previous year en route to a runner-up finish in the SUNYAC tournament. Leading point-getter Travis Broughman returns, and the team will also be counting on a multitude of Division I transfers. Utica will meet Oswego in a regular season game on Sunday, January 9th at 3 p.m. at the Aud.

Up Next: Utica hosts SUNY Cortland in a second pre-season tuneup on Saturday, October 23rd.