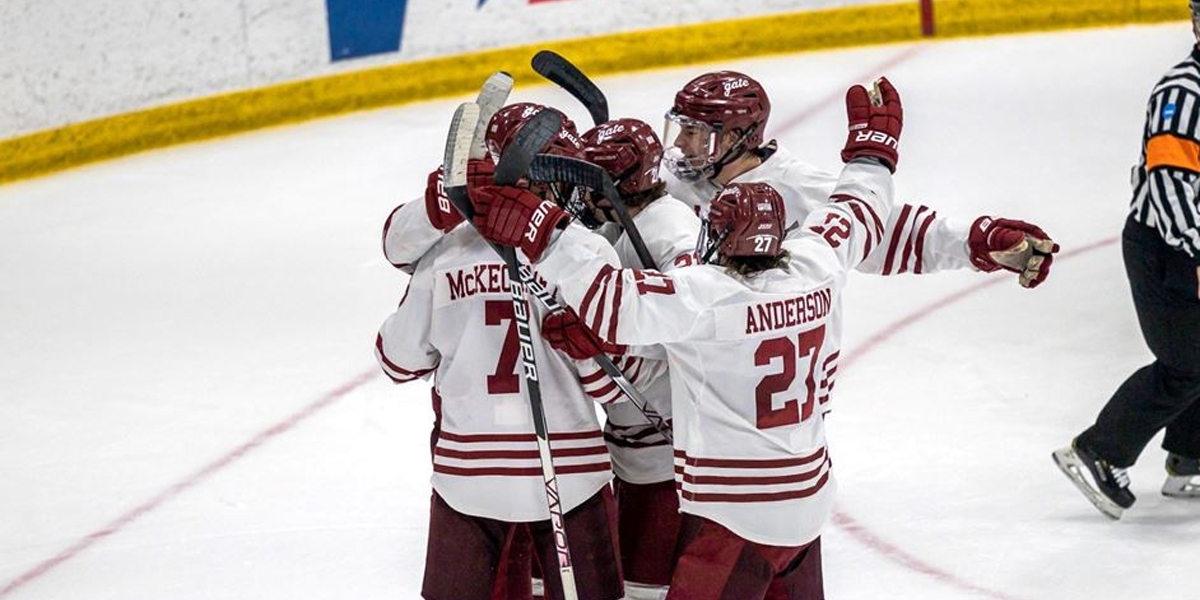 HAMILTON — Colgate Men’s Hockey has announced the addition of eight players, including seven freshmen and one transfer for the 2022-23 season.

“It is always a great time of the year as the guys arrive back on campus. There is a lot of excitement around the program as we look to build on last year’s run,” said Head Men’s Hockey Coach Don Vaughan.

“We are really looking forward to working with this new incoming class. Starting on the back end, we have two first-year goalies with size and athleticism that are proven winners. It gives us great depth in that position.

The first years overall have exceptional hockey IQ and can skate. Their ability to get up and down the ice will really help our transition game. Obviously adding a transfer defenseman with championship experience will allow us to draw on that experience which can only help as we continue to work towards winning a championship.”

The eight newcomers are listed below in numerical order.

#1 Andrew Takacs
Goalie
Bowie, Md.
New Jersey Titans
A 6-2 190-pound goalie, Takacs is a 2019 graduate of Gilmour Academy. Before Gilmour, he attended Dematha Catholic Prep in his home state of Maryland and earned Goalie of the Year honors. Tackas also excelled in the classroom during high school, earning all-academic accolades. He went on to play three seasons of junior hockey in the NAHL, including his final one with the New Jersey Titans. He helped the Titans claim the 2022 NAHL Robertson Cup that season. Takacs posted a .908 save percentage and a 2.82 goals-against average in 104 games during his junior hockey career.

#4 Reid Irwin
Defenseman
Victoria, British Columbia
University of Denver
Irwin, a 6-1 192-pound defenseman, joins Colgate as a transfer from the University of Denver. Last season, Irwin played in 21 games and logged a +10 rating as a member of the Pioneers’ National Championship team. His career stats during his two seasons at Denver included four goals, one assist, one game-winning goal, and a +12 rating. He earned the Pioneers’ Most Improved Player Award during the 2020-21 season. Academically, Irwin is a two-time AHCCA All-American Scholar and NCHC Academic All-Conference Team selection. Prior to Denver, Irwin tallied 84 points by 17 goals and 67 assists in 175 career AJHL games for the Lloydminster Bobcats and Sherwood Park Crusaders from 2017-2020. Irwin is a 2017 graduate of Shawnigan Lake School.

#6 Bobby Metz
Defenseman
Bloomfield Hills, Mich.
Minnesota Wilderness
A 5-9 178-pound defenseman, Metz is a 2020 Salisbury School graduate. During his senior year at Salisbury, he tallied two goals and seven assists and helped his team claim the Elite Eight Championship. Metz went on to play three seasons of junior hockey in the NAHL, including his final two with the Minnesota Wilderness. In 117 career games, he tallied 48 points by 17 goals, and 31 assists. During his final season, Metz was named NAHL Defensive Player of the month for October 2021 and served as an assistant captain for the Wilderness.

#7 Simon Labelle
Forward
Greely, Ontario
Prince George Spruce Kings
A 2020 graduate of Louis-Riel, Labelle is a 5-10 175-pound forward. He played junior hockey with the Rockland Nationals of the CCHL and the Prince George Spruce Kings of the BCHL. In 160 career games, he tallied 146 points by 53 goals, and 93 assists. Labelle helped Prince George reach the conference semifinals after leading the team in assists during the 2021-22 season. Labelle was also selected to play in the BCHL Top Prospect Game during his final season.

#22 Sebastian Tamburro
Forward
Toronto, Ontario
Bonnyville Pontiacs
A 5-10 180-pound forward, Tamburro graduated from St. Michael’s College School in 2019. While in high school, he excelled on and off the ice earning Ontario Scholar honors. Tamburro split his junior hockey career between the Aurora Tigers (OJHL) and the Bonnyville Pontiacs (AJHL). During his one season with the Tigers, he tallied 32 points by 18 goals, and 14 assists. Tamburro played in 76 games in two seasons with the Pontiacs, notching 75 points with 27 goals and 48 assists. He earned the team’s Top Scorer and Plus Minus award during the 2021-22 season.

#23 Owen Neuharth
Forward
Savage, Minn.
Fairbanks Ice Dogs
A 5-11 177-pound forward, Neuharth is a 2020 graduate of Academy of Holy Angels. During his high school career, he tallied 141 points by 52 goals, and 89 assists. This included 52 points (18G, 34A) during his senior season. He went on to play two seasons of junior hockey with the Fairbanks Ice Dogs of the NAHL. During his time with the Ice Dogs, Neuharth played in 70 games notching 54 points with 14 goals and 40 assists. In his final season, he finished sixth on the team in assists with 21.