Meet the player who leads the women’s hockey team 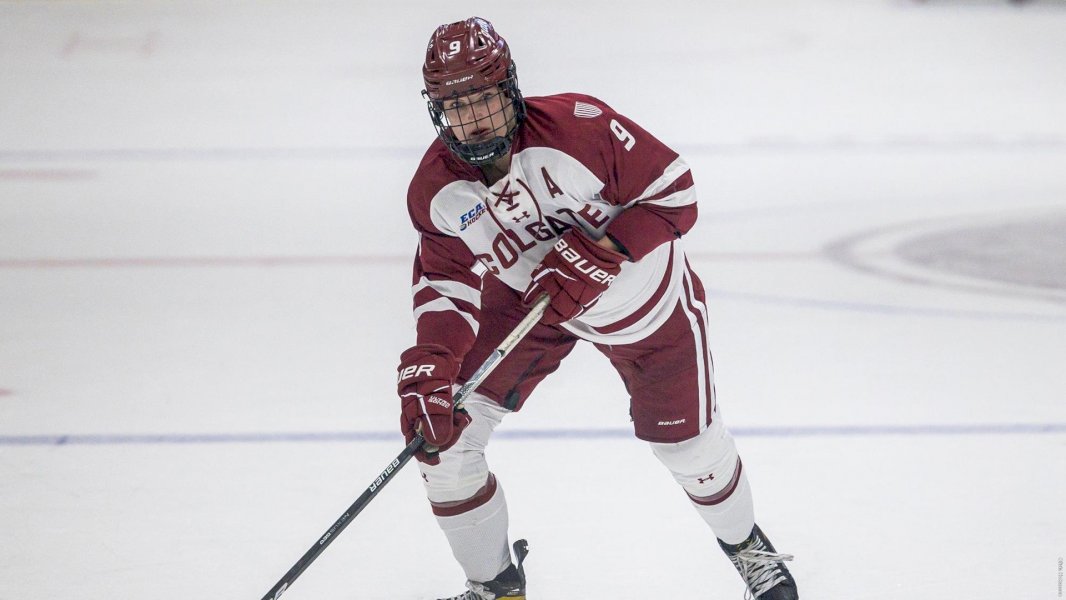 It was the winter of 2018 when Greg Fargo traveled to Kelowna, British Columbia to see a prospective player.

Traveling afar is part of the job to land top talent. But this trip was different.

Rather than attend a game, Fargo, head coach of the Colgate women’s hockey team, crossed the continent for a practice.

After watching Danielle Serdachny ’23 at games, tournaments, and showcases, Fargo wanted to show the Edmonton, Alberta native that Colgate was eager to see her in maroon and white.

“You don’t fly across the country to see someone practice, but we wanted her to know how much we cared and wanted to have her at Colgate,” Fargo said. “It was well worth the trip.”

The visit capped off an effort that spanned two years and involved conversations over the phone and meetings at showcases. Colgate’s reputation for academic excellence, plus a tour of the campus were also major factors in the highly-touted recruit becoming a Raider.

“I could tell they cared a lot about the team as well as individual development, which was important for me,” Serdachny said of Fargo and his coaching staff.

She’s the team’s leading scorer with 11 goals and 23 assists in 22 games, and anchors one of the top lines in the nation. She runs the power play, kills penalties, and is always on the ice against the opponent’s top line.

Last year, she became the first Colgate women’s hockey player to be named ECAC Hockey Player of the Year. She was also named a First Team All-American, a feat that no other Raider had achieved in the Division I era.

“It’s definitely a great honor to receive those recognitions,” she said. “But a lot of that goes to my teammates and coaching staff for believing in me.”

Serdachny, an economics major, praises the depth of her team, and said the players are determined to continue improving.

This is the seventh-straight season the Raiders have had a winning record. Last season, Colgate won its first ECAC Conference Championship and advanced to the NCAA Tournament as the No. 4 seed.

While the second half of the schedule must still be played, the Raiders are having another big year, led by their top line.

One of the challenges that hockey coaches face is forming the right line combinations. Even the most talented players may fail to mesh with one another, no matter the level of hockey.

This season, Serdachny was lined up with Dara Greig ’24 and Kalty Kaltounkova ’24. The line has become a dominant force.

In a recent 4-2 win against Dartmouth,Greig scored a hat trick with Kaltounkova and Serdachny each picking up three assists.

Greig’s 14 goals and 14 assists on the season is good for third on the team, behind Kaltounkova, who is second in scoring with 14 goals and 18 assists.

Kaltounkova, an educational studies major from Vlasim, Czech Republic, credited her line’s success to strong chemistry and the friendship the three players have formed off the ice. She praised Serdachny for being a leader and great teammate.

“She cares so much about her teammates and works so hard during practices and games,” Kaltounkova said. “You can always expect Danielle to give her best and that’s what makes her a very special player and teammate.”

Greig, who grew up in Lethbridge, Alberta, played hockey with Serdachny in high school..

“I’ve been pretty lucky to grow as a player with Danielle and watch how far she’s come since then,” Greig said. “She is a powerhouse center who is defensively responsible while leading our offense as well. I’ve always looked up to her in many ways and try to model my game after hers.”

Greig and Kaltounkova are playing together for the first time this season and have become a perfect match with Serdachny as their center.

“Kalty is one of those naturally born offensive players,” Greig said. “We seem to always know where each other are on the ice and I’ve seen Kalty make plays I didn’t even know were there. It has been nothing but fun getting to play with Danielle and Kalty this season.”

Serdachny credits her Colgate teammates and coaches for her success. But her upbringing also played a key role.

She started playing hockey around age 2. Her father, Steve Serdachny, is a former power skating and skills coach for the Edmonton Oilers, and continues to offer those hockey lessons to people in the region. Her two sisters and one brother are hockey players. Their mother, Debra, spent countless hours driving the kids to rinks each day.

Behind the family’s home is an outdoor rink, which her father constructed.

As a child, a typical day for Serdachny consisted of practice with her hockey team, followed by training with her father.

“He’s a great mentor to have and someone you can rely on for advice,” she said.

At Colgate, Serdachny has demonstrated a level of competitiveness that has surprised even her coaches.

“You always know when you have a good player entering the program,” Fargo said. “But who they are and what they do every day is what separates them from the next good player. If you want to be great, you have to be great every day. That’s something we didn’t know — how driven she was.”

During Serdachny’s first year at Colgate, she was quiet, rarely saying anything out of respect for others in the locker room. Now she’s become more vocal while leading her team, Fargo said.

“She’s grown a lot,” he said. “She’s surrounded by other people who I feel can help her be herself. She found exceptional line mates. They are just getting started. The best is yet to come.”

Loh ’23 is NESCAC Women’s Hockey Player of the Week