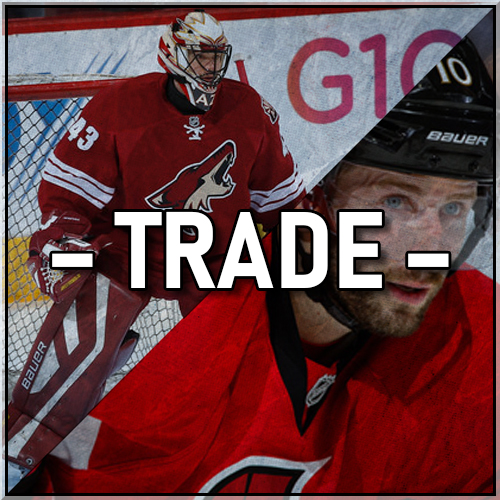 Veterans Mike McKenna and Tom Pyatt will likely be in the lineup for Utica this weekend after Vancouver acquired both from the Ottawa Senators in exchange for Anders Nilsson and Darren Archibald. McKenna, who backed up Jacob Markstrom last night in Ottawa, was placed on waivers this afternoon and is expected to backup Markstrom once again tonight in Montreal before reporting to Utica if he clears waivers.

With Nilsson being moved, Thatcher Demko most likely played his last game with the Comets Wednesday in a 4-2 win over Syracuse. Vancouver GM Jim Benning said via conference call to media “It’s time to bring him up and see where he’s at facing NHL competition.” McKenna being placed on waivers almost guarantees Demko will be heading to Vancouver.

McKenna is in his 14th professional season and beings a ton of experience with him to Utica. He is the winningest U.S.-born goaltender in AHL history with 226 career victories. He has ammassed a 2.70 GAA and .913 save percentage while going 226-175-39 with 16 different AHL teams. McKenna helped lead Syracuse (2017) and Texas (2018) to the Calder Cup Finals, but both teams fell short of winning the trophy.
McKenna will be an Unrestricted Free Agent at the end of this season. He is currently on a one-year, two-way, deal that he signed with Ottawa in July. He will be making $175,000 while in Utica.

Tom Pyatt is a 31-year old forward who has played in 445 NHL games with Ottawa, Tampa Bay and Montreal recording 43 goals and 58 assists. Pyatt has appeared in 156 AHL games where he has 32 goals and 51 assists. Pyatt will also be a UFA at the conclusion of the season. He is in the second year of a two-year deal worth $1.1M per year.

Archibald was a fan favorite in Utica and will undoubtedly be missed. Throughout his 379 games played in the AHL the undrafted forward has put up 88 goals and 79 assists. Archi also earned multiple call-ups to the big club appearing in 52 games with the Canucks where he scored 6 goals and 8 assists.

Of course, Archibald will forever be remembered during his time with the Comets for this hit on Karl Stollery in November 2013:

We will all miss Archi, but he should see decent playing time on a struggling, basement dwelling, Ottawa Senators team. The Sens next game is Saturday at 1:00pm against the Minnesota Wild.