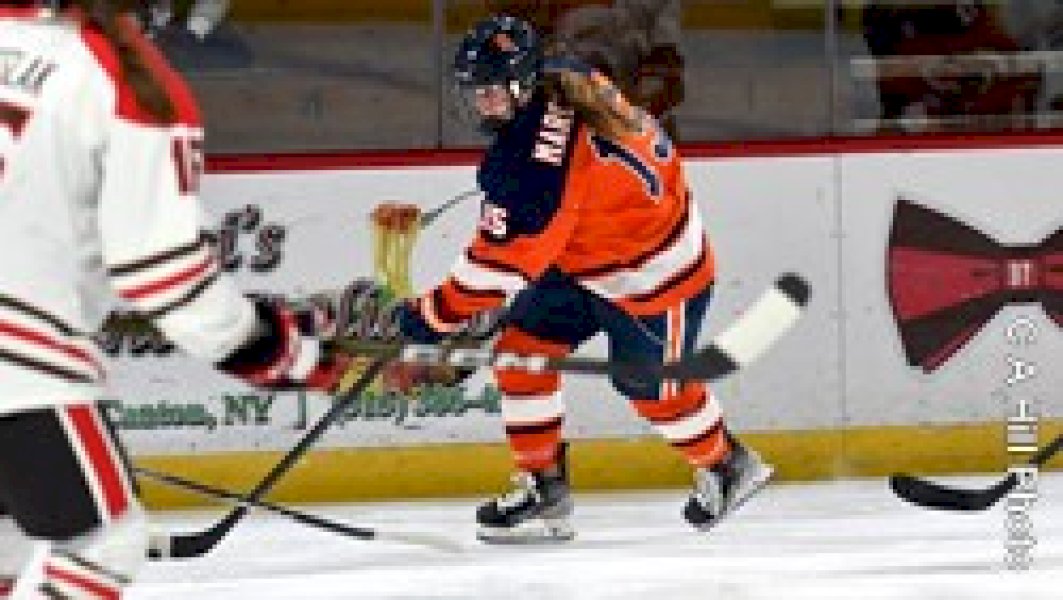 Sophomore Sarah Marchand led the Orange offense with a goal and an assist in a game of scoring runs that St. Lawrence won, 5-3, Saturday in Canton, N.Y. After the Saints took a 2-0 lead in the first four minutes, Syracuse (1-4 overall) scored three consecutive goals to take a 3-2 advantage early in the second period. St. Lawrence (3-3) then scored the final three goals of the game for the win. All three Orange goals were on special teams, including two power play scores and one shorthanded tally.

“Special teams are an area we have been working on,” Smith said. “Today special teams gave us an opportunity to win the game. In two games we have found ourselves down early and come back. It shows a lot of fight early. Now we have to focus right at puck drop. There are a lot of positives to take from today’s game. We generated more offense, and it was very much a game in the third period. Now we have another quick turnaround against a top 10 team. We have to continue to focus on what made us successful and on our special teams.”

Orange goaltender Arielle DeSmet recorded 33 saves to increase her career total to 1,562, which ranks fifth on the Syracuse career record list. Jenesica Drinkwater is fourth with 1,573 saves from 2010-11 through 2013-14.

In the first period, Syracuse responded to a pair of early goals by St. Lawrence to tie the game, 2-2, in the first period scoring on two power play goals. Senior Anna Leschyshyn scored first for the Orange at the 5:57 mark when graduate student Lauren Bellefontaine centered a pass from the right side to sophomore Sarah Marchand who fed it to Leschyshyn on the crease. Leschyshyn put the puck in the back of the net for her second goal of the season.

Marchand evened the score, 2-2, with a power play goal with just more than three minutes remaining in the opening period. Senior Mae Batherson controlled the puck at the point and fed a pass to junior Tatum White who took a shot from the left side and Marchand redirected the puck into the goal. It is the eighth career multi-point game for Marchand, who also won nine faceoffs.

Juniors Sarah Thompson and Rayla Clemons combined on a shorthanded goal to give Syracuse a 3-2 lead less than two minutes into the second period. Clemons sparked the play gathering a loose puck at the Syracuse blue line, outraced all SLU skaters down the left side and passed to Thompson who was cutting from the right side to the goal. Thompson one-timed the puck past SLU goalie Lucy Morgan.

The Saints tied the game, 3-3, with 6:03 left in the second period on a power play goal by Julia Gosling. In the third period, SLU took a 4-3 lead with 13:38 left in the game when Rachel Bjorgan put a loose puck in front of the Syracuse goal into the back of the net and had the final goal with less than two minutes left to play.

Syracuse will play a two-game series against Clarkson with the first at home in Tennity Ice Pavilion on Thursday, October 13th at 6 pm and the second at Clarkson on Friday, October 14th at 6 pm.