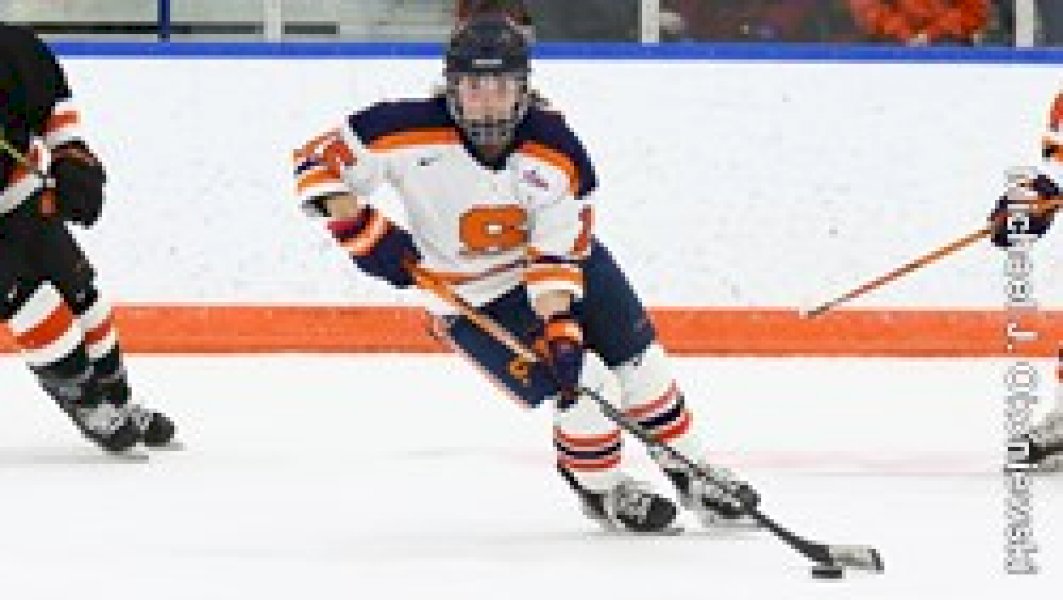 Freshman Sarah Marchand is the College Hockey America Rookie of the Week for the second time this season. The forward from Belle River, Ontario scored one goal and had a career-high two assists in Syracuse’s 4-4 overtime tie against Princeton. She assisted on the first and third goals, which were both power play goals, and scored the second. In the weekend series she recorded six shots, four blocked shots and won 11 faceoffs.

In the first period, Marchand had a hand in both of Syracuse’s goals. On the first she fed a pass from behind the goal to Abby Moloughney on the left side of the crease and Moloughney put a shot past Princeton goalkeeper Rachel McQuigge to give the Orange a 1-0 lead on the power play goal with at the 11:46 mark.

Marchand put the Orange ahead 2-0 when she cut across the crease to the left side and took a pass from sophomore Rayla Clemons and put it in the top right corner of the goal less than six minutes later.

Marchand assisted on Lauren Bellefontaine’s power-play goal that gave the Orange a 3-2 lead with 6:53 remaining in the second period. Moloughney set up the goal by feeding a pass from the left circle behind the net to Marchand who then fed Bellefontaine on the right side of the goal. Bellefontaine put the shot past Princeton goalie Jennifer Olnowich, who replaced McQuigge.

Marchand has five goals and a team-leading nine assists, and her 14 points is second on the team behind Moloughney. She has had at least one point in 10 of 19 games this season.

Syracuse will resume the season on January 1st at the Battle in the ‘Burgh Tournament in Pittsburgh. The Orange are scheduled to play Boston University in the first game on Saturday, Jan. 1st (4 pm) and will play either Penn State or St. Cloud game in the second contest on Sunday, Jan. 2nd.