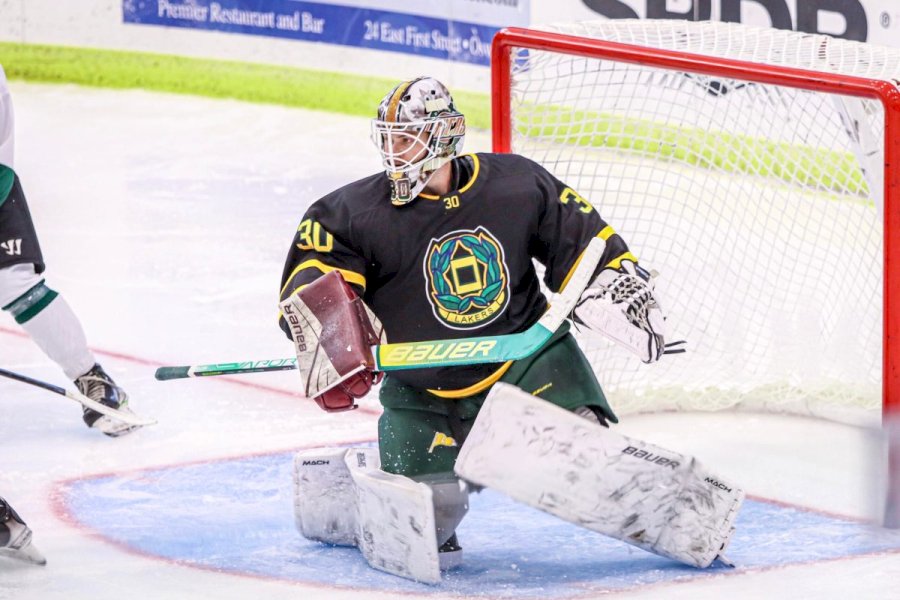 The Lakers won 3-1 against Stevenson University on Oct. 15. The first of two exhibition games this season featured team play and some familiar names getting on the scoresheet.

It also included the first chance for those fresh faces to play in the Deborah F. Stanley Arena in front of the Laker faithful. Freshman defenseman Drake Semrad was one of those newcomers that took the ice for his first game against the Mustangs.

“It was awesome,” Semrad said. “The atmosphere for me was unreal. Growing up I never really played in front of fans or for a school. That has been something I have looked forward to coming here.”

Semrad played for the Richmond Generals in the USPHL Premier last season before making his way to Oswego. The left-handed defenseman played 44 games last year and tallied 15 goals and 18 assists.

The Lakers coaching staff brought in a goaltender to replace the graduated Steven Kozikoski. Cal Schell joins the trio of netminders after spending three seasons with the Flin Flon Bombers of the SJHL.

The 6’ 3” goaltender played one period worth of hockey in the Stevenson University exhibition game. The goaltender made an unofficial nine saves during his time in between the pipes. Schell stepped onto the ice at the start of the third period to take over the goaltending duties.

“It is an awesome rink to play in,” Schell said. “It was a good game and Stevenson [University] is a great team. They played us hard. Coming out with a [win] in that one felt good.”

For most men’s hockey players, the road to NCAA Div. III starts at the junior hockey level. Schell noticed the higher level of competition right away.

“You kind of have to catch up to the pace,” Schell said. “I have noticed that the shot speed and the releases are better. That is something to get used to.”

The other route may be through the transfer portal. Danial Colabufo and Thomas Rocco transferred from NCAA Div. I programs to join the team. Both players dressed in the first exhibition game and got plenty of ice time with their new teammates.

Assistant coach Jon Whitelaw heads into his seventh season on the coaching staff of the men’s hockey team. Coach Whitelaw has witnessed the transition from last year’s team to the formation of this year’s group.

“It has been seamless,” Whitelaw said. “It is funny because I feel like you hear it so much that ‘our group is so close, or we have the closest group’ and a lot of teams will say that. But, when these guys say it, I truly do believe it.”

Coach Whitelaw has seen plenty of groups come through the coach’s hallway of the Marano Campus Center. The returners are an essential part of the transition process.

“The returners did a phenomenal job welcoming the new players,” Whitelaw said. “The new players have brought right into everything we do here. It has made it a seamless transition for [the new players] and it’s made our job easier too as coaches.”

The Lakers set their eyes on another exhibition game this weekend. Coach Whitelaw spoke on the win against Stevenson University but also the learning experiences that come from the contest.

“It was not clean,” Whitelaw said. “It was your pretty typical exhibition game. But from that the amount of teaching points and clips that we have been able to utilize this week sets us up for success going forward into this weekend.”

Carleton Place of the CCHL is the next team to unload their bus into the locker rooms of the Marano Campus Center. The Lakers will host the squad on Oct. 22 with a 7 p.m. puck drop on Family and Friends weekend.

Lakers drop first exhibition game against Devilettes at the Deb