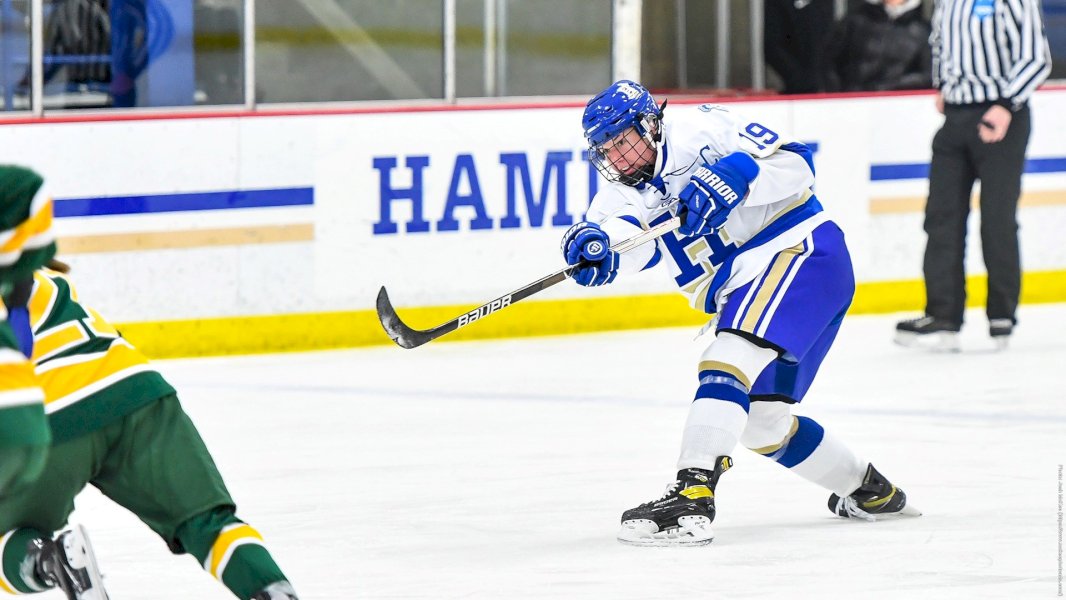 Hamilton College’s Abby Kuhns ’23 scored 52 seconds into the sudden-victory overtime period and lifted the Continentals to a 2-1 NESCAC win against the Trinity College Bantams at Trinity’s Williams Rink on Saturday afternoon.

Season Update
Hamilton improved to 4-2-0 overall and 3-1 in the conference with their second 2-1 overtime victory against the Bantams in as many days. Trinity dropped to 3-4-0 overall and 0-4 in the NESCAC.

A tripping penalty on the Bantams that was called with 57.8 seconds left in the third period carried over into overtime and the Continentals took advantage. Hamilton won two faceoffs and put four shots on goal in the first 37 seconds of the extra period. Kuhns finally beat goaltender Hannah Leclair on the fifth shot and touched off the celebration. Maddie Hong ’23 and Nancy Loh ’23 picked up the assists. Neither team scored in the first period but Trinity took six shots on goal during a power play that started with 6:20 remaining. The Bantams went up 1-0 on Lillian Cassidy’s goal 94 seconds into the second period. Trinity’s lead was short-lived as Mya Berretta ’23 tied the score at 4:14 of the second. The teams combined for 19 shots but no goals in the third period. The Continentals took 12 of those shots.
Notes

Kuhns, a defender who had seven shots on goal, scored for the eighth time in her Hamilton career. Evie Sheridan ’26 turned away 29 shots for the Continentals. Sheridan owns a 1.59 goals against average and .937 save percentage this season. Berretta scored her first goal this season and the 19th of her Hamilton career. Hong picked up her 15th career assist and Loh collected her 35th helper and 70th point with the Continentals. Leclair finished with 31 stops. The Bantams were 0-for-4 on the power play. Hamilton is 14-for-15 on the penalty kill this season. The Continentals have won six straight against Trinity and are 8-1-1 in the last 10 meetings with the Bantams. Both teams received votes in the most recent USCHO.com Division III Top 15 poll.
Next Game
Hamilton hosts Endicott College (6-3-1 overall) for a non-conference game on Saturday, Dec. 10 at 7 p.m.