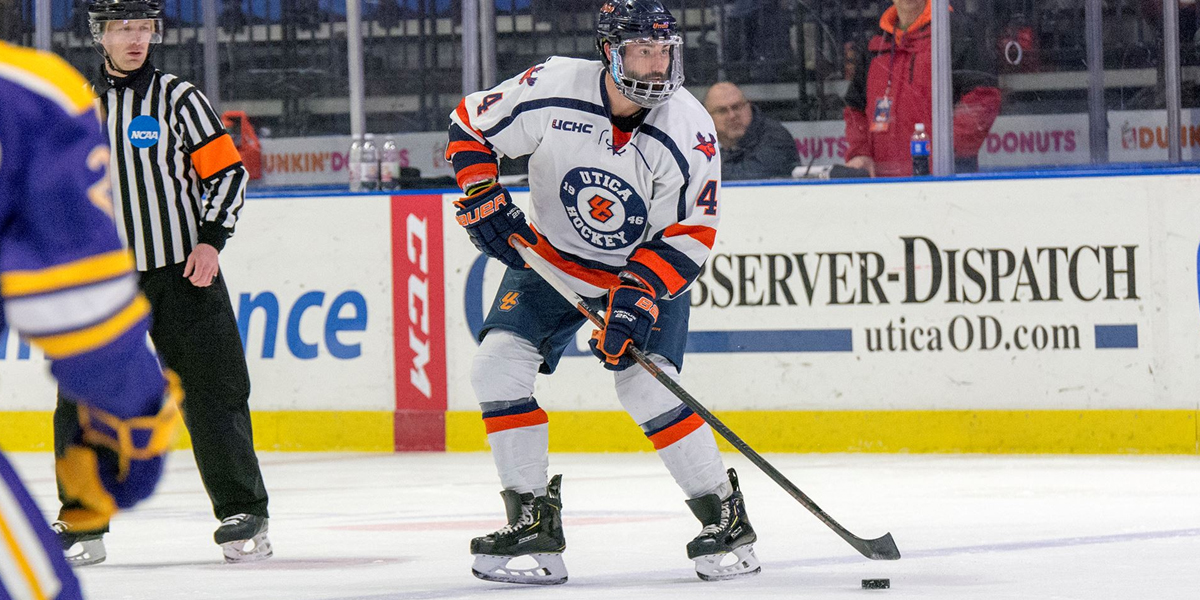 Despite a high scoring result, the first period only saw one goal at 10:36 by freshman phenom Brandon Osmundson (Hampton Roads Whalers). He was assisted by Tyler Dill (Charlotte Rush) and Cameron Bartowski (Amarillo Bulls).

The second period is when Dominick Dawes’ team got on the board. At 3:07 Chris Javens (Skidmore College) lit the lamp with assists from Houston Wilson (East Coast Wizards) and Colin Woods (OCN Blizzard). The Pioneers regained the lead when Rome, NY native Joey Rutkowski (Smiths Falls Bears) slid it past the Mustangs’ goalie Ryan Kenny at 12:32. He was assisted by Brendan Schultz (Topeka) and Justin Allen (Rochester Monarchs). Again, the Mustangs tied it up at 14:46 with a short handed goal when Dominick Brenza (Connecticut Jr. Rangers) got the puck out of their zone and to the tape of Nick Gray (Johnson and Wales). A few minutes later at 18:49, Stevenson took the lead for good when Swede Carl Lyden (South Muskoka Shield) found the back of the net. Christian Ripley (Fort Frances Lakers) was credited with the assist.

On a power play at 3:40 in the third, Austin Master put the Mustangs up by two. He was assisted by Wilson and Gray. Senior Daniel Fritz (Canisius College) created some excitement for Utica College when he was able to rocket one past Kenny with assists from Buster Larsson (Syracuse Stars) and Dante Zapata (Austin Bruins). That goal made Fritz the fourth Pioneer Defensive player to score 50 points in his career. The Pioneers tried to even things up at 18:56 when they pulled UCHC Goaltender of the Week, Sean Dickson (Hampton Roads Whalers). Unfortunately, Gray was able to steal the puck and score on the empty net. Dickson (27 saves) was put back into the game because Stevenson went on the power play. That didn’t stop Kasper Kjellkvist (Curry College) from scoring a short handed goal at 19:49 to pull the Pioneers within one. Fritz and Jamie Bucell (Philadelphia) were credited with the assists.

The Mustangs held on for the win. Kenny ended the night with 18 saves.

After a frustrating loss at Stevenson University on Friday night, The #8 Utica College Pioneers jumped back on their bus and headed west to Pittsburgh, Pennsylvania to take on the Cougars of Chatham University (1-11, 1-6 UCHC).

The Cougars bit first at 6:15 in the opening period. Chad Bell (Nanaimo Buccaneers) got one past Utica’s goalie, Dickson on a power play. Tristan Hillebert (Topeka) and Noah Medalsy (Blind River Beavers) were credited with the assists. Fifteen seconds later, Utica’s Osmundson got the first goal of his natural hat trick with an unassisted score. It was Osmundson again at 12:45 who took a nice pass from Rome, NY native Jaxon Rutkowski (Hampton Roads Whalers) to light the lamp. Chatham’s Matt Mood took advantage of his team’s power play and tied it up at 16:14 in the first. The Pioneers took control of their penalty kill at 19:02 when Dill took a pass from Fritz and got it up to Nick Yzaguirre (Charlotte Rush) for a sweet, short handed score. Dill and Fritz teamed up again to feed Donovan Ott (RPI) for a goal with one second left in the first.

Once again, the Cougars struck first in the second period at 4:08. Emerson Ducasse (Lindsay Muskies) got it past Dickson (18 saves) to bring them within one. Chris Lutz (Soo Eagles) was credited with the assist. At 6:08 Osmundson finished his hat trick with an assist from Kjellkvist. With fuor seconds left in the second Josh Haskin got it past Chatham’s goalie Ricardo Gonzalez (Toledo Cherokee) with assists from Fritz and Kjellkvist.

The third period belonged to Gary Heenan’s team. At 1:00 Kjellkvist decided to take it to the back of the net with an assist from Allen. At 4:46 Kjellkvist would earn his fourth point of the night when he and Yzaguirre fed it up to Cameron Bartkoski (Amarillo Bulls). Utica scored its last goal of the night when Bucell got the puck to Brad Becker (Binghamton Jr. Senators) to seal the lopsided win. Gonzalez ended the night with 39 saves.

The Pioneers end the 2019 portion of their season with the fan favorite, New York Sash Teddy Bear Toss, on Saturday, December 14th against Morrisville State. Puck drops at 7pm and the teddy bears fly after the first Pioneer goal.

Freshman Mae Batherson scored her first career goal, but the Orange fell short in their first College Hockey America game of the season. Syracuse out shot RIT 14-3 in the opening period and finished with a 1-0 lead thanks to Jessica DiGirolamo. She scored her fourth of the year at 11 minute mark of the first.

RIT answered with three straight goals in the second period to take a 3-1 lead before the halfway mark. Syracuse fought back and goals from Victoria Klimek and Savannah Rennie tied the game at three. Batherson’s goal came less than a minute into the third giving Syracuse a 4-3 lead.

Unfortunately, the Tigers scored four goals in the last six minutes of the third to steal the victory. Allison Small made 14 saves for the Orange

After stumbling on Friday night, the Orange got redemption Saturday in Rochester. Syracuse held a 14-3 shot advantage following the first period, but despite two power-play opportunities the game remained 0-0.

Batherson scored a power-play goal at the 9:49 mark to give Syracuse a 1-0 lead. Kelli Rowswell doubled the lead at the 15:03 mark. Emma Polaski sealed the victory with an empty net goal at 16:17 of the third.

Ady Cohen made 12 saves to earn back-to-back shutouts. Cohen was in net for the Orange when they defeated Union 5-0 on Tuesday.

Syracuse has a week off before hosting St. Lawrence on Saturday, November 16th at the War Memorial in Syracuse.

Utica Loses Fourth In A Row