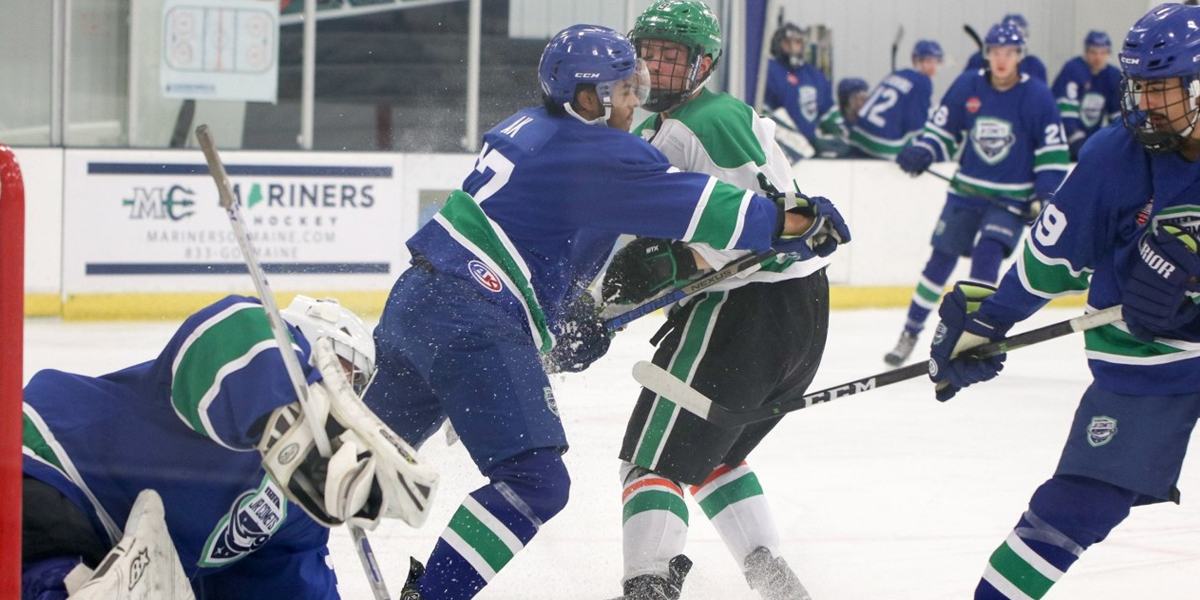 The Premier team continues to prove their dominance in the league stealing much needed points from Twin City on their home ice in Auburn, Maine.

The boys were back at it again in a Friday night bout versus Twin City Thunder. Utica went for the jugular striking at 1:51 in the opening period, on a snipe from Tyler Knicley. The offense was relentless, circling the offensive zone like hungry sharks. Knicley would score a hat trick in the first period alone. Center man Bryce Grennan would snag a goal for himself extending the lead to 4-0 after one period of play.

Twin City’s Alasdair Swett would put his team on the board in the 2nd sneaking a goal past Tripp Clarke unassisted. The game would continue to be a shooting gallery for the Comets with five more players earning points that included Michal Biben, Morgan Clarke-Pizzo, Coby Smith and two more from Knicley bringing his point total to eighteen.

The third period is where this game got interesting as Twin City executed an attack of their own, scoring four unanswered goals. The Comets would pick up two game misconducts from Clarke-Pizzo and Brennan Ash, but they would hold on to claim the gritty win.

Comets stepped in to play a more disciplined and fluid match on Saturday, turning in a near perfect performance.

Twin City tied up the offense for a good portion of the first, but Smith would open the scoring at 16:14 assisted by Logan Dorman (Rome, NY)and Ronald Alesandro (Utica, NY).

By the second period, the Comets found their stride tallying five more goals from four different players including rookie Dorfman recording his 2nd point of the night, Knicley picked up two more goals to bring his season total to twenty, Biben and Anthony Morin found the net as well.

The weekend would showcase the depth and future of the Utica Jr. Comets. With six 2002 birth year players in the lineup (JD Speer, Alesandro, Dorfman, Patrick Janek, Andrew Martino (Utica, NY) and Mike Herrera) who actively contributed to the victory, this is a team with a bright future. Utica remains League and Divisional leaders with the sweep.

Colin Frost would be unflappable in the contest turning away all 33 shots for the shut out.

The Premier team will enjoy a well earned Thanksgiving break, preparing themselves for the second half of their season. They return to the ice on Wednesday, December 4th against Rochester. The game is scheduled for 2:00pm at the ADK Bank Center.