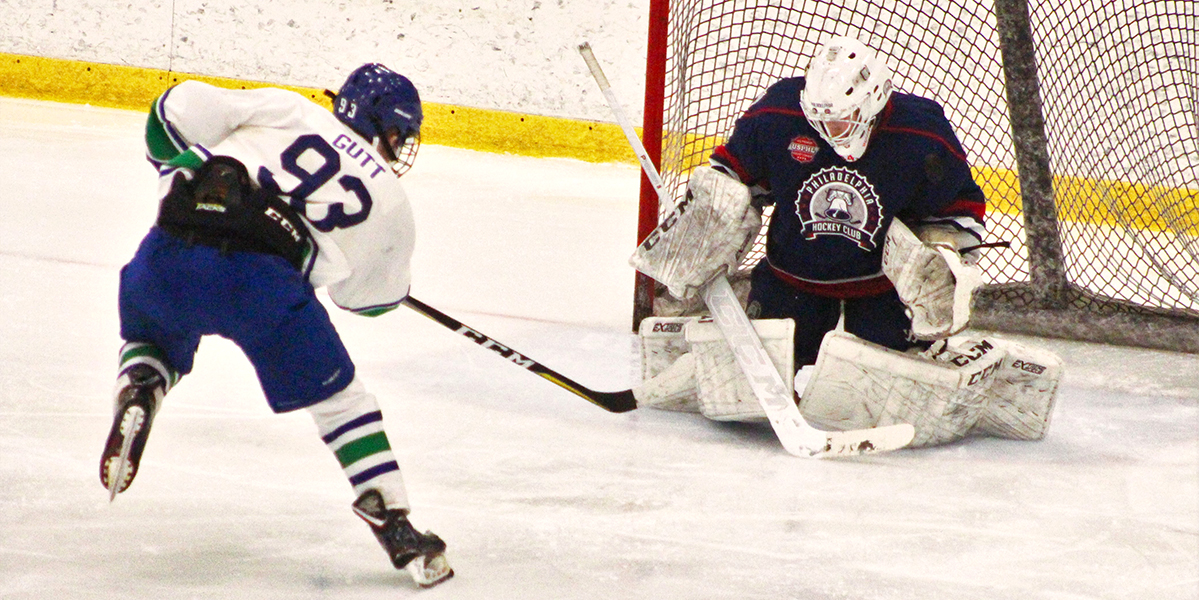 A struggling Knighthawks team crossed paths with the Utica Jr. Comets Thursday evening at Merrimack College. It was the opening game of the Islanders Hockey Club Showcase for both teams.

The Knighthawks fought valiantly, but the Comets simply dominated the match. They boasted goals from points leaders Anthony Morin, Tyler Knicley, and John Gutt. Rookie Andrew Martino, Logan Sutton and Josh Kalinowski all added to the offensive attack as well.

Comets goaltender Henry Bradford stood tall between the pipes stopping all thirteen shots he faced to earn his first shut out of the season.

The Comets squared off against the Motor City Hockey Club in a cross over game from the Mid-West East Division.

Utica remained committed to their style of play which was too much for the younger, smaller Motor City team to handle. The Comets recorded goals from six different players including Tyler Morin with two, Logan Sutton with two, rookie JD Speer banged one home, Solandis Pak, Christian Cupani with two, and closing out the scoring was Dohnavon Jacobson.

The Comets once again had flawless goaltending with Matthew Peterson posting a thirteen save shutout.

The Jr. Comets would face their biggest challenge of the showcase as they faced off against fellow division leader (Mid Atlantic), the Philadelphia Hockey Club, on Friday afternoon.

Utica found themselves having to raise the pace of their game to compete with a crafty Philly Club. Philadelphia would pepper the Comets in the first period with nine quality scoring opportunities. The Comets offense would find their stride in the second with Anthony Morin going top shelf to beat goaltender Mat Badini. Tripp Clarke would remain strong in net, turning away six more shots from Philadelphia.

In the third period Philly’s Devante Dixon would score a power-play goal tipped in front of the net tying up the game 1-1. Utica would battle this one out with point leaders Tyler Knicley and Anthony Morin revealing their offensive prowess both with clutch goals to steal the win from Philadelphia.

Clarke remained one of the top goaltenders in the league after posting his ninth win of the season stopping 28 of 29 shots.

Tampa Bay challenged the Comets with heavy hitters and a quick transition game, but the Comets continued to legitimize their league dominance, accepting Tampa Bay’s challenge and claiming the win.

The Utica Jr. Comets have claimed first place in the Premier Division out of fifty-two teams and remain North East divisional leaders.

Comets Head Coach Lou Educate had this to say about the teams performance over the weekend.

“We obviously have very good group from goaltending out to our defense, and forwards. We still have a lot to prove this season, but as long as everyone is pulling in the same direction and we continue to get better every day this team has the capability to do a lot of damage this season.

I think our guys are starting to believe that we can make something really great out of this season and they are excited for the challenge of being the top team in Premier hockey.”

The team will travel to Auburn, Maine to meet the Twin City Thunder at the Norway Savings Bank this weekend.

Auby Earns Goalie of the Week Honors for Second Time