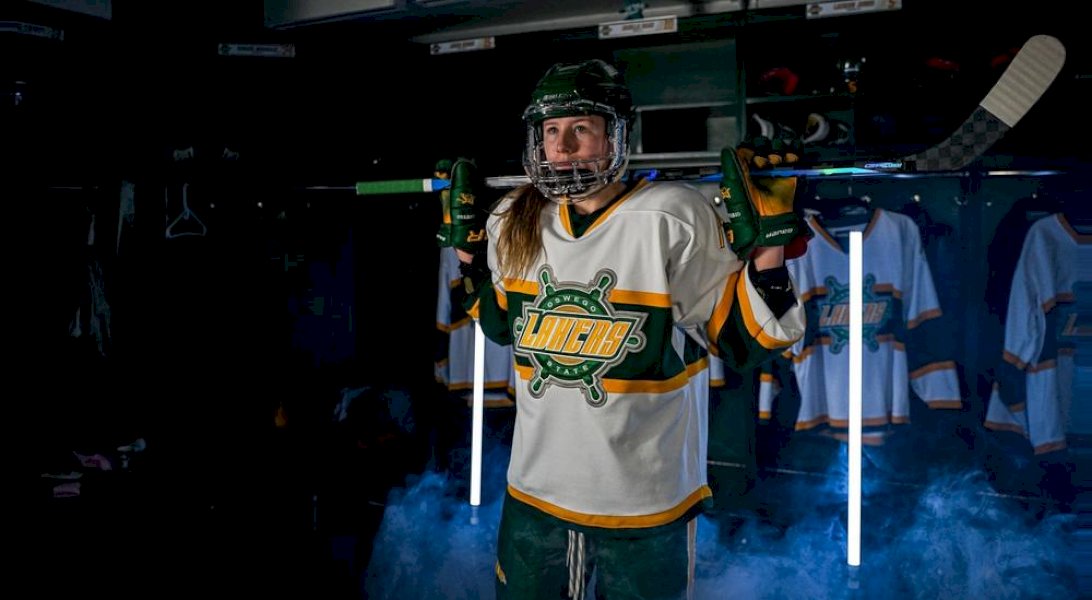 OSWEGO, N.Y.  –  The Oswego State Women’s Hockey team hosted the Potsdam Bears this evening for their Girl’s Hockey Day game. An explosive first period by the Lakers lifted them over the Bears this evening, along with a natural hat-trick from Mack Hull in the third period.

Potsdam would score first on the evening with a goal coming in halfway through the first period. The Bears would lead 1-0.

Oswego would receive a power play 11 minutes into the period, in which Kensie Malone would score the Lakers first goal. Malone would be assisted by Simone Bednarik and Avery Webster.

Just four minutes later, Ashlyn McGrath would give the Lakers the lead, receiving an assist from Ariella Haas and Morgan Shines.

Only 13 seconds later, Tessa Mucha would score another goal for the Lakers, giving them a 3-1 lead over the Bears. Mucha was assisted by Ariella Haas and Ashlyn McGrath.

Lexi Levy would record six saves in the first period of play.

Only seconds into the second period, the Bears would score their second goal of the evening, cutting the deficit to just one.

The remainder of the second period would be scoreless, with Levy recording 11 more saves in the period. Oswego would hold a 3-2 lead going into the final period of play.

Six minutes into the final period, the Bears would tie the game at three with a power play goal.

Just a minute later, the Bears would receive another power play, which helped the Bears take a 4-3 lead over the Lakers.

The Lakers would then receive a power play of their own just under halfway through the period. Mack Hull would tie the score at four, receiving assists from Ariella Hass and Bednarik.

With just five minutes remaining in the final period, Mack Hull would score her second goal of the period, giving the Lakers their second lead of the evening. Hull was assisted by Kensie Malone and Lauren Schell.

Mack Hull completed the natural hat trick with just a minute left in the third, giving the Lakers a 6-4 lead. Hull was assisted by Bednarik and Webster.

The Lakers will stay home tomorrow for a faceoff against the SUNY Canton Kangaroos. The puck drop is scheduled for 3:00pm.

Lakers Tie Bears, Win Shootout To Move On To Championship