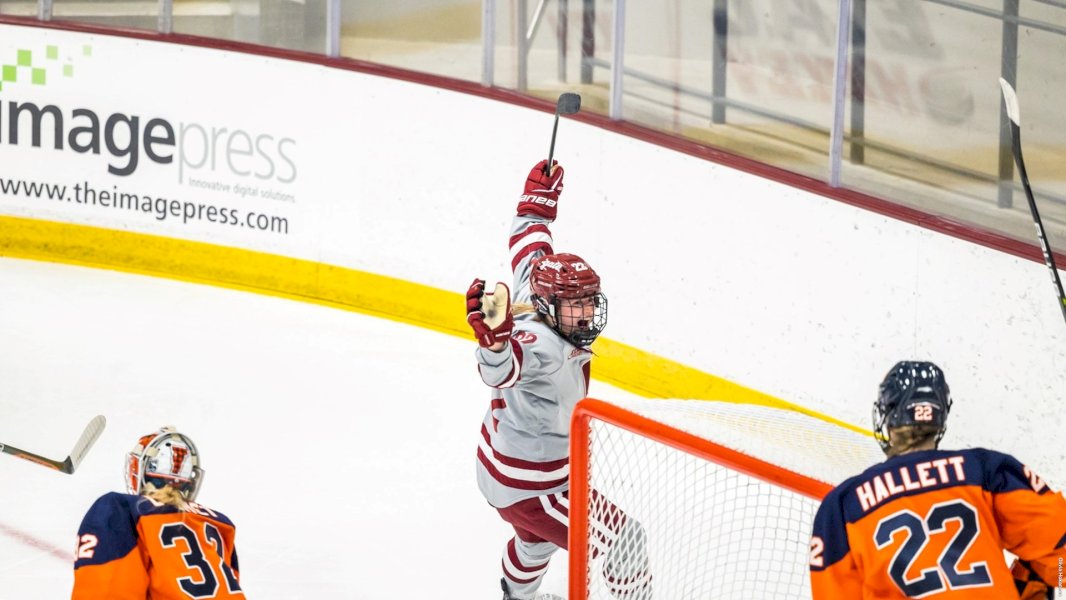 HAMILTON – Colgate kicked off its 2022-23 season Saturday afternoon against Syracuse University in the Class of 1965 Arena. Sara Stewart netted the first goal of her career in the 3-0 win.

Stewart opened up the 2022-23 season midway through the first period, firing one right over the shoulder of the Orange’s keeper.

The Raiders cashed in on back-to-back power plays, with Neena Brick and Kaitlyn O’Donohoe scoring on Syracuse in the second period.

Stewart carried the puck into the Orange’s zone midway through the first period off passes from Sarah Roger and Kayle Osborne, firing one past the keeper short side high for the first of her career. Her goal gave Colgate a 1-0 lead with just under 13 minutes to play.

The Raiders dominated play throughout the first period, registering 13 shots on net while only allowing four.

Neena Brick added herself to the score sheet five minutes into the second period, snipping one past the Orange’s netminder while the Raiders were on the power play as Colgate took a 2-0 lead.

Colgate found the back of the net once again as Kaitlyn O’Donohoe crept in from the corner to rip one short side high. O’Donohoe’s goal put the Raiders up 3-0 by the end of the second period.

The third period started out quiet, as Colgate dominated possession of the puck. Syracuse goalie Arielle Desmet came up big, stopping back-to-back shots from the Raiders.

The Raiders battled throughout the third, firing 11 shots on target and holding the 3-0 lead until the very end.

“It was a lot of fun to be back in the Class of 1965 Arena and playing again in front of a great crowd on homecoming weekend. It was a special night honoring our 2022 ECAC championship and the start of a new journey with this year’s version of our team.

” There was a lot to like about the game and our play. There is plenty of good to take from it and keep building on as we move ahead. Playing these early season games is important, as it showcases where we are at this moment and gives us a roadmap for where we want to go.”

Colgate packs up the buses for a road trip to Pennsylvania as the Raiders face off against Mercyhurst University in a weekend affair. Puck drop is at 6 p.m. Friday, Sept. 30, and 2 p.m. Saturday, Oct. 1.