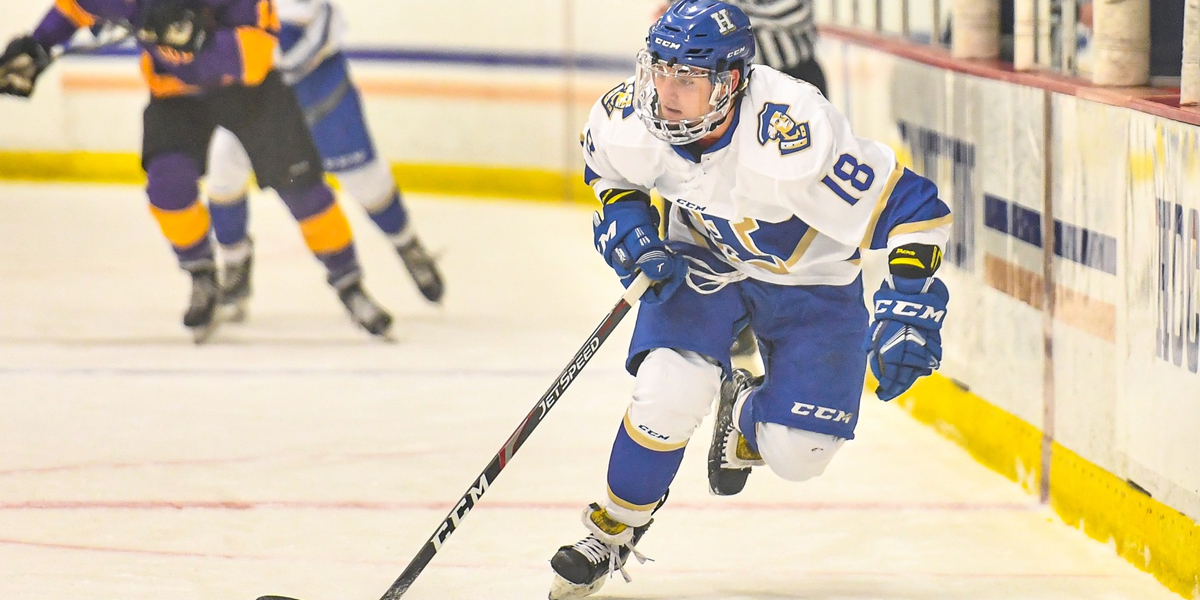 All of the scoring took place in the first nine minutes of the game, and despite out-shooting their opponent 37-20 Hamilton lost this one 2-1.

The Bowdoin goaltender finished with 36 saves, 17 of which came in the first period. Anthony Tirabassi finished with 18 saves and didn’t allow a goal in the last 54 minutes of the contest.

Bowdoin scored first at 2:01 of the first period on a slap-shot from just inside the blue line. The Polar Bears doubled their lead on a wrap around at 5:28. Hamilton scored its lone goal at 9:13 of the period while on the power-play.

Sean Thomson rushed the puck up the right side into the offensive zone. Once in the zone he fed a pass across to Jordi Jefferson who one-timed the puck into the goal. Sean Allen also picked up an assist on the play. The next two periods passed without any more goals being scored. Hamilton pulled Tirabassi with 2:37 left in the game, but only managed one shot on goal with the extra attacker.

Hamilton scored three first period goals and added one more in the second en route to a 4-2 victory over the Colby Mules. The win was the first road victory for the Continentals this season.

Hamilton opened the scoring 4:02 into the game. Sterling Bray raced down the ice and fired a shot on goal. The Mules goalie blocked the puck with his shoulder, but slid out of the crease in the process. Bennett Morrison was there to pick up the rebound and fire it into the net.

The lead was doubled at 7:24 of the period on a Jefferson breakaway goal. Jefferson picked up a bouncing puck in the neural zone and broke in alone against the Mules goalie. Jefferson fired a wrist shot over the goalies shoulder that sent his water bottle flying into the air.
Colby narrowed the lead to one when they converted on a rebound with under five minutes to play in the first. The game was tied at 2 with 1:13 left in the period after Mules one-timer goal. Hamilton scored 24 seconds later to regain the lead. Joey Moore fired a slap shot through a sea of players that found its way into the back of the net. Hamilton cemented the victory with an insurance marker at the 5:01 mark of the second. The Mules were caught in a line change which allowed Hamilton to move the puck from their defensive zone up to the offensive blue line in one pass. Tommy Tanner carried the puck into the corner before he found Nick Ursitti out front. Ursitti snapped a shot high and into the back of the net for his fourth goal of the season.

The Mules pulled their goalie with 1:29 left in the game. They managed two shots on goal, but Tirabassi (20 saves) turned them aside.

Hamilton is back on the road again this weekend when they take on Tufts (Malden, MA) Friday at 7pm and Connecticut College (New London, CT) Saturday at 3pm.