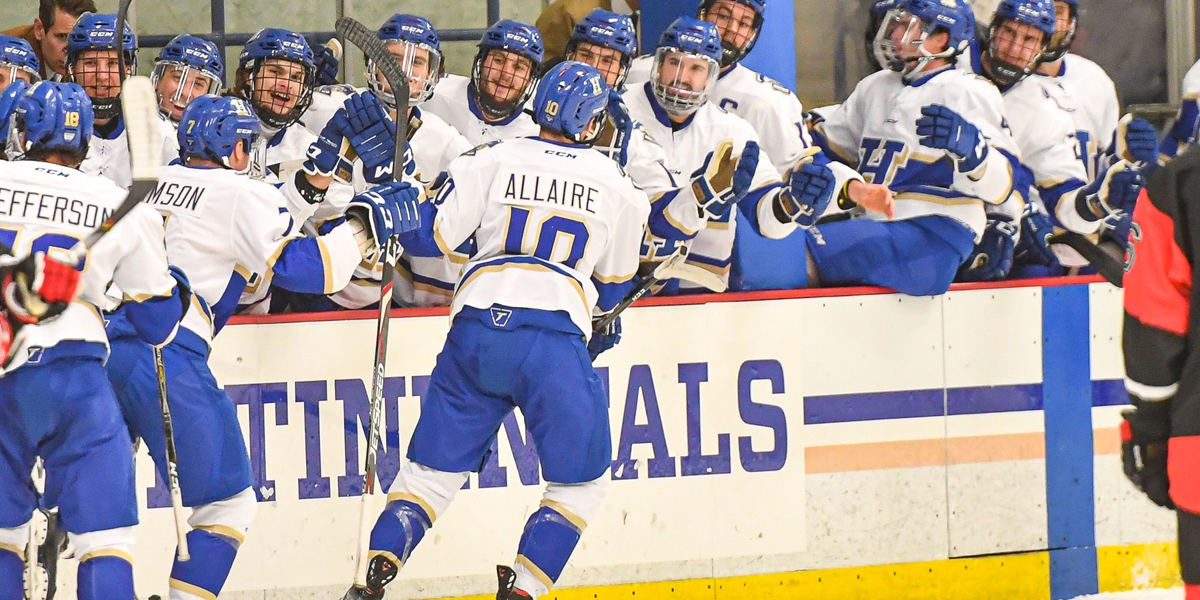 Hamilton earned their first NESCAC victory of the season on Friday night. Freshmen Fred Allaire and Nick Hawkins who both scored their first career goals in a 5-4 victory.

Wesleyan took an early 1-0 lead on its first power-play opportunity of the game. Anthony Tirabassi (21 saves) stopped the initial shot, but the rebound was flipped over his left shoulder and into the net. Allaire knotted the game at one with help from Sean Thomson at 9:18 of the period. Thomson fired a shot on goal that was deflected by Allaire past the Wesleyan goaltender. The Cardinals took a 2-1 lead into the second intermission following a goal with 6:50 remaining.

Hamilton started a second period scoring frenzy with goals by Nick Rutigliano and Nick Ursitti exactly two minutes apart. Wesleyan responded nine seconds later tying the game at three. Hawkins scored his first career goal a minute and a half later at 10:49 to regain the Continentals lead. The go-ahead goal was assisted by Teddy Simson and Urisitti.

Chad Varney added an insurance goal at 2:07 of the third with Josh Labonte and Allaire picking up assists. Wesleyan pulled within one goal at 6:19, but the defense and Tirabassi stood tall securing the win.

After scoring in the first period to take a 1-0 lead, Hamilton allowed two second period goals to #8 Trinity College and fell by a score of 2-1.

Jordi Jefferson put the Continentals on the board at 9:24 of the first period. Sean Allen intercepted a Trinity clearing attempt and sent a slap shot on net. Jefferson tipped the shot from just outside the face-off circle and redirected it past the Bantams goalie.

Trinity capitalized on a 5-on-3 power-play opportunity only 3:30 into the second to tie the game up. Trinity scored again with under three minutes left in the second to take a 2-1 lead that they would not relinquish.

Ursitti nearly tied the game early in the third period when he hit the crossbar on a breakaway. Hamilton was 0-for-5 on the power-play and late in the game with goaltender Sean Storr (34 saves) pulled they only managed one shot on goal. The 34 saves tie a career high for Storr.

The loss was Hamilton’s first at home this season. Trinity has only allowed four goals though their first four games of the season.

Hamilton travels to SUNY Canton Tuesday for a 4pm non-conference game. The Continentals will then host SUNY Canton Saturday at 7pm.

Hamilton Drops Both In Weekend Series At Williams