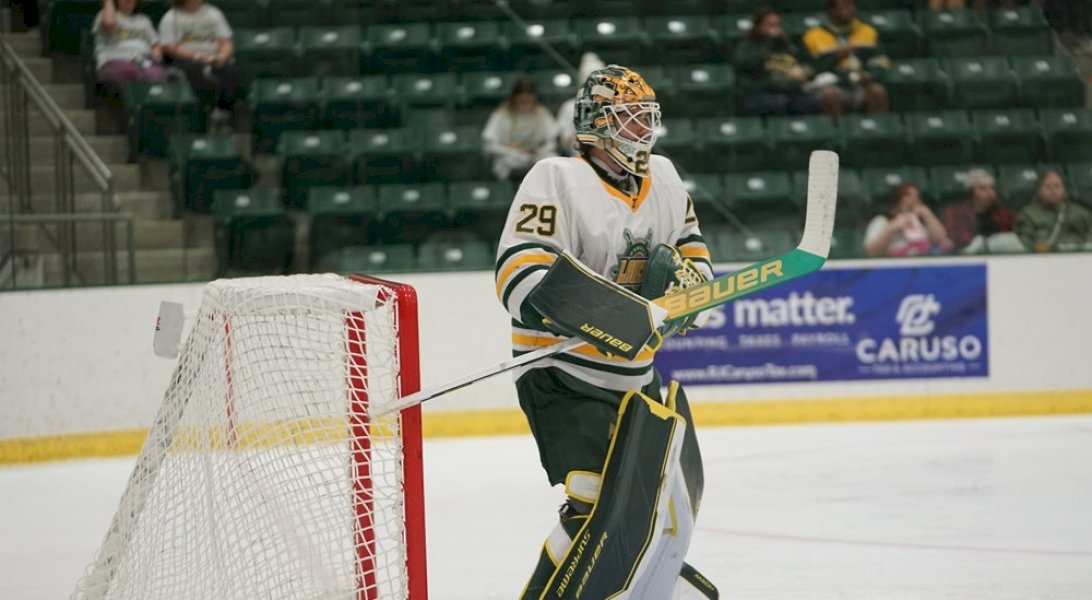 FREDONIA, N.Y.  –  The Oswego State Men’s Hockey team defeated the Fredonia Blue Devils in a one-sided contest that saw a goal for the Lakers in every period, and a shutout by Eric Green.

Oswego outshot the Blue Devils in the first period, 12-8. The Lakers also won eight of the 13 faceoffs for the period.

13:20 into the first period, Noah Bull found the back of the net off an assist from Matt McQuade and Ryan Bunka to give the Lakers a 1-0 lead. It was Bull’s second goal of the year.

Eric Green had eight saves in the first period.

The second period saw the Lakers again outshoot the Blue Devils 11-5. They also won 15 of 23 faceoffs.

Troy Robillard scored his first goal of the season off an assist from Garrett Clegg and Brett Fudger with almost three minutes into the period. This gave the Lakers a 2-0 lead

The Lakers continued to keep the pressure on in the third period, this time outshooting Fredonia 14-5.

With just over four minutes to go in the game and on a power play, Alex DiCarlo cashed in on his eighth goal of the season to seal the victory for the Lakers off an assist from Quinn Warmuth and Daniel Colabufo.

Eric Green had 18 saves for the game.

The Lakers also demonstrated their limiting of penalties by killing both of the ones they faced in the game, while capitalizing on one of Fredonia’s five penalties.

The men will Return home to Oswego to face Saint Anselm College on December 30 for Faculty and Staff Appreciation Night.