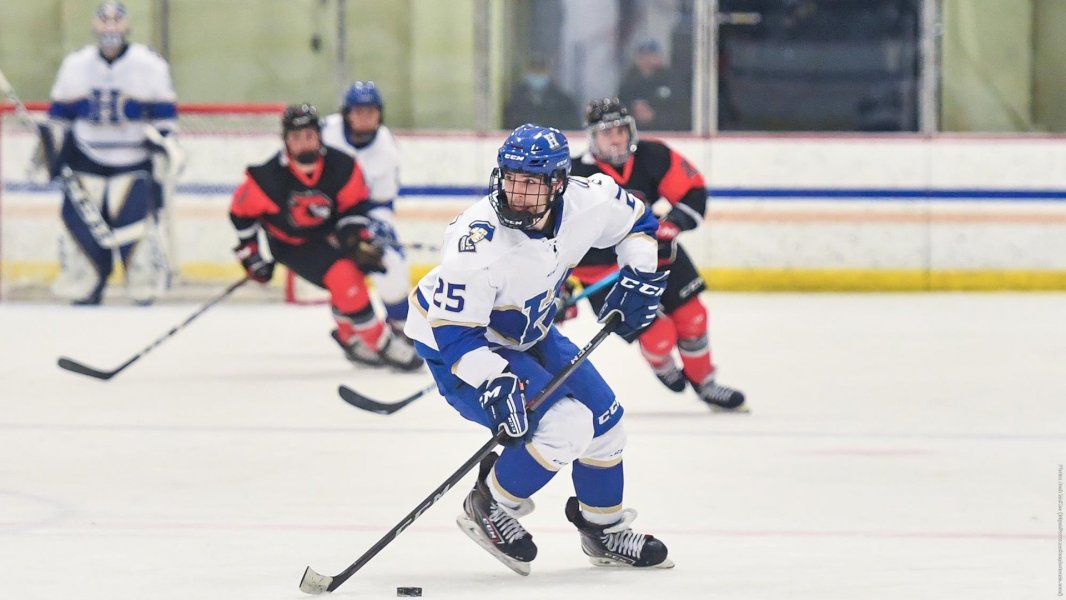 Hamilton College’s Grisha Gotovets ’25 scored one minute into the sudden-victory overtime period and the Continentals pulled out a 2-1 NESCAC win against the Bowdoin College Polar Bears at Bowdoin’s Watson Arena on Friday night.

Gotovets also scored the overtime game-winner against Trinity College in Hamilton’s previous game on Jan. 29. The Continentals evened their overall record at 7-7-0 and their conference record at 6-6. Fred Allaire ’23 won 14 of 16 faceoffs and Sean Storr ’22 made 27 saves.

As the teams skated 3-on-3 in the extra period, Gotovets pulled across the goal face from left to right and waited for Kozic to commit. Gotovets eventually slid a low shot across the ice and past Kozic for his sixth goal. Gotovets leads the team with 11 points.

Cade Groton ’23 gave the Continentals a 1-0 lead with his second goal this season 4:27 into the first period. Groton forced a turnover directly in front of the Bowdoin net and converted his opportunity.

Hamilton had a promising look midway through the second frame. Owen Luft ’25 received a stretch pass down the left-side boards and tried to roof a shot near side, but the puck bounced off the side netting.

The Continentals held on to their 1-0 edge until early in the third period. Chris Brown scored a power-play goal for the Polar Bears on an assist from Luke Wheeler 28 seconds into the third.

Hamilton had its chances to regain the lead later in the period. Kozic broke up a 3-on-1 by poking the puck off the stick of Matt Gellerman ’24 with four minutes left. Bowdoin’s Cam Berube made a key defensive play as time expired, blocking a cross in the slot on a 2-on-1.

The Continentals play another NESCAC game at nationally ranked No. 15 Colby College on Saturday, Feb. 5 at 3 p.m.

Women’s hockey loses offensive shootout to No. 9 Colby in overtime