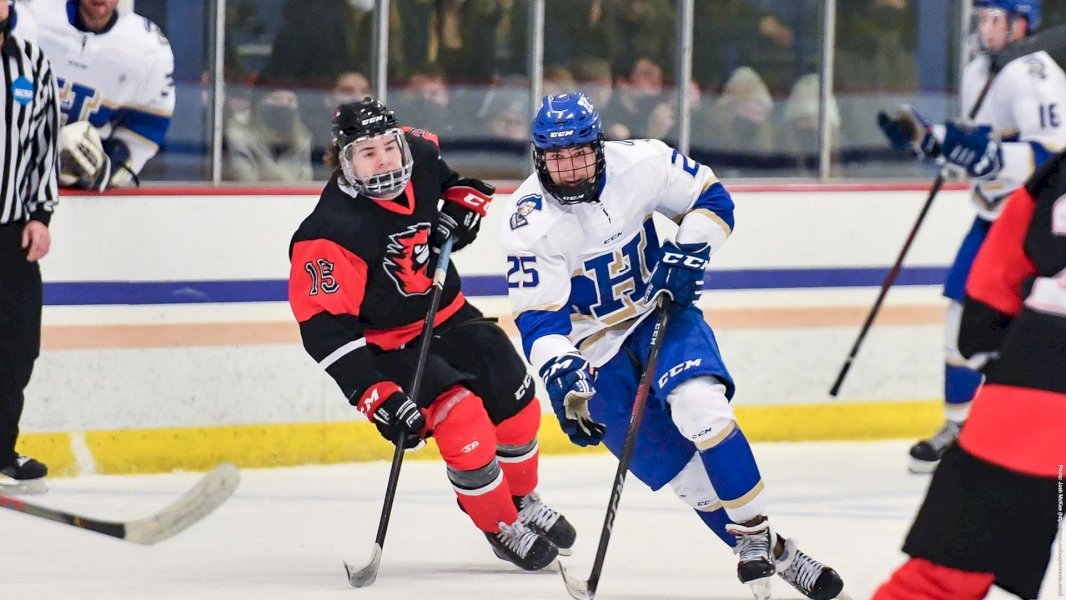 Hamilton College’s Grisha Gotovets ’25 scored 56 seconds into the sudden-victory overtime period and the Continentals pulled out a 4-3 NESCAC win against the Trinity College Bantams at Hamilton’s Russell Sage Rink on Saturday afternoon.

The Continentals (6-7-0, 5-6 NESCAC) prevailed in overtime for the first time in three opportunities this season. Hamilton swept the season series from Trinity, thanks to a 3-2 win in Connecticut back on Dec. 4. The Continentals play another conference contest at Bowdoin College on Friday, Feb. 4 at 7 p.m.

The Bantams dropped to 9-7-0 overall and 7-5 in the NESCAC. Trinity was 0-for-5 on the power play, including a 5-on-3 chance for 57 seconds late in the first period. Patrick Pugliese made 31 saves, Lucas Michaud won 16 of 27 faceoffs, and John Campomenosi blocked three shots.

Gotovets finished with a goal and an assist for the winners. Fred Allaire ’23 scored two goals and Jordi Jefferson ’22 picked up two helpers. Allaire recorded his first multi-goal game at Hamilton while Jefferson is second on the team with six assists and tied for the lead with 10 points. Allaire also won 20 of 31 faceoffs and blocked three shots. Charlie Archer ’25 collected the win and made 27 stops in his first start for the Continentals.

Scott McKenzie ’25 stole the puck behind the Hamilton net as the teams skated 3-on-3 in the extra period. He skated all the way up ice into the Continentals’ offensive zone and when he reached the bottom of the right faceoff circle, he passed to a trailing Gotovets who one-timed a shot into a wide-open net from the slot. Gotovets has five goals and is tied with Jefferson for the team lead in points with 10.

Hamilton took a 1-0 lead 3:05 into the first period. Jefferson forced a turnover in the Continentals’ offensive zone and took a shot from the right-side boards that deflected off a defender and ended up on Allaire’s stick. Allaire skated into the high slot and launched a wrist shot through traffic into the back of the net.

Ned Blanchard tied the score at 7:57 of the first. Blanchard collected a loose puck in his own zone and carried it into the Trinity offensive end where he sent a backhand shot from the dot in the left faceoff circle. The change-of-pace shot slipped under Archer and trickled across the goal line. Jax Murray put the Bantams in front 42 seconds later with a high wrist shot from above the left faceoff circle that beat Archer on his glove side.

Allaire tied the score with 4:59 left in the first. Pugliese tried to clear a loose puck that Nick Hawkins ’23 had carried into the zone. Jefferson intercepted the attempt and put a shot on Pugliese that he stopped but didn’t hold. Allaire pounced on the rebound near the left post and scored his third goal this season.

Neither team scored in the second period but things got interesting in the third. Hamilton had a two-man advantage for 65 seconds midway through the period but didn’t score. The Continentals finally got one with 39 seconds left in the 5-on-4. Following a faceoff win, Jeremy Smith ’24 passed from above the left faceoff circle to Nick Rutigliano ’22 near the blue line. Rutigliano skated forward and snapped a wrist shot through a screen from the top of the right faceoff circle for his fourth goal with 7:22 remaining.

Devan Tongue tied the score again with 6:03 to go. Archer made a kick save on a long wrist shot by Theodore Griffin, but Tongue eventually found the loose puck and tipped it in from just outside the crease.