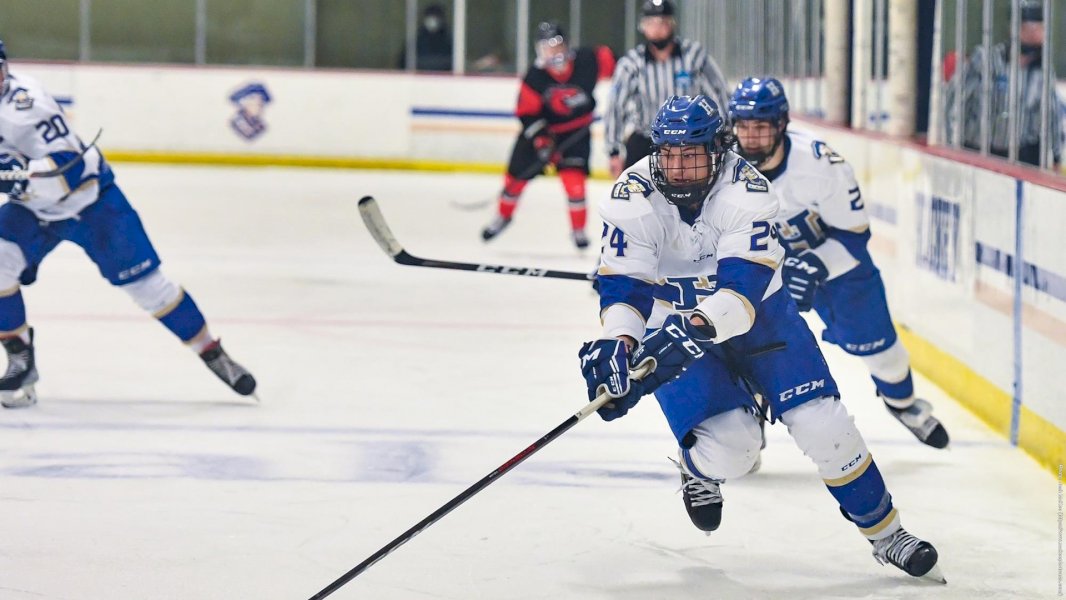 Hamilton moved over .500 at 9-8-0 overall and 8-7 in the conference. The Continentals host Tufts University for another NESCAC game on Sunday, Feb. 13 at 4 p.m. The contest has been postponed twice.

Gellerman added an assist for a four-point night, and he leads the conference with 11 goals. Grisha Gotovets ’25 chipped in a goal and an assist, and Cade Groton ’23 and Carter Dwyer ’23 picked up two helpers apiece. Sean Storr ’22 made 17 saves, Fred Allaire ’23 won 15 of 21 faceoffs and Groton won 10 of 13.

Michael McHale turned away 29 shots and Colin McCabe blocked three shots and had an assist for the Camels (5-11-3, 4-9-2 NESCAC). Conn. College was 0-for-5 on the power play.

Hamilton scored the first four goals and hung on in the third period. The Continentals went up 1-0 with 2:13 left in the first period. Gellerman and Gotovets created a 2-on-1 break with Gotovets taking the puck down the right side. He passed to Gellerman in the slot and Gellerman deposited the puck in the back of the net.

Gotovets made it 2-0 at 5:12 in the second period. Sean McAvoy ’23 skated with the puck all the way up the right side and across the goal line. McAvoy sent a backhand centering pass to Gotovets just outside the crease and he stuffed the puck past McHale for his seventh goal.

Gellerman gave Hamilton a three-goal lead with 41.8 seconds remaining in the period. Jeremy Smith ’24 tried to dump in the puck along the left-side boards but it caromed out into the faceoff circle where Gellerman picked it up. He skated towards the left post and scored on a backhand shot.

Gellerman completed the hat trick at 7:34 of the third period. Groton won an offensive zone faceoff on the left side, lunged for the loose puck and knocked it over to Gellerman just outside the crease where he whacked it past McHale. Younghoon Choi finally put the Camels on the board while the teams skated 4-on-4 at 9:49 of the third. Seth Stadheim pulled Conn. College within two with 7:41 to go when he scored during a delayed penalty situation.

Scott McKenzie ’25 closed out the scoring with 47.4 seconds left. He got possession of the puck in his own zone, skated past a Camels defender and scored on an empty net for his second goal this season. Conn. College had pulled McHale for an extra skater with 1:21 remaining.