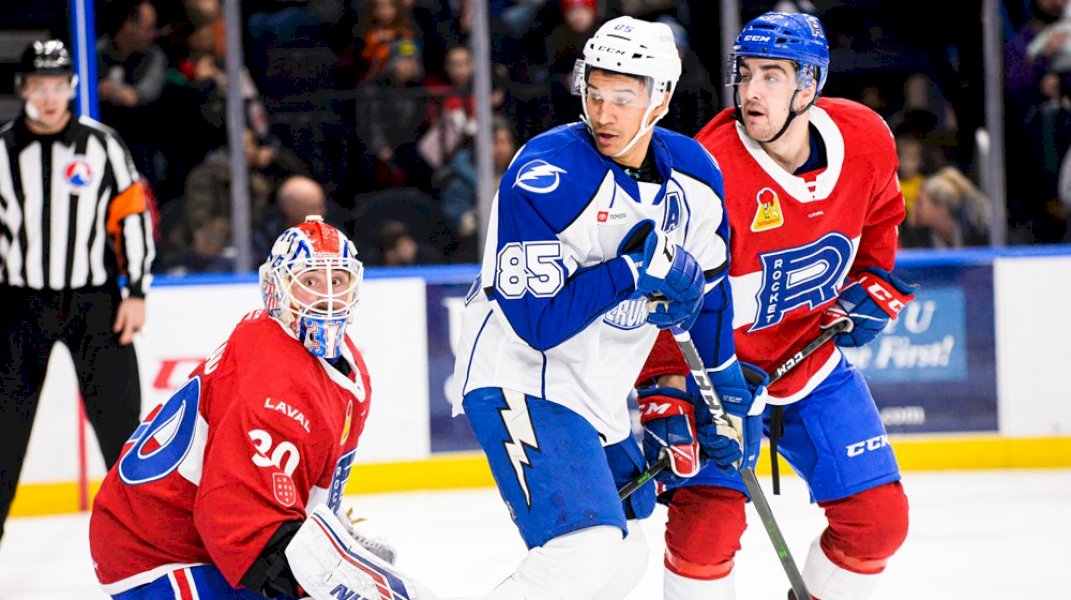 CRUNCH LOOK TO REGROUP AGAINST ROCKET

The Crunch play the middle game of their three-game homestand as they host the Laval Rocket for the first time this season. It’s the first of eight head-to-head meetings in the regular season.

The Rocket (4-3-1-0) had the night off and have not played since losing a pair of home games to the Rochester Americans last weekend. They carry a 1-2-0-0 road record into the night.

The Crunch fell to the Utica Comets, 6-3, last night.

Despite a strong start for the Crunch, Utica grabbed a 1-0 lead on a Tyce Thompson power-play goal at 6:03 of the first period. Gage Goncalves responded for the Crunch at 8:48 on a goal from the right circle to level the game 1-1.

The Comets pulled ahead in a high-scoring second period that saw Thompson complete his first career hat trick. Charles Hudon netted the only goal in the period for the Crunch, who trailed 5-2 after 40 minutes.

Gabriel Dumont tipped home a power-play goal in the third period, but Utica answered that goal later in the game and prevailed, 6-3.

The Crunch enter the final game of the weekend with a 4-3-1-0 record and they are tied for fifth in the North Division.

There is a four-way tie for the team lead in scoring between Charles Hudon, Sean Day, Gabriel Dumont and Jimmy Huntington. Hudon has posted power-play goals in two successive games. The Quebec native is currently at a point-per-game pace, seven points in seven games, riding momentum off of his second multi-game point streak of the season. Hudon spent the first six years of his pro career with the Canadiens organization and played for the Rocket in 2019-20.

Remi Elie secured his first point of the season with a power-play assist last night on a Gabriel Dumont goal. Elie got a late start to the season, introduced in the Crunch’s sixth regular-season game after being sidelined due to injury. The winger amassed 93 points (42g, 51a) in 211 games in six seasons with the Texas Stars and Rochester Americans before signing with the Tampa Bay Lightning this summer.

Cole Koepke got back on the scoresheet last night after being held scoreless in the previous two games. The forward notched two assists for his first multi-point game this season. Koepke had three points (2g, 1a) in nine games played at the end of last season. The rookie has already surpassed that total with five points (1g, 4a) in six games played.

The Rocket come into play with an identical record to the Crunch, 4-3-1-0. The Rocket dropped back-to-back games to the Rochester Americans last weekend at home, ending a four-game win streak.

The Rocket welcome a fresh face to the team tonight, as Cole Caufield was loaned from the Montreal Canadiens on Monday. The 20-year-old forward had one assist in 10 games with the Canadiens. In 20 Stanley Cup Playoff games last year, the Wisconsin native racked up 12 points (4g, 8a) in 20 games to help Montreal advance to the Stanley Cup Final, where they fell to the Tampa Bay Lightning. Caufield had four points (3g, 1a) in two games for Laval last season after he joined the team following his Hobey Baker Award winning season for Wisconsin.

Laurent Dauphin leads the Rocket in points this year with eight (6g, 2a) in eight games. His six goals place him in a seven-player tie for second in the league along with Crunch forward Jimmy Huntington.

Laval is the first team from Canada to visit Upstate Medical University Arena since Jan. 10, 2020 when the Rocket last visited. The Crunch’s last game against a Canadian team was March 7 at Toronto.

The Canadian teams played in their own division last season due to border restrictions caused by the pandemic.

Tonight is the first of eight matchups between the Crunch and the Rocket and the first of four at Upstate Medical University Arena.

Crunch defenseman Sean Day will play in his 100th career AHL game tonight against the Rocket. Splitting time between the Crunch and Hartford Wolf Pack, the 23-year-old has racked up 40 points (8g, 32a) in his first 99 AHL games.

HOME POWER PLAY BACK IN ACTION

Amid their 6-3 loss to the Comets last night, a lone bright spot for the Crunch was scoring their first two home power-play goals of the season. Charles Hudon broke the streak for the Crunch with a power-play marker in the second period and Gabriel Dumont added the second in the third period. The Crunch are 2-for-14 (14.3%) at home on the power play versus their 27.3% success rate (6-for-22) on the road.

The Rocket come in with the second-best road penalty kill in the North Division (92.9%), just behind the Crunch (94.1%). They have allowed just one power-play goal in 14 shorthanded situations away from Place Bell.

Amir Miftakhov is expected to start in goal for his third start of the season. The Kazan, Russia native has been stellar in two outings, posting two wins with a 1.91 goals-against average and 0.930 save percentage. The 21-year-old made his AHL and North American professional debut at Hershey Oct. 27 with 29 saves in 3-2 overtime win. He stopped 24-of-26 in his second appearance, another 3-2 overtime win, last Saturday at Lehigh Valley.

Miftakhov started the season in the ECHL with the Orlando Solar Bears, but was reassigned to the Crunch after Max Lagace was injured on opening night at Cleveland.