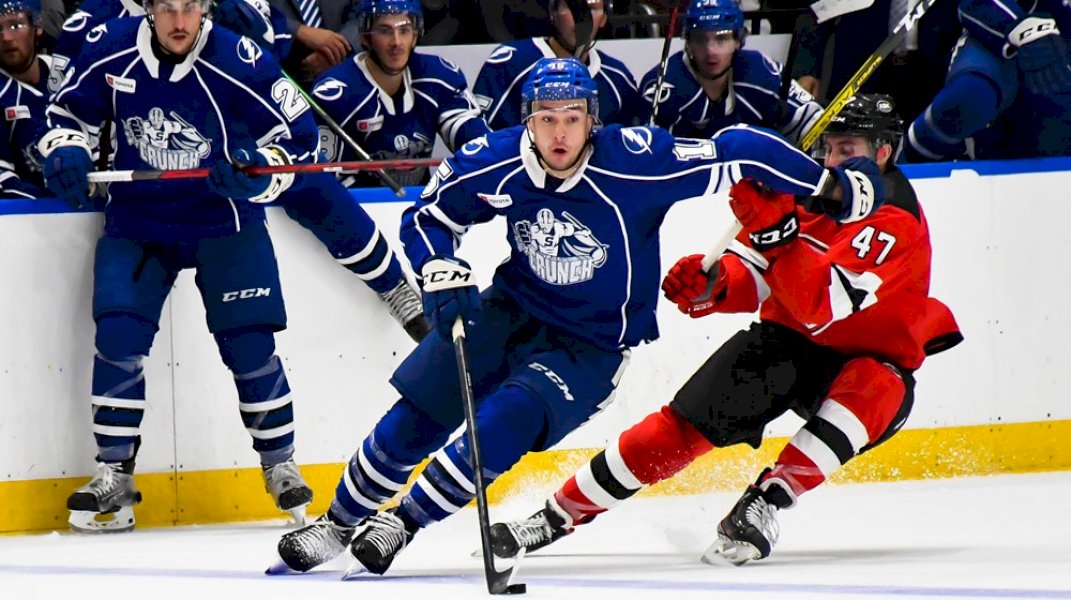 After a pair of successful road trips over Halloween weekend, the Crunch ride a three-game win streak into a three-game home-stand. All three games went past regulation last week.

The Crunch enter a battle with the rival Comets looking to make it four straight wins for the first time since April 17-25, 2021 when they ripped off five in a row.

The Crunch rallied from two one-goal deficits to defeat the Lehigh Valley Phantoms, 3-2, in overtime Saturday.

The Phantoms grabbed a 1-0 lead just 2:33 into the first period on a scramble goal by Gerry Mayhew. Charles Hudon responded late in the period to tie the game at one, collecting a loose puck and firing home a power-play goal at 19:36.

Lehigh Valley again went up by a goal in the second period as Morgan Frost scored on a rush up ice 5:09 into the frame. The Crunch pulled even in the third period as Gabriel Dumont turned and rifled home his third goal of the season at 4:30 to knot the game 2-2.

The Crunch earned their third straight win as Jimmy Huntington potted a rebound 1:01 into overtime for his team-leading sixth goal.

The Crunch enter today at 4-2-1-0 and rank fourth in the North Division with a 0.643 points percentage.

Antoine Morand is tied for the team lead in assists among forwards (4) and he has five points (1g, 4a) this season. The Quebec native appeared in his 100th career AHL game last week.

Charles Hudon has six points (3g, 3a) in six games played, ranking second on the team behind Jimmy Huntington (7). He finished with four points in three games last week, including a pair of multi-point performances. Early in the season he is on a point-per-game pace; his highest output in a single season was in 2014-2015 with the Hamilton Bulldogs with 57 points (19g, 38a) in 75 games played.

Defenseman Sean Day leads Crunch defensemen in offensive production with 6 points (1g, 5a) in seven games played. He’s recorded four points, all assists, in his last three games, which has supplemented Syracuse’s three-game win streak. Day set AHL career highs last season with 15 points (3g, 12a) in 29 games. Day, 23, enters his second season with the Crunch and he is in line to appear in his 100th career AHL game this week; he has 39 points (8g, 31a) in 98 AHL appearances.

Out of their 11 instances of three or more consecutive overtime games, this week was just the second time the Crunch won all three games (also March 26-29, 2008).

The Comets come into action leading the North Division. They are undefeated through four games this season and they have allowed just six goals in that span.

Alexander Holtz and Chase De Leo are tied for the team lead in points (5). Holtz leads the way with five goals and De Leo has five assists. Holtz, the seventh overall pick in the 2020 NHL Draft, was recalled to New Jersey this week.

Comets goaltender, Akira Schmid, has played just two games this season, but he ranks second in the AHL in goals against average (0.97) and save percentage (.966). Nico Daws has started the other two games for Utica; he also earned a win in two NHL appearances with the Devils.

Tonight will be the second of 14 matchups this season between the Crunch and Comets, with the winner of the series taking home the Galaxy Cup at the end of the year. The trophy currently resides in Syracuse after the Crunch went 7-5-2-0 against Utica in 2020.

The Comets spoiled the Crunch’s home opener in the first matchup behind Akira Schmid, who tallied 32 saves in his second career AHL appearance.

Gage Concalves netted the only goal for Syracuse in the game. The Crunch haven’t dropped back-to-back home games to Utica since 2017.

THERE AND BACK AGAIN

Gabriel Dumont returns following his recall to Tampa Bay. He did not dress in any game for the Lightning.

Dumont scored his third goal of the season in last weekend’s overtime win over the Lehigh Valley Phantoms. The veteran forward’s five points (3g, 2a) place him fourth on the team, one point back of Sean Day and Charles Hudon and two back of leader Jimmy Huntington.

The Crunch signed Evan Wardley to a PTO on Wednesday. Wardley is a 27-year-old defenseman who spent parts of the past three seasons in the ECHL with the Wheeling Nailers and Idaho Steelheads.

In 47 regular season games and six playoff games in the ECHL, the Vulcan, Alberta native racked up six points (1g, 5a) and 115 penalty minutes.

LOHAN IN THE SALT CITY

On the blue line, defenseman Kevin Lohan makes his home debut for the Crunch. The Long Island native made his AHL debut at Lehigh Valley.

The 28-year-old boasts extensive experience in the ECHL. He is in his fourth season with the Orlando Solar Bears and was named captain. Lohan amassed 163 games at that level after five seasons of collegiate hockey in the NCAA with the University of Michigan and Boston College.

COMETS HIT THE ROAD FOR SYRACUSE