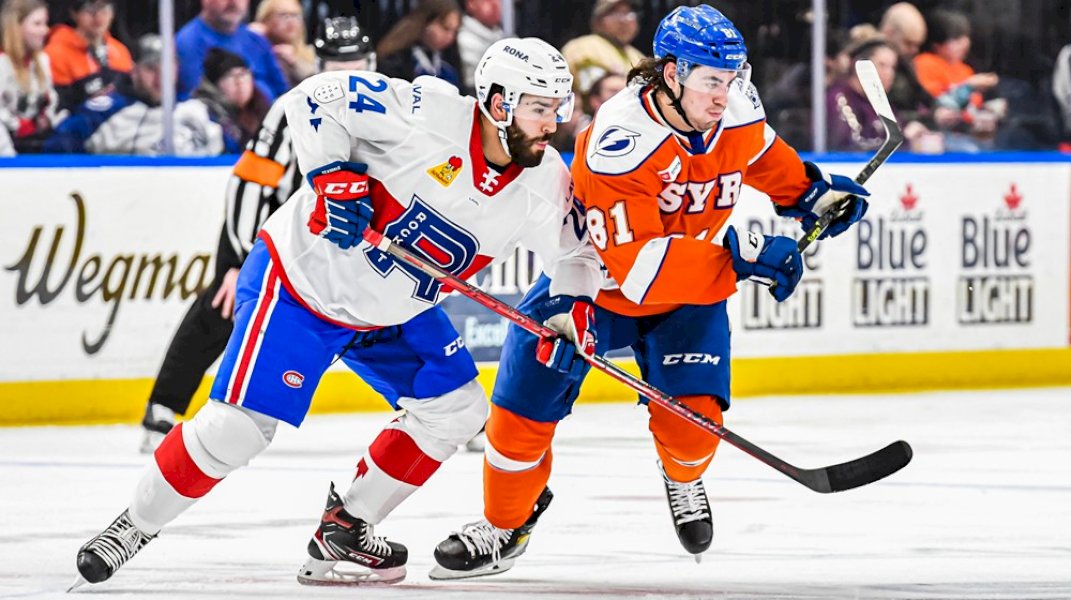 The Crunch play their 76th and final regular season game tonight as they host the Laval Rocket in a potential North Division Semifinals preview.

The Crunch (41-25-7-2) earned their sixth straight win overall, and their 12th consecutive victory on home ice, last night to lock up second place in the North Division.

Laval (38-26-5-2) earned three of four points in a two-game set against Toronto, and the Rocket need just one point to earn third place and a playoff date with the Crunch.

The Crunch cruised to a 12th straight home win with a 4-1 victory against the Wilkes-Barre/Scranton Penguins last night at Upstate Medical University Arena.

Remi Elie logged a multi-point game, starting with the game’s first goal 12:48 into the first period. He accepted a pass and blitzed his way to the right circle before scoring inside the far post for his 17th goal this season.

After the Penguins tied the score at one on a goal from Radim Zohorna, Elie set up Simon Ryfors on a 2-on-1 rush to put the Crunch back ahead. Later in the second period Gabriel Dumont one-timed a power-play goal for his 30th tally of the season to put the Crunch up 3-1.

Alex Green scored into an empty net in the third to help secure Max Lagace’s 23rd win of the season.

Over those 13 games, the Crunch have outscored opponents 53-27. They have scored at least four goals in eight of the 12 games and they’ve given up two or fewer in eight games.

The Crunch have secured home ice advantage in the North Division Semifinals by clinching second place.

Syracuse will host Game 1 and 2 of the North Division Semifinals next Friday and Saturday, May 6-7, at Upstate Medical University Arena. The Crunch’s opponent depends on today’s results; Syracuse will face Laval in that series if the Rocket pick up a point tonight or if Belleville loses in any fashion this afternoon versus Toronto. The only scenario that has Belleville finishing in third place and facing the Crunch is if the Senators win and Laval loses in regulation.

The Rocket sit third in the North Division with a 38-26-5-2 record this season. Laval is 5-3-2-0 in their past ten games after earning three of four possible points against Toronto earlier this week.

Jean-Sébastien Dea leads the Rocket in goals (26) and sits second on the team in points (51). Dea has been dominant against the Crunch this season, scoring four goals in just six games.

The Crunch enter tonight’s contest riding a 12-game home winning streak, the longest single-season mark in franchise history. During that stretch, Syracuse is averaging 4.17 goals per game, while opponents have struggled offensively, scoring 1.42 goals per game.

Max Lagace has started every home game during the streak. He is 12-0-0 with a 1.40 goals-against average and a .948 save percentage during the home winning streak; he has three shutouts at home in that time.

With a power-play goal in last night’s win over the Penguins, Gabriel Dumont hit the 30-goal mark for the first time in his career. He joins teammate Charles Hudon, who reached the 30-goal mark last Sunday at Hershey. The two represent the 18th and 19th times in franchise history a player has reached 30 goals in a season.

Groulx passed former Crunch head coach Gary Agnew, who coached the team from 2000-2006, before leaving for the Columbus Blue Jackets. Groulx is now 221-125-28-23 in his career with the Crunch.

The Crunch power play has scored at least one goal in each of their last six games, stretching back to April 16. During that time, the special teams unit has converted on eight of 25 opportunities with the extra man, a 32.0% success rate.

Syracuse now ranks fourth in the North Division with a 18.8% power-play percentage. They cashed in twice in six chances against Laval last week.

Gabriel Dumont is one of several regulars out of the lineup tonight in preparation for the postseason. It’s the first time all season the Crunch will play without their captain.

That leaves Ryan Jones as the only player on the team who will play all 76 regular season games.