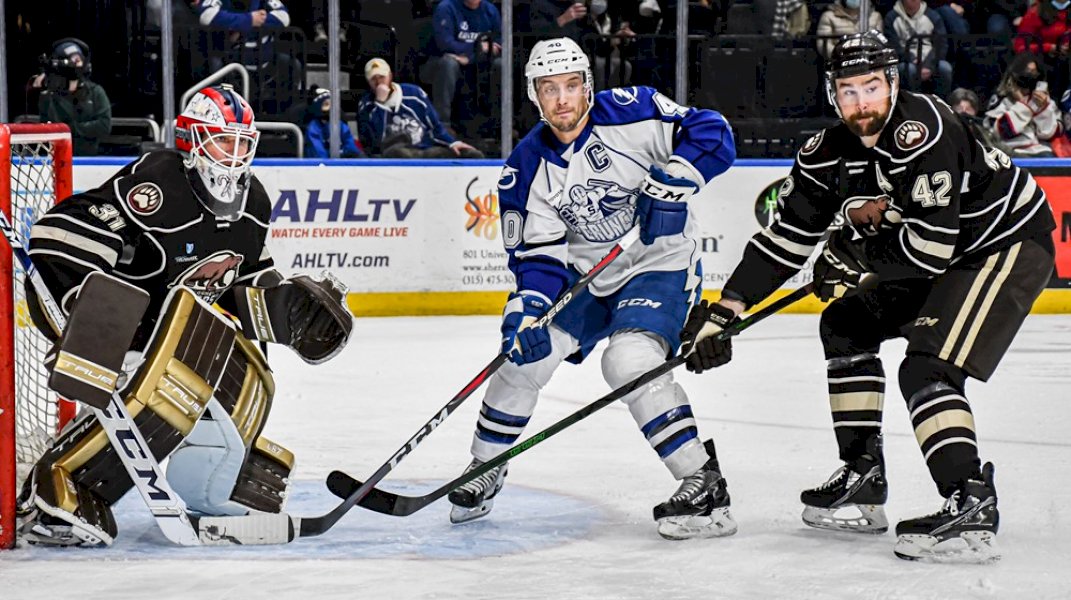 CRUNCH CLOSING IN ON PLAYOFF BERTH

The Crunch go for a three-in-three weekend sweep, and a berth in the Calder Cup Playoffs as they visit the Hershey Bears in their final regular season road game.

The Bears (34-31-6-4) have just one win in the last six games, but they’ve secured a berth in the playoffs heading into their regular season finale.

This concludes the four-game season series; the Crunch are 2-0-0-1 this season against the Bears, including an overtime win at Giant Center Oct. 27.

The Crunch earned their 10th consecutive home win and moved into second place with a 5-1 win over the Laval Rocket last night at Upstate Medical University Arena.

Syracuse overcame a one-goal deficit after Joel Teasdale opened scoring 3:07 into the game. Nick Perbix started the Crunch’s rally with the unassisted equalizer four minutes later for his second goal of the season.

The Crunch opened up a lead in the second period with a power-play goal by Gabriel Dumont 5:50 into the frame. Riley Nash doubled the lead with a strike just over five minutes left remaining in the period, making it 3-1.

Both Nash and Dumont scored again in the third period as the Crunch pulled away with a 5-1 win, capping a three-game homestand in which the Crunch outscored opponents 16-2.

The Crunch are knocking on the door of the Calder Cup Playoffs. Their magic number to secure a playoff berth stands at one entering today, giving them two scenarios to clinch their playoff spot.

Syracuse clinches a playoff berth with either a point in its game against Hershey or a Rochester loss (reg/OT/SO) at Cleveland.

The Crunch secured their third straight win and improved to 8-1-1-0 in their last 10 games last night. It catapulted the Crunch into second place in the North Division with a 0.590 points percentage; it’s the first time they’ve been in second place since the season’s opening weekend.

During their 8-1-1-0 run in the last 10 games, the Crunch have fired home 42 goals, while allowing just 22. They’ve scored at least five goals in five games. Alex Barré-Boulet has been driving the bus during the last 10 games; his 16 points (3g, 13a) lead the team and are second in the AHL in that span.

Despite stumbling down the stretch, the Bears have locked up their berth in the Atlantic Division playoffs with a 34-31-6-4 record. This is their final game of the regular season, and they’ve been shut out in three of their last four outings, including twice at Giant Center.  They are still a formidable home team, with a 21-11-2-3 record in Hershey.

Only two players have reached 40 points this season for the Bears. Mike Vecchione leads the Bears with 44 points (16g, 28a); he is one of three players tied for the team lead with his 16 tallies. Garret Pilon has 40 points (16g, 24a) to rank second on the team.

The Crunch offense has been on fire in the last 10 games, scoring 42 goals in that span to lead the team to a 8-1-1-0 record. 14 different players have scored at least one goal in that span, and 10 have scored two or more.

Riley Nash leads all Crunch players with seven goals over the 10 games. He has a pair of multi-goal outings and he has also scored a goal in both games this weekend. Charles Hudon and Anthony Richard both have six goals in the last 10 games. Gabriel Dumont has netted five in that time.

Gabriel Dumont and Charles Hudon are both on the cusp of reaching 30 goals. Hudon surged into the team’s goal scoring lead with five goals over two games following his two-goal outing Friday. He’s at a career-high 29 goals this season.

Gabriel Dumont, who has held the team’s goal lead for almost the entire season, quickly responded with a two-goal game last night to re-tie Hudon for the lead at 29 goals. Neither player has produced a 30-goal season in the AHL.

The last time the Crunch had a pair of teammates reach 30 goals was in 2018-19 with Alex Barré-Boulet and Carter Verhaeghe, who tied for the AHL lead with 34 tallies.

Tonight concludes the Crunch’s final three-in-three weekend of the season. Syracuse has had great success in three-in-threes this season, posting a 9-2-2-1 record in games played during those weekends.

Syracuse has wins in the first two games of the weekend and is looking to go 3-0 in a three-day span for the first time since March 13-15, 2015. Since that weekend, the Crunch have played 29 three-in-threes without a sweep. They have only started with consecutive wins four time and they are 0-2-1-1 in the third game on those four occasions. They last attempted a three-in-three sweep Feb. 23, 2020, but lost in overtime at Springfield.