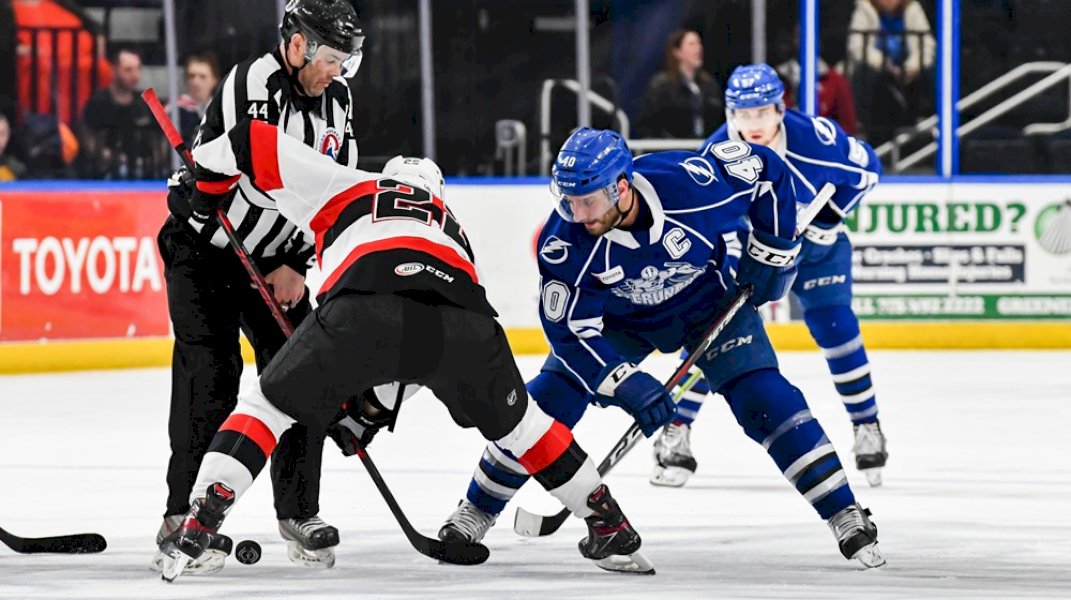 CRUNCH AND SENATORS CLASH FOR THIRD

The Crunch host the Belleville Senators with third place in the North Division at stake tonight at Upstate Medical University Arena.

The Crunch (36-25-7-2) have not played since last Saturday, when they fended off a third-place challenge by the Toronto Marlies with a 5-1 win here at home.

The Senators (38-27-4-0) have jolted up the standings with a five-game winning streak, including a comeback win against the Marlies Wednesday night.

Tonight is the eighth and final regular season matchup, with the Crunch winning four of seven so far.

Charles Hudon picked up the fourth Crunch hat trick of the season to lead them to a 5-1 win over the Toronto Marlies Saturday at Upstate Medical University Arena.

Hudon started his barrage with the lone first period goal, capitalizing on a tricky pass from Alex Barré-Boulet during an odd-man rush. He added a second five minutes into the second period, cashing in on a Crunch power play. Nick Perbix chipped in with his first pro goal to make it 3-0 before the Marlies got on the board late in the middle period.

Hudon finished the hat trick performance 10:14 into the third period to up the lead back to three. Daniel Walcott ended the scoring with a slick tip for a shorthanded goal, set up by Gabe Fortier.

Max Lagace stopped 25 shots to earn his 19th win of the season.

Nick Perbix picked up his first professional goal during last Saturday’s win over the Toronto Marlies. The rookie defenseman joined the Crunch on an amateur tryout offer in March. In six games with the team, the blue liner has picked up three points (1g, 2a).

The Senators have compiled a 38-27-4-0 record this season, good for third in the North Division. Belleville currently sits just .001% ahead of the Crunch in the standings in terms of point percentage. The Senators have won five straight games, the longest streak of the season for the team.

Andrew Agozzino has been hot lately for the Senators, logging a three-game point streak, posting five points (1g, 4a) in that time.

Viktor Lodin recently joined the Senators after his season in the Swedish Hockey League finished a few weeks ago. The 2019 fourth round pick has scored four goals in his past four games, including two Wednesday against the Marlies. The winger has racked up five points (4g, 1a) in seven games in the AHL.

The Crunch picked up a win in their lone home game of the week, extending their winning streak at Upstate Medical University Arena to eight games. This is now the second-longest home winning streak in a single season in franchise history; the franchise record is their 11-game win streak from March 14, 2008 through the end of the 2007-08 season.

This is the longest active home winning streak in the AHL, and it is tied for the second longest in the league this season. Only Laval’s nine game streak is longer. The Crunch finish the season with five of their final six games at home. They are 17-4-1-1 at home since January; three of the four regulation losses were against Utica.

Charles Hudon picked up his second career hat trick during last Saturday’s win over the Toronto Marlies. The three-goal night pushed him up into a tie for first with Gabriel Dumont with 27 goals this season.

With six games remaining, both have a chance to hit the 30-goal plateau for the first time in their careers. Dumont has already set a career high in goals this season, while Hudon is just one goal away from tying the career high he set in 2015-16 with the St. John’s IceCaps.

If Hudon and Dumont hit 30 goals this season, it would be just the third time a pair of Crunch players both hit the 30-goal mark in a season since the Lightning affiliation started in 2012-13. The last pair of Crunch players to achieve this feat were Carter Verhaeghe (34g, 48a) and Alex Barré-Boulet (34g, 34a) in the 2018-19 season. That duo shared the Willie Marshall Award as the AHL’s top goal scorers.

Anytime the Senators have shown up on the other side of the ice, Alex Barré-Boulet has taken full advantage. In six games against Belleville, the Quebec native has posted nine points (3g, 6a), including a multi-goal performance in the last matchup.

The Crunch’s leading point-getter comes into the night with 58 points (16g, 42a), including a three-assist game in Syracuse’s win last Saturday against the Toronto Marlies. Barré-Boulet has six games remaining to reach his career-high of 68 points he achieved in the 2018-19 season.

The Crunch’s special teams units both sit sixth in the North Division this season. The power play has converted on 17.5% of its opportunities, while the penalty kill has turned aside 79.1% of opponents chances with the extra man.

The Senators have been slightly better on the powerplay, scoring a goal on 18.5% of their chances, but the team’s penalty kill has been dominant. Through 69 games, Belleville’s penalty killers lead the North Division with an 82.9% success rate, a mark that places them third in the Eastern Conference.