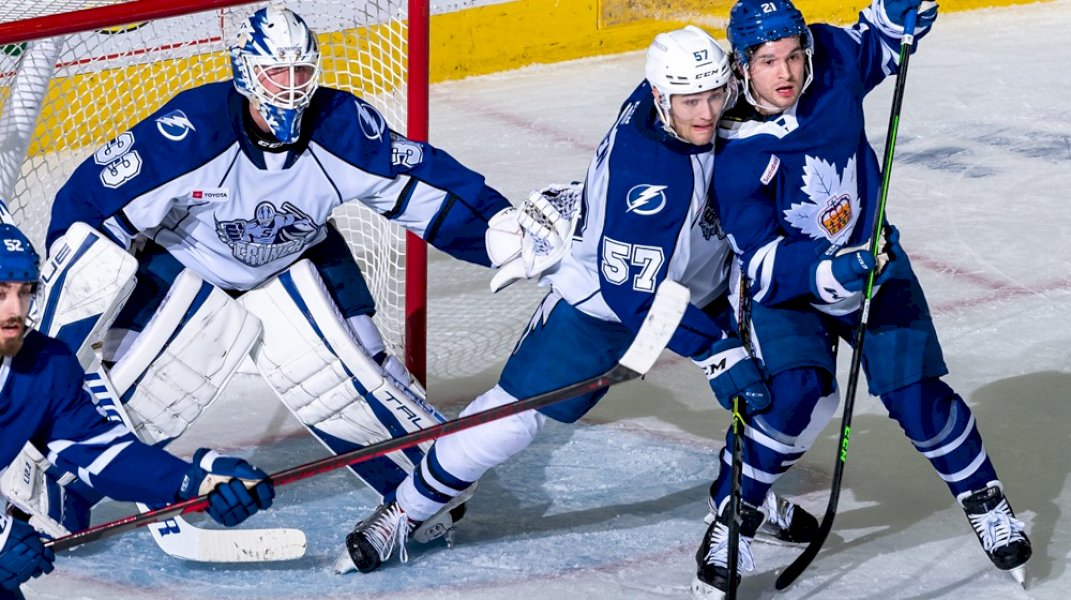 CRUNCH JOCKEY FOR POSITION AGAINST MARLIES

The Marlies pulled within 0.003% of the Crunch in the North Division following a 4-1 win last night against Hartford.

The Crunch lost to the Utica Comets, 5-1, last night at the Adirondack Bank Center.

The Crunch came out firing, with seven shots in the first three minutes, but they were unable to get one past Akira Schmid. Nikita Okhotiuk then scored from the left wall at 8:09 to give Utica a 1-0 lead. Reilly Walsh doubled the lead on a partial odd-man chance in the Crunch zone, banging in a pass from the low slot 5:01 into the second period.

Syracuse clawed back within one later in the period on a shorthanded goal from Anthony Richard. The Crunch had several power-play chances come up empty in the third period with a chance to tie the game, and then Tyler Wotherspoon netted a shorthanded goal for the Comets for a 3-1 lead. Utica scored two more late goals for the 5-1 win, leaving the Crunch with a 3-10-1-0 head-to-head record this season.

The Crunch come into play tonight third in the North Division with a 35-25-7-2 record. Syracuse has picked up points in seven of their last ten games, posting a 6-3-1-0 record in that time.

Anthony Richard scored the lone goal for the Crunch last night amid a loss to the Comets. The forward has been hot of late, picking up 12 points (6g, 6a) in his past 10 games. Before being traded to the Crunch, Richard owned a .39 points per game rate; while with Syracuse, the Quebec native has nearly doubled that mark to .72, adding 24 points (9g, 15a) in 33 games.

The Marlies sit fourth in the North Division this season with a 35-26-3-1 record. Toronto took down the Hartford Wolf Pack at home last night, giving them back-to-back wins; the Marlies haven’t won three consecutive games since a five-game win streak Jan. 24-Feb. 16.

Nick Robertson has been filling up the net for the Marlies recently. The Maple Leafs prospect is currently on a five-game point streak, picking up five points (4g, 1a) in that time. The California native has one goal against the Crunch this season and 22 points (12g, 10a) in 22 games overall.

The Marlies have featured a rotating carousel of goalies this season, with eight different netminders getting into game action. Michael Hutchison has been the workhorse of late, appearing in four straight games. In 21 games, Hutchison is 9-6-3 with a 3.03 goals against average and a .906 save percentage. He’s allowed just one goal in each of his last two starts.

The Crunch come into tonight’s matchup with the Marlies riding a seven-game home win streak. Syracuse has not lost a game at Upstate Medical University Arena since March 12 against Toronto, a 3-2 overtime loss.

Ben Groulx‘s squad has not lost in regulation on home ice since March 5 when Syracuse fell to Utica. During their win streak, the Crunch are averaging 4.0 goals per game, and holding opponents to a mere 1.9 goals per contest.

The Crunch close the season with six of their final seven games on home ice. Syracuse is 19-10-1-2 at home this season, leaving the Crunch one win from 20 for the first time since 2018-19.

In April, the Crunch have earned points in all but two of the eight games they have played (5-2-1-0). Last night’s loss to Utica was just the second regulation loss the Crunch have suffered this month, and both losses are against the Comets.

Syracuse has earned points in six of its last seven games, with a record of 5-1-1-0 during that span.

Max Lagace is expected to start in net tonight for the Crunch. The Longueuil, Quebec native has been red hot for Syracuse, taking home a win in each of his last three starts. That includes last Saturday’s 48-save shutout against the Penguins.

RACE HEATING UP IN THE NORTH

With just seven games remaining, the race for the Calder Cup Playoffs has the entire North Division wrapped up in a tight battle for the five playoff spots. Entering Saturday night, the Crunch hold a slight lead over the Marlies for third in the division.

The winner of tonight’s game between Syracuse and Toronto will take hold of third place, with the loser dropping as low as fifth depending on other scores around the division.

Tonight is the final of four head-to-head matches this season between Syracuse and Toronto. The Crunch have earned points in all three games (1-0-1-1) this season, but the Marlies have earned wins in the last two (March 12 and April 16). Syracuse’s lone win came in Toronto Dec. 15.

Alex Barré-Boulet leads healthy Crunch skaters in scoring with three assists in three games. Joey Anderson paces the Marlies with three points (1g, 2a) in two games against the Crunch.