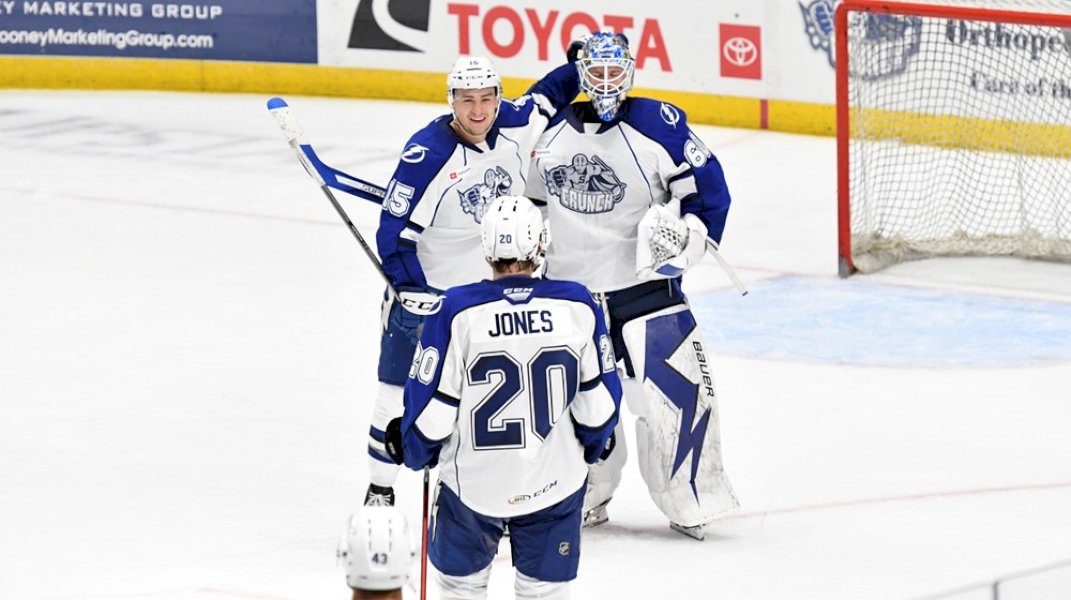 The Crunch play the tail end of a three games in four nights week as they visit the Lehigh Valley Phantoms at PPL Center.

The Crunch (3-2-1-0) have earned two wins-both past regulation-in the first two games this week. Last night they won, 3-2, in a shootout at home against the Cleveland Monsters.

Gage Goncalves scored once in regulation and the lone tally in a shootout as the Crunch outlasted the Cleveland Monsters, 3-2, last night at Upstate Medical University Arena.

Goncalves opened the scoring for the Crunch with his third goal of the season. He potted a rebound near the crease with just over a minute to go in the first period to make it 1-0. That score held into the third period, despite 16 second-period shots from the Crunch.

The Monsters tied the game at one on Kevin Stenlund’s deflection at 1:45. One minute later Antoine Morand dished a pass to Gabe Fortier rushing up ice for a one-timer to put the Crunch back ahead 2-1. Cleveland responded with a Justin Danforth goal that came on a fortuitus bounce after a strong defensive play by the Crunch.

Goaltender Hugo Alnefelt denied Danforth on a breakaway in the final 20 seconds of regulation to send the game into overtime and eventually a shootout. He denied three attempts and Goncalves connected in the third round to give the Crunch the win.

The Crunch have earned back-to-back wins for the first time this season and stand at 3-2-1-0 entering the weekend finale. The Crunch have ensured themselves of at least a .500 record in October for the third time in five seasons under head coach Ben Groulx; they also posted .500 or better records in October 2016 and October 2019).

Rookie Gage Goncalves netted his third goal of the season last night and he ranks second on the team in goal scoring behind Jimmy Huntington (5). Goncalves has been responsible for two game-winners, one officially in regulation and one unofficially in last night’s shootout. He has also been responsible for the game’s first goal twice. It marks the second straight year a Crunch rookie has tallied three goals in the team’s first six games of the season; last year Gabe Fortier netted three over the team’s first three games.

The Crunch’s rookie goaltenders are settling in and have won both games this week. Amir Miftakhov earned a win in his AHL debut Wednesday at Hershey, stopping 29-of-31 (.935 save percentage) for his first AHL win. Hugo Alnefelt turned aside 26-of-28 last night and 54-of-58 (.931 save percentage) in his last two appearances.

The Lehigh Valley Phantoms are the lone winless team remaining in the AHL. Off to an 0-5-1-0 start, the Phantoms are last in the Atlantic Division.

The Phantoms have been limited by their struggles offensively, with just eight goals in six games that has them at the bottom of the league. At 1.33 goals per game, Lehigh Valley is one of two teams (Providence, 1.83) scoring fewer than two goals per game; both teams have new head coaches this season.

No player has more than two points thus far for the Phantoms. Among the group of seven players with two points is Gerry Mayhew, who led the AHL in goals (39) and finished third in points (61) during the shortened 2019-20 season with Iowa. He had 18 points in 19 games last year with the Wild.

Samuel Ersson and Felix Sandstrom have split duty in the Phantoms crease. Both goalies have an identical 2.74 goals-against average. Sandstrom holds a .909 save percentage while Ersson owns a .892 save percentage.

Second-year pro Gabe Fortier is off to a strong start for the Crunch. He netted his first goal of the season in last night’s win over Cleveland, giving him four points (1g, 3a) in the team’s first six games. As a rookie last year, Fortier finished with 10 points (6g, 4a) in 30 games for the Crunch.

Crunch head coach Ben Groulx called Fortier an example on the ice for the rest of the team to follow, garnering the 21-year-old recognition as an alternate captain on the team. He served as captain for both Baie-Comeau and Moncton in the QMJHL prior to beginning his pro career.

Tonight marks the first of two head-to-head matches with the Lehigh Valley Phantoms. They will conclude their two-game series with a rematch in Syracuse Nov. 26.

The clubs last faced off during the 2019-20 season, playing twice in just over a month. The Phantoms won the first contest, 5-4, at PPL Center Jan. 15 before the Crunch responded with a 2-1 win at Upstate Medical University Arena Feb. 22. The Crunch hold a 4-2-0-0 record against the Phantoms over the last five years, but they are just 1-2-0-0 at PPL Center.

The Crunch power play came up empty in three chances last night as the team failed to score a power-play goal for the second time in six games this season. They are operating at 20.0% (5-for-25) which is tied for 13th in the AHL.

The Phantoms struggles offensively have been mirrored with their power play as they rank 30th in the AHL at 6.7% in six games. They have scored just two power-play goals (2-for-30) in total and they are 0-for-9 in two home games.

Syracuse’s penalty kill has been stellar with another perfect performance last night. The Crunch’s four successful kills gives them a 13-for-13 run in the last five games. They have allowed just one power-play goal all season and that came in a 5-on-3 disadvantage in the season opener at Cleveland. The Crunch rank second overall in the league at 95.2%.

Lehigh Valley is in the middle of the pack on the penalty kill. The Phantoms have allowed three power-play goals this season in 19 chances (84.2%). They are a perfect 7-for-7 in two home games.