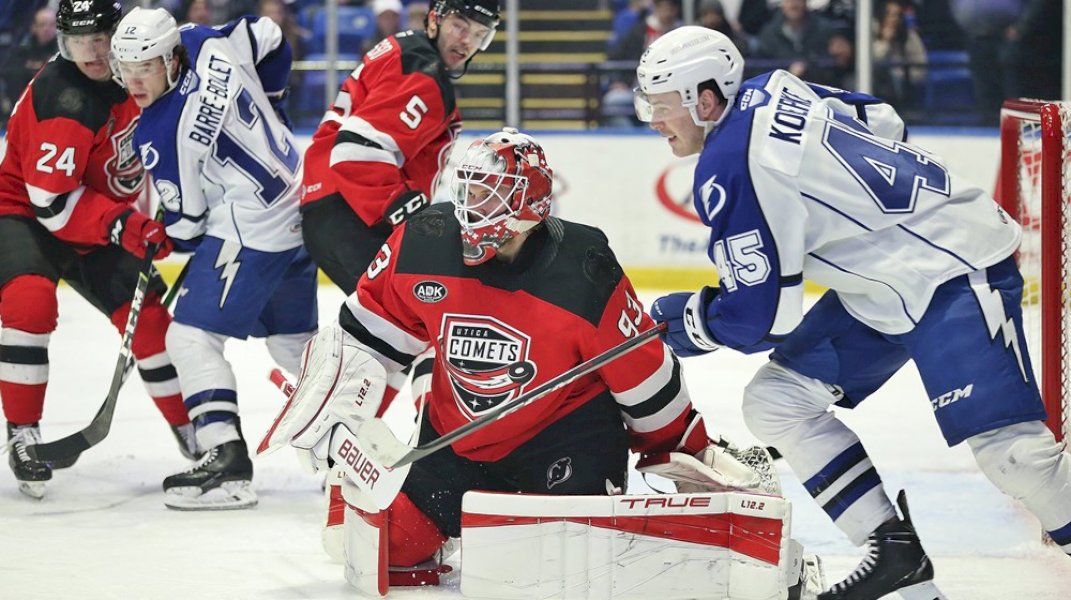 The Crunch play the final game of the regular season series with the Utica Comets tonight at the Adirondack Bank Center.

The Crunch (35-24-7-2) earned their third straight win with a 4-2 comeback triumph over the Springfield Thunderbirds Wednesday at the MassMutual Center.

Utica is on a four-game losing streak (0-3-1-0) with the Comets last win coming against the Crunch two weeks ago.

For the second time in less than a week, the Crunch scored four unanswered goals to rally from a two-goal deficit against the Springfield Thunderbirds, winning 4-2 at the MassMutual Center Wednesday.

The T-Birds, one of the top home teams in the AHL, scored once in the first and again 8:09 into the second period to open a 2-0 lead. Like Friday in Syracuse, the Crunch immediately started a comeback with a goal about a minute later. Gemel Smith scored on a wraparound to make it 2-1.

Later in the period, Riley Nash and Cole Koepke connected on a give-and-go, with Nash burying a return pass into the open net to tie the score at 15:17. Less than two minutes later, Gabriel Dumont jammed home a puck near the post to put the Crunch ahead, 3-2, late in the second period.

The Crunch held the Thunderbirds to just six third period shots and Dumont iced the game with an empty-net goal to cap a three-point effort and lead the Crunch to the 4-2 win.

The Crunch (35-24-7-2) pushed their point streak to six games (5-0-1-0), which is tied for their longest of the season (March 9-18). It is tied with Laval for the second-longest active streak in the league, and the Crunch trail the Rocket in the North Division. Syracuse is in third with a 0.581 points percentage.

Their two-goal win on Wednesday gives the Crunch a positive goal differential (213-212). They last broke even in that statistic Nov. 10, when they were at both 31 goals for and against. During this six-game point streak, the Crunch have outscored opponents 25-15.

Gemel Smith sparked the Crunch’s comeback with his second goal in as many games since returning to the Crunch lineup following an injury. He missed 17 games due to an injury suffered March 4. He has six points (3g, 3a) in 10 games between Grand Rapids and Syracuse this season.

The Comets are in a slump that has seen them lose four consecutive games (0-3-1-0), including three straight against teams competing for the playoffs in the North Division (Belleville and Laval). Utica’s last win came against the Crunch two weeks ago at the Adirondack Bank Center and the recent stretch has dropped Utica to fourth overall in the AHL.

Despite that, the Comets (39-18-7-1) are still the only team that has clinched a playoff berth in the North Division. Their magic number to clinch their first division title since 2014-15 is at seven.

Utica is without their top two point producers with Fabian Zetterlund (52 points) and A.J. Greer (50 points) on recall to New Jersey. Chase De Leo also has 50 points, and he paces active Comets. The Comets are one of five AHL teams with three 50-point scorers (Chicago, Colorado, Milwaukee and Rochester); the Crunch need one points from Charles Hudon to point that group as well.

Tonight is the Crunch’s penultimate road game of the regular season, and it’s their last of seven trips to Utica. After tonight, six of the Crunch’s final seven regular season games will be played at Upstate Medical University Arena. Their final road game is next Sunday, April 24 at Hershey.

Syracuse has collected points in its last four road games (3-0-1-0). The Crunch are 16-14-6-0 in road games this season, which ensures at least a 0.500 road record for the seventh time in the last eight seasons.

PUSHING TOWARD THE PLAYOFFS

The Comets have stood in the way as the Crunch’s bugaboo this season. Syracuse is 3-9-1-0 this season in 13 previous matches with the Comets. The Crunch are 32-15-6-2 against the rest of the AHL, which is good for a 0.655 points percentage. The Crunch have only suffered 10 regulation losses against one opponent in a single season once, when they went 1-10-1 against Rochester in 1998-99.

CAN’T COUNT OUT THE CRUNCH

Wednesday was the Crunch’s seventh win this season when trailing by at least two goals. It was their second such victory against the T-Birds within a week, after they overcame a 3-1 deficit last Friday. Four of the Crunch’s five wins in April have come after the team has trailed by at least one during the game.