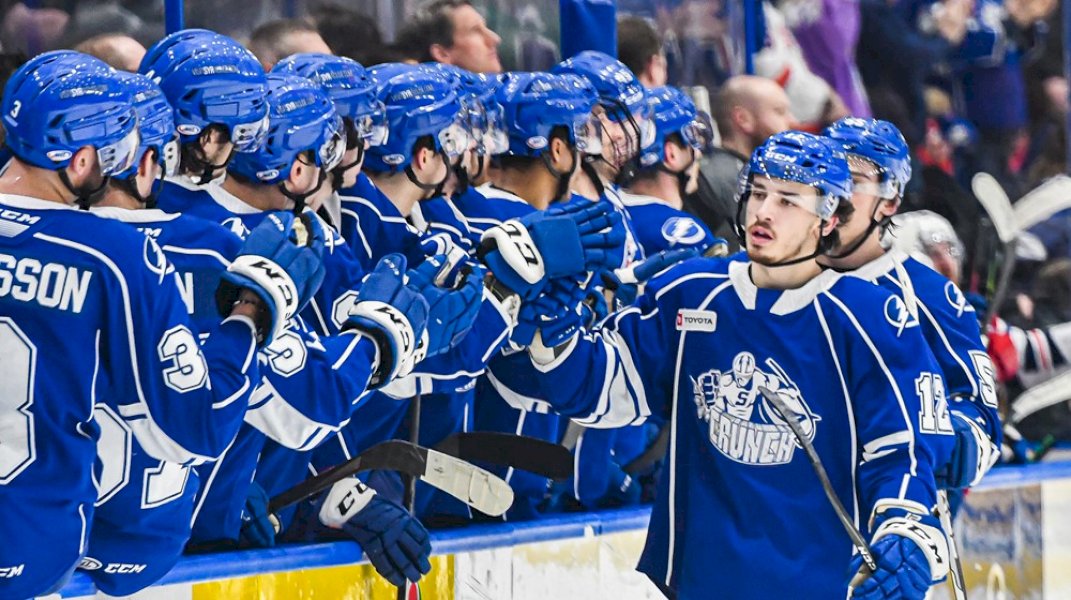 The Crunch are back home following their four-game road trip and they take on the Springfield Thunderbirds for the first time this season.

Springfield (37-20-5-2) has won three straight games and five of their last six to take over the top spot in the Atlantic Division.

The Crunch rallied from a late deficit to earn a point, but fell to the Toronto Marlies, 4-3, in overtime Wednesday at Coca-Cola Coliseum.

Syracuse did take a 2-0 lead with a pair of early goals in the first two periods. Cole Koepke scored on a deflection just 14 seconds into the game and Darren Raddysh blasted a one-timer 2:05 into the middle frame to give the Crunch their lead.

Toronto rattled off three consecutive goals in a nine-minute span in the second period to grab a 3-2 advantage. Syracuse controlled play the rest of the way, out shooting the Marlies, 11-1, in the third period and tying the game on a Riley Nash deflection with 1:35 on the clock, sending the game to overtime.

Despite a flurry of Crunch chances in the extra session, the Marlies won the game on a 2-on-0 rush at 3:41 of overtime.

The Crunch come into play tonight with a 32-24-7-2 record. Syracuse sits fourth in the North Division with a 0.562 points percentage. Tonight is the first of back-to-back home games for the Crunch, who finish the season with eight of their final 11 games at Upstate Medical University Arena.

It also marks the Crunch’s return to Syracuse after a four-game road trip that started in Utica and ended in Toronto. The Crunch finished the four-game swing with a 2-1-1-0 record and are currently on a three-game point streak (2-0-1-0).

Alex Barré-Boulet was electric on the trip, picking up nine points (4g, 5a) in four games. The forward logged three point games on back-to-back nights against the Hartford Wolf Pack and Providence Bruins. With two assists against the Marlies, Barré-Boulet extended his point-streak to a season-high five games, including three straight multi-point outings. He has nine multi-point performances in the last 18 games since March 2, posting 27 points (13g, 14a) in that span, to lead the entire AHL.

The Thunderbirds currently lead the Atlantic Division with a 37-20-5-2 record this season. Springfield sits just behind the Comets for second in the Eastern conference. This is the Thunderbirds first time playing at Upstate Medical University Arena since Jan. 17, 2020; the Crunch lost that game 4-1.

Two key players have led the Thunderbirds’ offensive attack this season. Sam Anas and Matthew Peca sit first and second in the team’s scoring lead, separated by just one point. Anas leads the team with 55 points (19g, 36a), while Peca leads in goals scored (20).

Cole Koepke scored the Crunch’s opening goal on Wednesday after just 14 seconds of game action. The first period marker was the rookie’s 20th goal of the season; Koepke is just the fourth rookie since the start of the Lightning affiliation in 2012-13 to score 20 goals. Twelve rookies have done it in franchise history. Alex Barré-Boulet was the last to reach that mark, adding a franchise-record 34 goals as a rookie in 74 games during the 2018-19 season.

Four Crunch players are currently on scoring streaks of at least three games. Alex Barré-Boulet is joined by Riley Nash (3g, 5a) and Charles Hudon (2g, 6a), who also have points in five straight games. This is the second five-game point streak of the season for Hudon.

Gage Goncalves is also on a three-game point streak, picking up one assist in each of those games.

NICE TO “SKI” YOU

Tonight marks the return to Syracuse for former two-time Crunch captain Luke Witkowski. The veteran defenseman began his career with the Crunch at the end of the 2012-13 season and he saw action through the 2016-17 season, when he served as captain. After a two-year stint with the Detroit Red Wings, the Michigan native returned to the Lightning organization in the 2019-20 season, and was again named captain of the Crunch from 2019 to 2021.

NEW FACES ON THE BLUELINE

Two defensemen made their Crunch and pro debuts over the four-game road trip. Declan Carlile debuted against the Utica Comets last week and he has picked up two points (1g, 1a) since joining the team. Carlile netted his first pro goal Saturday at Hartford.

Nick Perbix joined the Crunch earlier this week and skated in his first pro game Wednesday against Toronto. Perbix just completed four seasons at St. Cloud State and signed a one-year, entry-level contract with the Lightning for the 2022-23 season. The Lightning draft pick represented the United States at the 2022 Beijing Olympics.