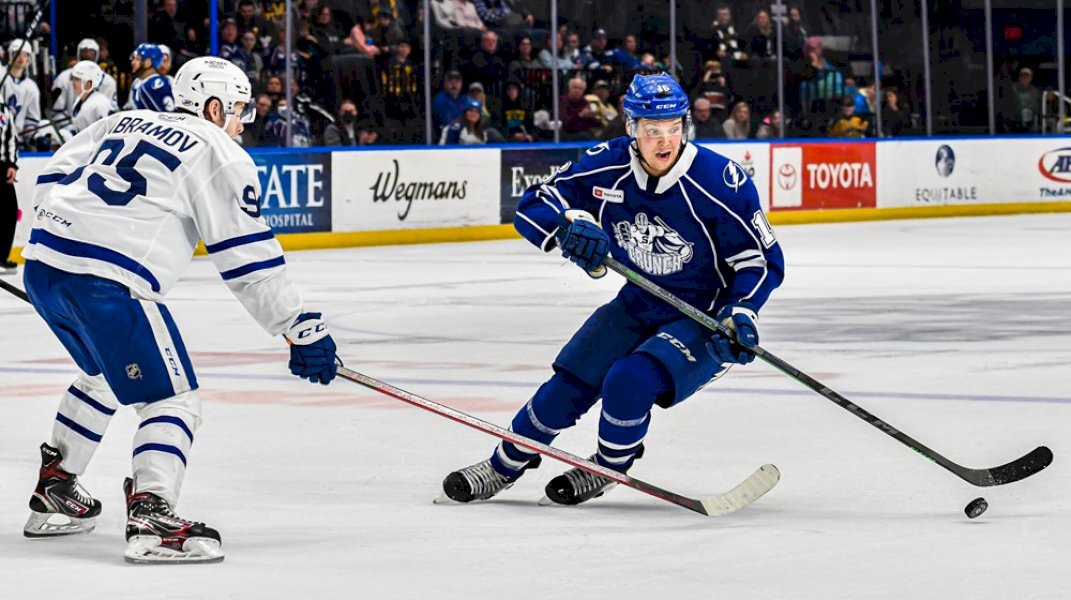 The Crunch play their fourth consecutive road game tonight as they visit the Toronto Marlies at Coca-Cola Coliseum.

The Crunch (32-24-6-2) are 2-1-0-0 so far during the road trip, earning consecutive wins over Hartford and Providence to finish their three-in-three weekend.

Toronto (32-25-3-1) returns home following their own four-game road trip during which they went 2-2-0-0 with two wins at Abbotsford and two losses at Manitoba.

This is the third of four head-to-head meetings this season; the Crunch have earned a point in the first two (1-0-0-1), including a win in Toronto Dec. 15.

Alex Barré-Boulet scored twice and the Crunch notched the final four tallies en route to a 4-1 win over the Providence Bruins at the Dunkin’ Donuts Center Sunday.

The Bruins scored first with a power-play goal early in the second period. That was Providence’s only goal on 39 shots against their former goaltender Max Lagace, who earned his 15th win.

Barré-Boulet provided all the offense the Crunch needed with two goals in the second period. He scored on a rebound at 9:53 to tie the game, then found a loose puck and zipped home his second of the game to give the Crunch the lead for good at 18:51.

Gabriel Dumont and Anthony Richard added empty-net goals in the third period as the Crunch went on to win, 4-1, and improve to 7-2-2-1 in games played during three-in-three weekends this season.

Max Lagace made a season-high 38 saves in Sunday’s win against Providence; it was his first appearance against the Bruins since spending the 2019-20 season with that organization. Lagace is 9-2-1 in his last 12 decisions, posting a 1.84 goals-against average and a .926 save percentage in that time. He is 15-9-1 with a 2.64 goals-against average this season.

The Marlies split four games during their four-game road trip to Abbotsford and Manitoba. After taking two wins against the Canucks, Toronto dropped both games against the Moose and slipped to fourth in the North Division at 32-25-3-1.

The Marlies open a four-game homestand tonight; they also take on Grand Rapids and Hartford during this stretch before they finish the season with six of their last seven on the road. Out of Toronto’s final 11 games, two are against the Crunch and three are against both Belleville and Laval, three of the teams competing for a playoff spot in the North Division.

Goalie Michael Hutchinson has returned following an emergency recall to the Maple Leafs. In 17 games for the Marlies, Hutchinson is 6-6-3 with a 3.11 goals-against average and a .905 save percentage.

Alex Barré-Boulet had a dominant week for the Crunch, leading the team with seven points (4g, 3a) in three games. He scored a goal in all three games, including a two-goal performance in Sunday’s weekend finale at Providence. His third multi-goal outing of the season gives Barré-Boulet seven goals in the last seven games and helped him crest the 50-point mark for the third time in his career.

GETTING RID OF THE MONKEY

Crunch captain Gabriel Dumont got the monkey off his back and snapped a 17-game goal drought Sunday against Providence. His insurance goal capped a surge of four points over the final two games of the weekend, pushing the veteran past the 50-point mark for the first time in his career.

He had three assists Saturday for his 10th multi-point game of the season and he leads the Crunch with 53 points (25g, 28a) in 63 games.

THE DAD LIFE FOR RICHARD

After celebrating the birth of his son, Roman, Anthony Richard returned to the Crunch lineup for the final two games of the weekend and scored three goals. He produced his first two-goal game with the Crunch on Saturday, scoring a shorthanded goal and an empty-net goal in the third period. Riding a three-game goal streak, Richard has 19 points (7g, 12a) in 28 games since joining the Crunch in February.

Richard is the third Crunch player to welcome a baby into the family this season, along with Alex Barré-Boulet and Fredrik Claesson.

Rookie defenseman Nick Perbix signed an amateur tryout with the Crunch earlier this week after signing a one-year, entry-level contract with the Tampa Bay Lightning for the 2022-23 season.

A sixth round pick by the Lightning in 2017, Perbix represented the United States at the 2022 Olympics in Beijing, where he contributed an assist in four games for Team USA.