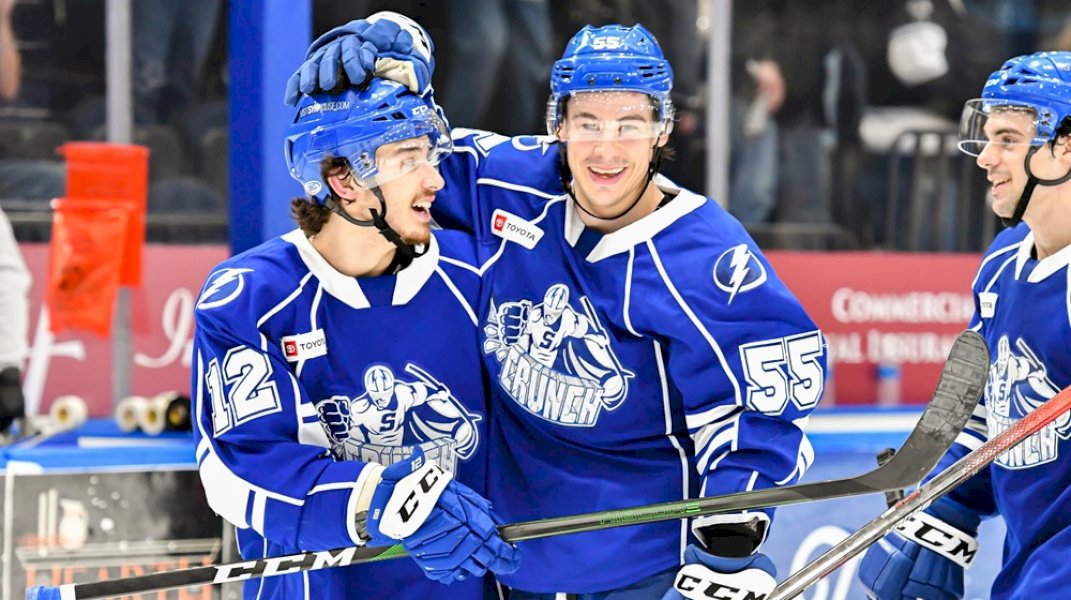 The Crunch finish off their three-in-three weekend with a match against the Providence Bruins at the Dunkin’ Donuts Center. It’s the Crunch’s third game in three days in three different road cities.

Providence (30-18-4-6) had the night off last night after beginning the weekend with a 1-0 overtime loss against Springfield.

The Crunch and Bruins are playing the first game of their two-game regular season schedule; they meet in Syracuse on April 27 in a game that was originally scheduled for December.

The Crunch scored a season-high eight goals to race past the Hartford Wolf Pack, 8-5, last night at the XL Center.

Alex Barré-Boulet opened the track meet 1:50 into the game by scoring on a rebound. Hartford netted the next two goals before head coach Ben Groulx burned his timeout to settle down the team. They responded with the next two goals by Simon Ryfors and Declan Carlile to take a 3-2 lead, which they would not relinquish.

Cole Koepke gave the Crunch a two-goal lead early in the second, but the teams traded goals the rest of the period. Ryfors netted his second of the game and Sean Day capped the second period scoring to give the Crunch a 6-4 lead heading into the final frame.

Anthony Richard scored the only two Crunch goals in the third period and Syracuse grabbed the 8-5 win.

With their win last night, the Crunch have now won their last five games following a loss (regulation, OTL or SOL). That consistency has the Crunch positioned in fifth place in the North Division with a 0.556 points percentage. It also snapped a three-game road losing streak, and the Crunch are back at 0.500 (14-14-5-0) on the road this season.

Simon Ryfors has the recent hot hand for the Crunch. He has goals in back-to-back games for the third time this season and he enters on the heels of his first multi-goal game in the AHL last night. The Swede has surged since mid-March, collecting 11 points (5g, 6a) in nine games.

Rookie Declan Carlile, who earned an assist in his pro debut on Friday, scored his first pro goal last night. The 21-year-old is the sixth player on the Crunch to score his first AHL goal this season.

The Bruins were idle last night after suffering a 1-0 overtime loss to Springfield Friday night. They are in the race for the top spot in the Atlantic Division, but they dropped to third place due to the results of other games last night. At 30-18-4-6, Providence holds a 0.603 points percentage and is narrowly behind Springfield and Charlotte.

The Bruins have struggled recently, earning just two wins in the last 10 games (2-4-1-3). They scored just 15 goals in that 10-game span. However, they remain a tough team to score against, leading the Eastern Conference by allowing only 2.66 goals per game.

Cameron Hughes leads the Bruins offensively with 44 points (14g, 30a), including 18 power-play points and four shorthanded goals. Troy Grosenick has been a rock in goal, playing to a 14-4-4 record with a 1.98 goals-against average and a .931 save percentage.

ANOTHER DAY, ANOTHER CITY

So far in their first three three-game weekends, the Crunch have collected at least a point in two of three games in each weekend. In games played during a three-in-three weekend, the Crunch are 6-2-2-1.

This weekend is the first time the Crunch have played three games in three days in three different road cities since Dec. 16-18, 2016; that trip also featured stops in Hartford and Providence.

Crunch forward Daniel Walcott is on the cusp of playing his 300th AHL game. The veteran winger suited up for the 299th time last night against the team he debuted with back in the 2014-15 season. Between Syracuse and Hartford, the converted defenseman has skated in 299 games and logged 76 points (24g, 52a).

Walcott is in line to become just the fourth Crunch player in franchise history to play in 300 as a member of the Crunch. Brad Moran holds the franchise record for games played (334), with Jeremy Reich (315) and Mark Wotton (310) the only other two to appear in at least 300 games for the Crunch.

Like most Atlantic Division teams, the Bruins have struggled in head-to-head games against North Division foes. Providence is 3-7-1-0 against teams from the North Division this season.

It was Richard’s first game since the birth of his first child, a boy named Roman. Richard missed Friday’s game in Utica and traveled separately from the team to Hartford, but he arrived in time to notch his first two-goal game with the Crunch, giving him four points in the last two games.