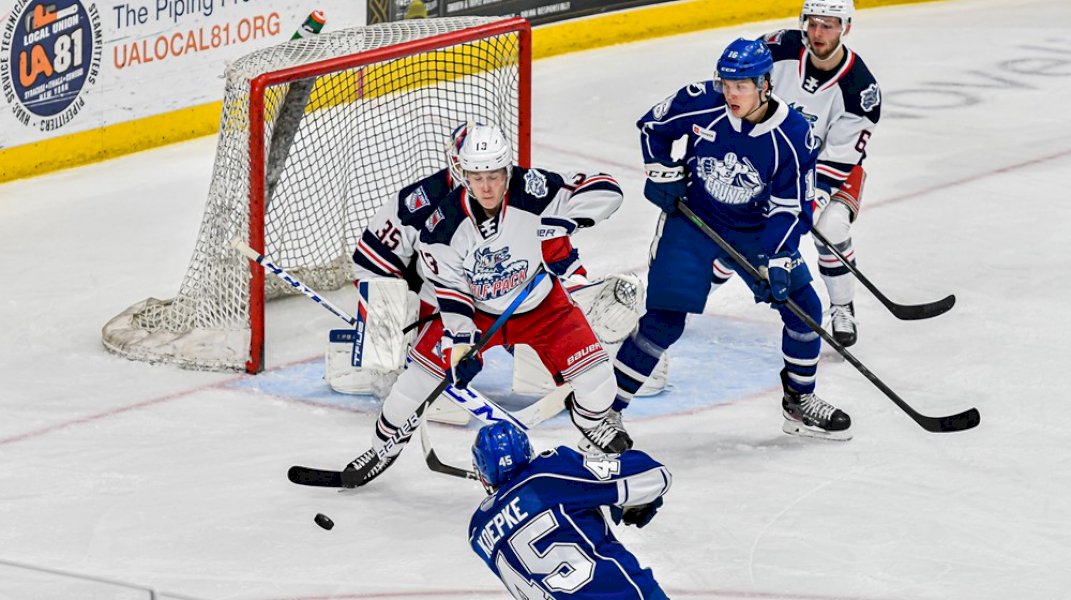 CRUNCH LOOK TO REBOUND IN HARTFORD

The Crunch shuttle to Hartford for the middle game of their three-in-three weekend and face off against the Wolf Pack at the XL Center.

Hartford didn’t do the Crunch any favors in the North Division playoff race, with the Wolf Pack (29-25-5-2) coming up short in a 4-1 home loss to Belleville.

Tonight concludes their two-game series after the Crunch took the first match, 4-2, just over two weeks ago in Syracuse.

The Crunch’s late rally came up short in a 5-3 road loss against the Utica Comets at the Adirondack Bank Center last night.

The Crunch controlled play most of the night, limiting the Comets to 15 total shots in the game, but they found themselves down 3-0 in the opening minute of the third period. The Comets received a shorthanded goal in the first period and then a power-play goal in the second and third to take that 3-0 lead.

With the Crunch aggressively looking for a comeback, Utica added an empty-net goal with just under nine minutes to go in the third. Seemingly out of it with less than five minutes remaining, the Crunch suddenly rattled off three goals in two minutes to make it a 4-3 game. The goals were scored by Gabe Fortier, Simon Ryfors and Alex Barré-Boulet.

The Comets survived by adding a second empty-net goal to make it a 5-3 final.

The Crunch’s loss last night set them back to fifth place in the North Division with a 30-24-6-2 record. Belleville’s win over Hartford pushed the Senators into fourth place, while Rochester’s loss kept Syracuse in a playoff position.

The Crunch are in that position in spite of their struggles against the Comets. They are now 3-9-1-0 in 13 games versus the Comets this season; their 0.269 points percentage pales in comparison to their 0.622 (27-15-5-2) mark against the rest of the league.

Syracuse has been able to climb the standings by avoiding lengthy slumps. The team has lost back-to-back games just once since the beginning of March (March 4-5 vs. Utica). They have won their last four games following a loss (regulation, OTL or SOL).

The Wolf Pack, who at times have led the Atlantic Division this season, have gone into a tailspin which leaves their grasp on a playoff spot in a precarious position. With three straight losses and just two wins in the last 11 games (2-9-0-0), the Wolf Pack are now in fifth place with a 0.533 points percentage and only a slim advantage over the surging Islanders and Penguins.

Hartford has allowed at least four goals in seven of the 11 games during this funk. During their three-game losing streak, the Pack are being outscored 16-5.

Former Crunch forward Anthony Greco continues to shine for Hartford. He paces the team with 50 points (17g, 33a) in 55 games, marking the second time in his career he’s reached the 50-point mark (also 2018-19 with Springfield).

Newcomer Nick Merkley, acquired at the trade deadline by the New York Rangers, is officially second on the team in scoring with 39 points this season. After notching 36 in 43 games for the San Jose Barracuda, Merkley has three in his first six games with Hartford.

ANOTHER DAY, ANOTHER CITY

So far in their first three three-game weekends, the Crunch have collected at least a point in two of three games in each weekend. In fact, last night was just their second regulation loss in a game that is part of a three-in-three weekend (5-2-2-1).

This weekend is the first time the Crunch have played three games in three days in three different road cities since Dec. 16-18, 2016; that trip also featured stops in Hartford and Providence.

Defenseman Declan Carlile made his professional debut last night for the Crunch and collected an assist for his first pro point. The 21-year-old signed an entry-level contract with the Tampa Bay Lightning March 16 at the conclusion of his season at Merrimack College. He also signed an amateur tryout with the Crunch for the conclusion of the season.

The Hartland, Michigan native spent three seasons at Merrimack, where he totaled 83 games from 2019 to 2022. He collected 56 points in that span; he ranked fifth on the team this season with 24 points.

Carlile is 46th player, including goaltenders, to play in a game for the Crunch this season.

Eight of the Crunch’s final 14 games, including tonight against Hartford, are scheduled against teams from the Atlantic Division. The Crunch are 1-0-0-0 against the Wolf Pack this season and 8-4-1-1 against the Atlantic Division this season. They have games remaining against Hartford (1), Providence (2), Springfield (2), Wilkes-Barre/Scranton (2) and Hershey.

The Wolf Pack are 6-7-3-1 this season against North Division teams after their loss to Belleville last night.

THE RACE IS ON

The North Division playoff race continues to tighten as the final month of the season begins.

COMETS DOWN CRUNCH FOR 10TH TIME THIS SEASON