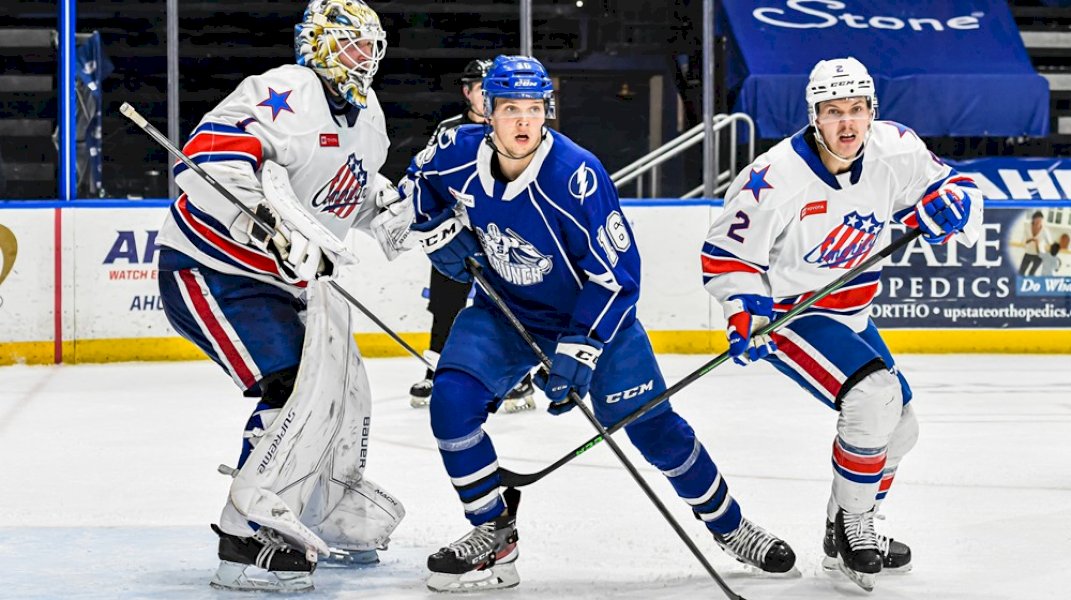 The Amerks (30-23-4-3) have earned points in their last five games, but fell in a shootout last night at home to the Toronto Marlies.

Syracuse has won seven of the last nine games in the head-to-head series and holds a 7-3-1-0 record against the Amerks ahead of their final match this season.

The Crunch were limited to 20 shots and lost to the Utica Comets, 3-1, last night.

The teams combined for 10 total shots in the first period, but the game was scoreless heading into the second.

Gage Goncalves put the Crunch on the board with his 15th goal of the season 51 seconds into the period. After an odd-man save by Max Lagace, Anthony Richard started a counterattack for the Crunch and Goncalves scored on a rebound to make it 1-0.

Fabian Zetterlund scored twice over the next seven minutes to give the Comets a 2-1 lead and it remained that way until Brian Flynn added an empty-net goal late in the third.

The Crunch sit fifth in the North Division with a 29-23-6-2 record. Despite dropping a 3-1 decision to the Comets last night, the Crunch own the best record in the division over the past 10 games, posting a 7-2-0-1 record in that time.

Alex Barré-Boulet failed to register a point last night, but he has added six points (3g, 3a) in his last four games. Barré-Boulet also leads the Crunch in scoring against the Amerks this season, posting 13 points (4g, 9a) in nine games.

This continues what has been a tremendous rookie season for the Canadian. Goncalves has registered 15 goals and poured in nine assists, with 11 of his 15 tallies coming in 2022. His 15 goals are good for fourth on the team, and second among rookies, trailing only Cole Koepke (18).

After a bit of a slow start to March, the Americans have picked up points in five straight games (3-0-1-1) heading into tonight. Rochester has been bolstered of late by star rookie forward Jack Quinn (21g, 23a) who was missed a majority of January and February while on recall and injured. Since his return to Rochester on March 1, Quinn has posted nine points (3g, 6a) in five games.

The offensive firepower doesn’t stop there, as fellow rookie JJ Peterka ranks third in the AHL in points among rookies with 51 (16g, 35a). The star duo has helped the Amerks score the most goals in the North Division this season (201), but they have also given up the most goals (219).

After dealing with a rash of injuries in the crease throughout the season, the Crunch have found consistency with Max Lagace. The Longueuil, Quebec native has won seven of his last nine appearances (7-1-1), posting a 1.88 goals against average and a .922 save percentage during that stretch.

Lagace now has 13 wins on the season and is starting to get closer to some of his season-high numbers. The eight-year AHL veteran’s career-high for wins in a season is 22 with the Providence Bruins in 2019-20. The veteran now has 99 career AHL wins.

Tonight marks the last home game for the Crunch in March. Over seven games at Upstate Medical University Arena this month, Syracuse owns a 4-2-0-1 record. They have won their last four home games after going winless in the first three to start the month. The Crunch have scored 26 goals in those seven games, averaging 3.71 goals per game in that time.

After an uncharacteristically slow start on home ice this season, in which the Crunch went 3-6-0-1, the Crunch are 13-4-1-1 at home since January.

Nine of the Crunch’s final 16 games—including six of the final seven—will be in Syracuse.

The Crunch switched to their current logo and color scheme when they affiliated with the Tampa Bay Lightning for the 2012-13 season.

The team also wore them in Wednesday’s win over Cleveland. A select number of jerseys will be available in a live postgame auction.

THE RACE HEATING UP

The North Division playoff race is as tight as it can be, with five teams pushing for the last four playoff positions down the stretch.

Between second place Laval and sixth place Belleville, the teams are separated by 0.029. If the playoffs started today, the Crunch and Amerks would meet in the first round. The top five teams in the division qualify for the playoffs in the North Division.