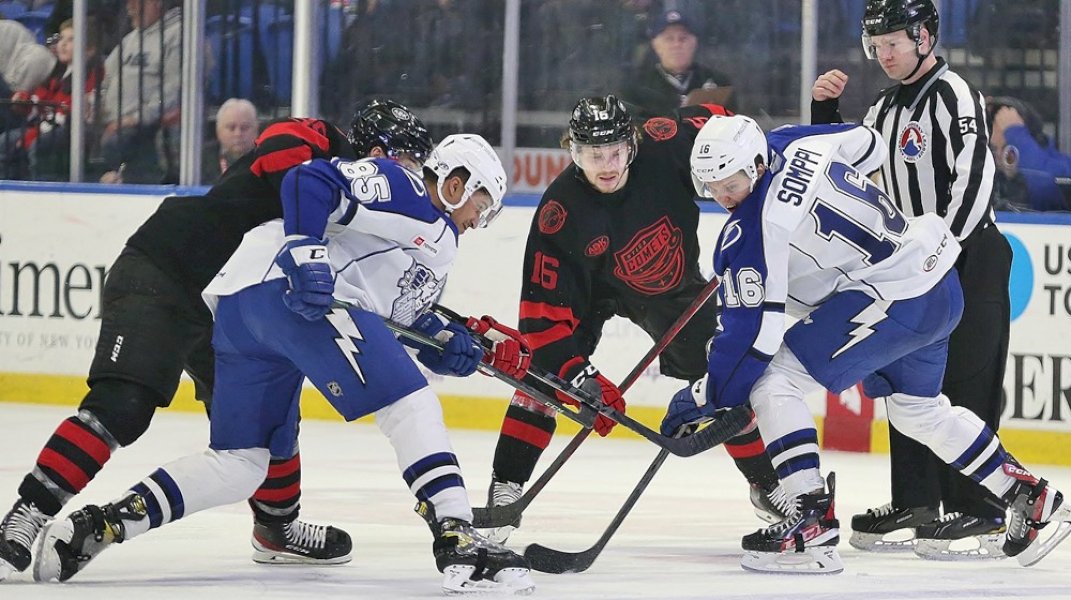 The Crunch hit the road for the final time this month as they make a quick stop in Utica to battle the Comets. It is the 12th match up of the regular season series, with the teams scheduled to square off again on two of the next three Friday nights.

The Crunch (29-22-6-2) continued their playoff push with a 4-0 victory over the Cleveland Monsters Wednesday night, improving their record to 7-1-0-1 in the last nine games.

The Comets are winless in their last three games (0-2-0-1), their longest stretch this season without a win. They suffered a 4-1 loss at home against the Bridgeport Islanders Wednesday night.

Tonight is the 12th of 14 head-to-head matches. The Crunch won the most recent game, 3-2, in overtime March 9, but Utica leads the series with eight wins in 11 games.

Max Lagace turned aside all 21 shots he faced to lead the Crunch to a 4-0 win over the Cleveland Monsters Wednesday night.

PC Labrie broke a scoreless tie late in the first period by scoring directly off a pass from Sean Day at 18:45 of the opening frame. They built on that lead in the latter half of the second period with goals from Cole Koepke and Alex Barré-Boulet.

Gage Goncalves closed out the scoring with a tally 17 seconds into the third period as the Crunch rolled to the 4-0 win. They outshot the Monsters, 41-21 and Max Lagace earned his second shutout in his last three starts.

With back-to-back wins and a 7-1-0-1 record in the last nine games, the Crunch are in fifth place in the North Division with a 29-22-6-2 record. They have an equal points percentage to Rochester (0.559), but the Amerks currently hold the tiebreaker with more regulation wins (22 vs. 21).

During this nine-game stretch, Alex Barré-Boulet leads the team in scoring with 11 points (6g, 5a). He has three straight multi-point performances (3g, 3a) to give him a team-leading 14 this season. The fourth-year pro is up to second on the Crunch in scoring this season with 42 points (12g, 30a) in 42 games. Only two players in the league have more points (12) over that time.

Otto Somppi is the other Crunch skater with at least a point per game over the stretch. The Finnish forward has 10 points (2g, 8a) in eight games played with three multi-point performances in that span.

Syracuse is 21-17-3-2 this season when out shooting its opponent and 7-5-3-0 when being out shot. They won their only game when finishing tied in shots (March 9 at Utica).

The Comets are winless in their last three games and just 2-3-1-1 since an overtime loss against the Crunch March 9. They have scored only 15 goals in those seven games (2.14 goals per game) after they put up a combined 13 goals in two wins prior to this slump.

Fabian Zetterlund leads the team in scoring with 45 points (21g, 24a) in 52 games. He is one of four Comets with at least 40 points this season and three of those four players—Zetterlund, Alexander Holtz and Chase De Leo—have at least 10 points in the head-to-head series against the Crunch. Holtz leads the series with 13 points (7g, 6a) against the Crunch, helping the rookie reach 42 points (21g, 21a) in 40 games.

Akira Schmid has seen action in nine of Utica’s last 10 games. Although he has lost three of his last four decisions, the rookie is still 18-6-3 with a 2.38 goals-against average and a .918 save percentage. He is 4-0-1 this season against the Crunch.

The Longueuil, Quebec native now has 99 career AHL wins. He is 99-54-20 in his AHL career and he is now at 10 career AHL shutouts. This is the second time in his career with more than one shutout in an AHL season; he had a career-high five with Providence in 2019-20.

Riley Nash made his Crunch debut Wednesday against Cleveland. The veteran—playing in his first regular season AHL game in exactly nine years—skated on a line with PC Labrie and Daniel Walcott. He picked up one assist in the game.

The 32-year-old has skated for three different NHL teams this season. He started with Winnipeg before he was claimed off waivers by Tampa Bay. A few weeks later, Arizona claimed him off waivers from the Lightning and he played 24 games with the Coyotes. In total he has played 49 games between those three teams, adding four assists. The Lightning re-acquired him from the Coyotes on Monday in a trade after he cleared waivers.