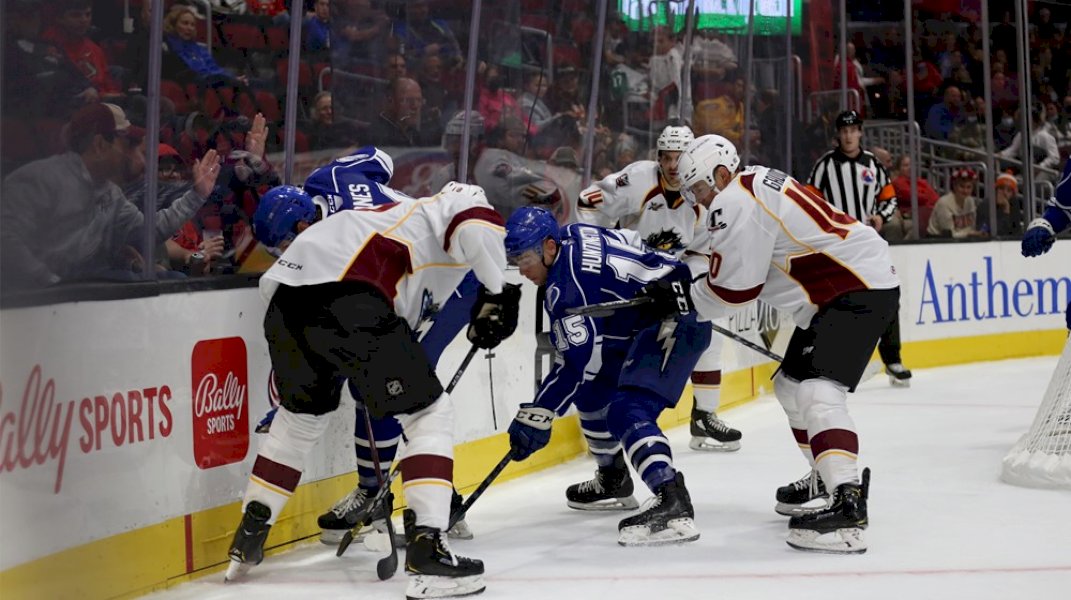 CRUNCH HOME FOR PINK IN THE RINK

The Crunch play the first leg of a back-to-back with a Friday night contest versus the Cleveland Monsters at Upstate Medical University Arena.

The Crunch defeated the Monsters in the season opener, but Cleveland has been red hot since. The Monsters (3-1-0-1) have claimed seven of a possible eight points in their last four games, three of which were on the road.

The Crunch rallied from a 2-0 deficit to defeat the Hershey Bears, 3-2, in overtime Wednesday at Giant Center.

Axel Jonsson-Fjallaby scored on the game’s first shot and Matt Moulson tipped in a shot in front of the crease against Crunch goaltender Amir Miftakhov to give the Bears a 2-0 lead in the first period.

Jimmy Huntington sparked the Crunch rally with a second-period power-play goal at 4:35 to cut the deficit to one. The Crunch tied the game with another power-play goal, courtesy of Gabriel Dumont near the crease, to make it 2-2 at 1:07 of the third.

Charles Hudon scored the overtime game-winning goal at 4:46 to give Miftakhov a win in his AHL debut.

The Crunch own a 2-2-1-0 record through five games this season. The Crunch sit fourth in the North Division.

The Crunch won their last game, 3-2, in overtime against the Hershey Bears Wednesday night. Jimmy Huntington scored on Wednesday night, extending his team-leading goal total to five. Charles Hudon scored the game-winner, marking his second goal of the year and fourth point in five games.

The Crunch were backed up by a stellar performance by goaltender Amir Miftakhov. In his AHL debut, the 21-year-old allowed just two goals on 31 shots.

The Cleveland Monsters are currently second in the North division with a 3-1-0-1 record to start the season. They ride a four-game point streak (3-0-0-1) following their season-opening loss to the Crunch.

Left winger Tyler Angle leads the team in points (6) despite not scoring a goal. The goal-scoring lead (2) is a four-way tie between defenseman Jake Christiansen, right winger Carson Meyer, and centers Tyler Sikura and Justin Scott. Meyer scored both of his goals, including a late game-tying goal, Oct. 16 against the Crunch.

Goaltending has been a major help to the Monsters strong start this year. As a team, Cleveland has a .927 save percentage and a 2.38 goals against average.

J-F Berube has started three of their five games. He has allowed six goals in three games, good for a 1.95 goals-against average. Berube has 34 games of NHL experience, most recently with the Chicago Blackhawks in the 2017-18 season.

Crunch winger Charles Hudon recorded his 200th career AHL point Wednesday versus the Bears. Hudon snatched an assist on Gabriel Dumont’s game-tying goal early in the third period to reach the milestone. The winger’s 201st career point came in overtime when he scored to lift Syracuse to victory.

Hudon has scored points with four different AHL teams in his career: the Hamilton Bulldogs, the St. John’s IceCaps, the Laval Rocket, and the Crunch.

The Alma, Quebec native has also appeared in 125 NHL games in his career, all with the Montreal Canadiens. In the 2017-18 NHL season, Hudon played 72 games and scored 10 goals and 20 assists. The winger spent last season with Lausanne HC in Switzerland.

Remi Elie is expected to play his first game for the Crunch tonight. Elie was officially assigned to the Crunch yesterday; he has been rehabbing an injury suffered in training camp with the Lightning.

For the past three years, the 26-year-old played for the Rochester Americans in the AHL. Last season, Elie led the Americans in goals (10) and finished second in points (19).

The winger was drafted in the second round of the 2013 NHL Entry Draft by the Dallas Stars. Elie played parts of three seasons in the NHL for both the Stars and the Buffalo Sabres.

The Lightning signed Elie to a one year, two-way contract in late July.

Jimmy Huntington scored the Crunch’s opening goal on Wednesday at Hershey, his first time on the scoresheet since being named the AHL’s Player of the Week two weeks ago. The center merited the recognition from his natural hat trick that brought Syracuse back from a three goal deficit in an eventual 5-4 overtime loss at Cleveland Oct. 16.

The Laval, Quebec native now has five points-all goals-through five games played. He is the first Crunch player since Nikita Kucherov in 2013-14 with five goals through the team’s first five games. With that, Huntington has already matched his 2019-20 goals total (5) and surpassed his power-play tallies from last season (2) with three of his five goals coming on the man advantage.

Defenseman Sean Day collected a pair of primary assists in Wednesday’s win for his second multi-point game of the season. In his second season with the Crunch, the 23-year-old has racked up four points (1g, 3a) in five games from the blue line.

Day is currently in a multi-player tie for sixth in the AHL for points by defensemen and he sits just one point back of joining Monsters defenseman Jake Christiansen in a four-man tie for second in the league.

Day’s only goal on the season came shorthanded against the Monsters in the first game of the season. Day and Springfield Thunderbirds defenseman Steven Santini are the only two defensemen in the AHL with a shorthanded goal this season.

The Crunch scored two goals on the power play Wednesday against the Bears. It was the first time this season they scored multiple power-play goals in the same game; they last did that in the 2020-21 regular season finale May 15 vs. Rochester.