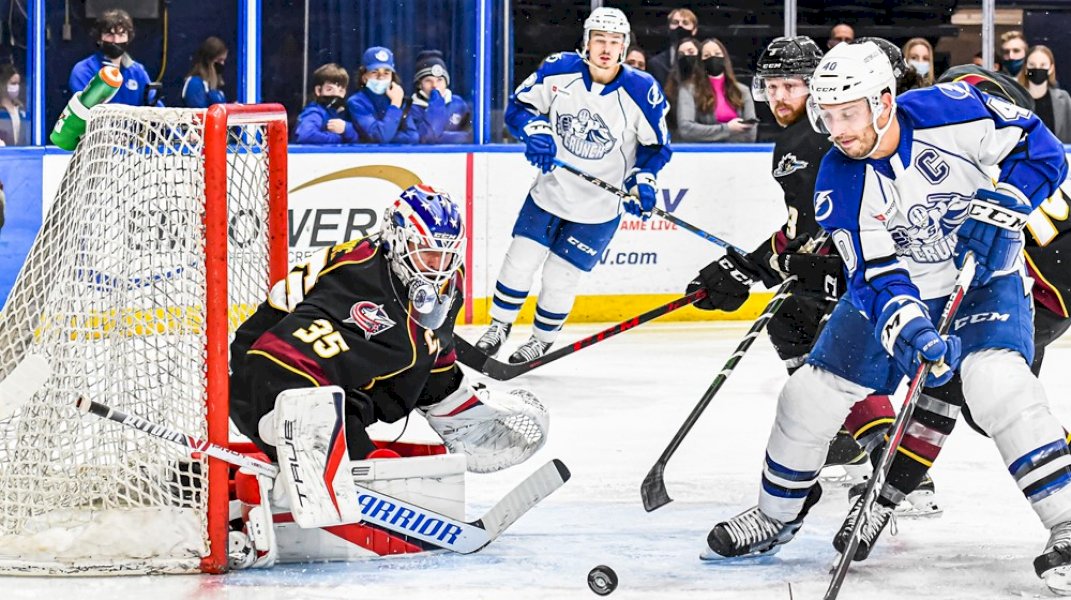 The Crunch wrap up their eight-game regular season series against the Cleveland Monsters tonight at Upstate Medical University Arena.

The Crunch (28-22-6-2) earned another three wins in four games last week and they have collected points in seven of their last eight contests (6-1-0-1).

Cleveland has won four of the first seven matches against the Crunch; Syracuse has won two of three at home, including a 3-1 win Jan. 26 in their last meeting.

The Crunch overcame a pair of one-goal deficits and defeated the Belleville Senators, 5-4, in overtime Sunday night.

Gabe Fortier gave the Crunch a 1-0 lead with his 12th goal of the season early in the first period, but the Senators rattled off three consecutive goals to grab a 3-1 lead by the midway point of regulation. Alex Barré-Boulet pulled the Crunch within one on a rebound goal at 13:53 of the second period.

Simon Ryfors tied the game four minutes into the third period, but the Senators came back to take the lead again one minute later. Cole Koepke evened the score with 3:34 to play in regulation before Barré-Boulet delivered the overtime game-winning goal at 4:09 of the extra session to move the Crunch back into a playoff position.

After mulling around outside the playoff picture for a good chunk of February, the Crunch ripped off a 10-game stretch at 6-3-0-1 to vault into the fifth and final playoff spot in the North Division.

Head coach Ben Groulx has found some consistency between the pipes during that stretch, as all six wins have come with goaltender Max Lagace in the net. In his last seven games, Lagace is 6-0-1 with a 2.14 goals-against average and a .913 save percentage. The veteran goaltender is now up to 98 career AHL victories with a 12-7-1 record this season.

The Crunch switched to their current logo and color scheme when they affiliated with the Tampa Bay Lightning for the 2012-13 season.

The team will wear the jerseys again on Saturday, with 10 expected to be available in a live postgame auction.

The Monsters enter Wednesday night’s game last in the North Division with 56 points, and the division’s only record below 0.500. The Monsters have rebounded from a mid-season nine-game losing streak (0-8-1-0) with a 9-4-3-1 record in the last 17 games.

Defenseman Jake Christiansen leads the team in points, and 11 (3g, 8a) of his 37 points this season have come in the last nine contests. Rookie Tyler Angle ranks second on the club and is the only other Cleveland player to reach 30 points this season; he has 30 (8g, 22a) in 57 games this season.

Rookie netminder Jet Greaves leads Cleveland goaltenders with 10 wins. He is 10-7-2 with a 2.67 goals-against average and a .910 save percentage in 22 games this season.

Simon Ryfors broke out offensively in Week 23, powering the Crunch with a trio of multi-point performances over the four-game week. He tied for the team lead in scoring with seven points (2g, 5a) in four games. He notched three assists in the third period Wednesday against Hartford and then recorded back-to-back one goal, one assist performances Saturday-Sunday.

His linemates Otto Somppi and Gabe Fortier also had multi-point games Sunday against Belleville. Somppi has 11 points (2g, 9a) in his last eight games. Fortier has two multi-point games in the last four outings.

The Tampa Bay Lightning re-added forward Riley Nash to the organization. Nash was acquired in a trade on Monday afternoon with the Arizona Coyotes in exchange for future considerations. Nash has not played an AHL game this season; the Alberta native has played for three NHL teams this season: Winnipeg, Arizona, and Tampa Bay, racking up four assists in 49 games.

The Lightning also added to the organization’s goaltending depth, adding Alexei Melnichuk in a trade with San Jose. He has been assigned to Orlando and Crunch forward Antoine Morand was sent to the Sharks organization.

The Crunch are firing on all cylinders in the offensive zone, and the leader of that charge is forward Alex Barré-Boulet. Over the last eight games, Barré-Boulet has notched nine points (5g, 4a) and been credited with 46 shots. He recorded his second multi-goal game of the season Sunday, which he capped with his fifth career overtime game-winning goal.

Tonight’s showdown against the Monsters has been a friendly one for Barré-Boulet this season, as he’s scored four points (4a) in two appearances versus Cleveland.