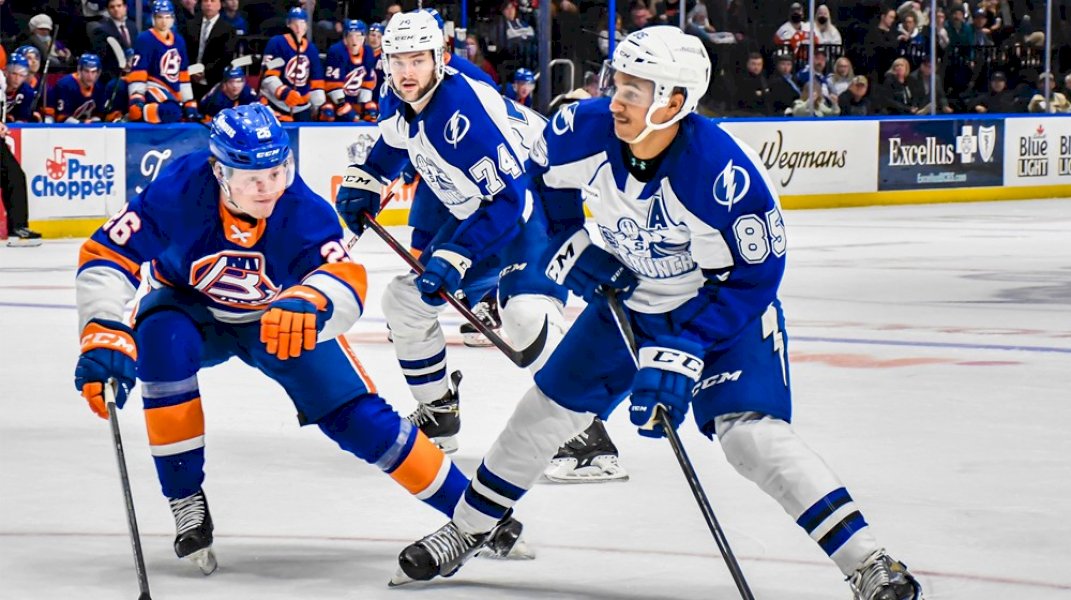 The Crunch continue their second consecutive three-in-three weekend tonight as they make their only trip to Bridgeport to face the Islanders.

The Islanders (23-25-6-4) have used a three-game point streak (2-0-1-0) to edge closer to the playoff line in the Atlantic Division. They have not played since an overtime loss at Springfield on Wednesday.

Max Lagace made 25 saves and Gage Goncalves provided the only offense as the Crunch bested the Wilkes-Barre/Scranton Penguins, 1-0, last night at Mohegan Sun Arena at Casey Plaza.

The goaltending duel between Max Lagace and Louis Domingue saw the teams enter the third period deadlocked 0-0. Gage Goncalves broke the scoreless tie 12:10 into the third period. He received a pass from Gabriel Dumont, skated to the bottom of the left circle and sent a puck toward the crease. It bounced in off a Penguin to give the Crunch a 1-0 lead.

Lagace made that goal stand by making eight saves in the third period and 25 in the game for his first shutout with the Crunch.

They have also found success on the road and they’ve pushed their road winning streak to four games. They’ve earned points in their last five road contests (4-0-1-0) since Feb. 27. The Crunch have improved to 13-11-5-0 away from Syracuse this season.

Gage Goncalves scored the lone goal in their 1-0 win last night. It was the rookie’s second goal in the last three games and it was his second game-winning goal this season. Goncalves has now scored five first goals this season, which ranks second on the Crunch to Gabriel Dumont (6) and is tied for second among all AHL rookies.

Like the Penguins last night, the Islanders are also a low scoring team; they rank 26th in the AHL by averaging 2.78 goals per game. They did put up a season-high seven in a 7-4 win over Providence to kick off this three-game point streak. Veteran Chris Terry leads the way with a team-high 45 points and 21 goals. He has 17 points on the power play.

Corey Schneider has started the last two games for the Islanders. After earning his first shutout of the season last weekend, he took an overtime loss in Springfield on Wednesday and is now 8-10-3 with a 2.85 goals-against average and a .916 save percentage.

Tonight is the final game of three straight games against Atlantic Division teams.

Veteran goaltender Max Lagace continues to receive the lion’s share of action in the Crunch crease while Hugo Alnefelt is out due to injury. Lagace has played in six straight games—including five straight starts—since March 9. He has won all five of his starts and is 5-0-1 over the six games, posting a 1.83 goals-against average and a .924 save percentage in that span.

The Crunch earned their second shutout win of the season last night. Max Lagace delivered 25 saves for the team’s first 1-0 win this season.

It was the Crunch’s 23rd shutout since the start of the 2017-18 season and their seventh that has finished 1-0. Three of their last five shutout wins have ended in 1-0 scored and the most recent Crunch goaltender record a 1-0 shutout win prior to last night was Scott Wedgewood when he made 33 saves against Binghamton Feb. 12, 2020.

It was the Crunch’s 126th all-time regular season shutout and 28 have ended in 1-0 Crunch wins. That was the fourth time they’ve done it against the Penguins (Last: Cedrick Desjardins, March 20, 2013).

This season Daniel Walcott joined former captain Luke Witkowski as the only players to skate for the Crunch in seven different seasons. Last night, Walcott moved past Ben Thomas with his 291st game, setting a new mark for games played for the Crunch during the Lightning affiliation. Walcott ranks fourth all time in franchise history.