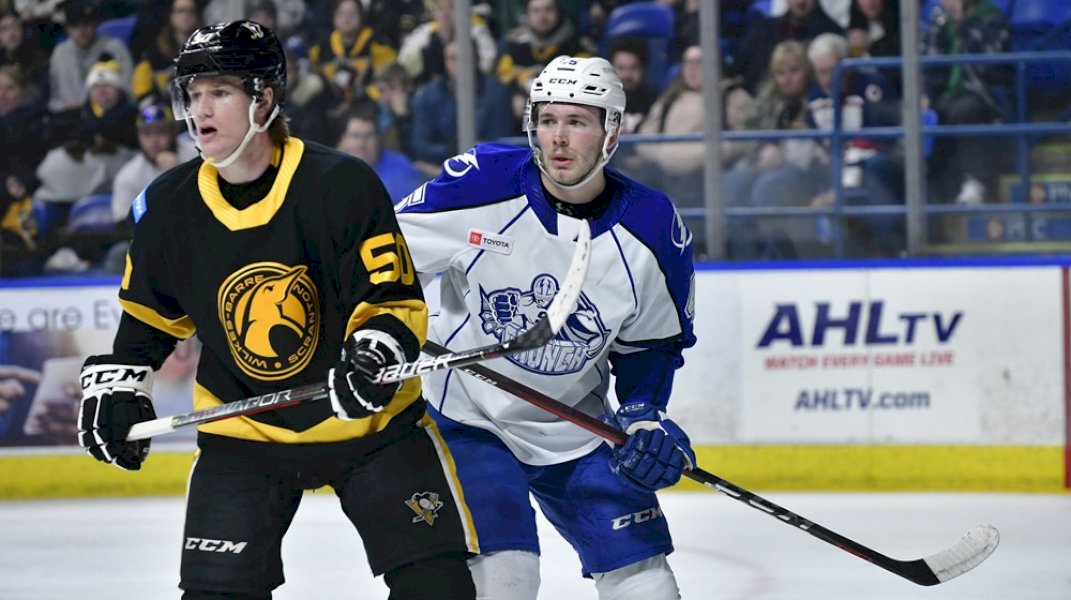 The Crunch play the opening leg of their second straight three-in-three weekend tonight as they visit the Wilkes-Barre/Scranton Penguins at Mohegan Sun Arena at Casey Plaza.

Syracuse never trailed, and Alex Barré-Boulet opened the scoring in the final 30 seconds of the first period. He bumped a puck to himself off the back of the net and then fooled goaltender Adam Huska with a wraparound to make it 1-0 Crunch. Justin Richards scored the lone goal in the second period to tie the game and set the stage for the Crunch’s big third period.

Otto Somppi scored the go-ahead goal 2:03 into the third period. Rushing up ice on a partial 2-on-1, Somppi made a toe-drag with the puck to create a shooting lane and picked the top corner to make it 2-1. A few minutes later, his line went back to work in the offensive zone and Sime Ryfors handed a puck off to Darren Raddysh, who tucked in a shot off the crossbar for a 3-1 lead. Gabe Fortier added to the lead later in the period before Hartford grabbed one back with two minutes to play.

Max Lagace made 29 saves to become the first Crunch goalie with 10 wins this season.

The Crunch are on a season-high five game point streak (4-0-0-1), earning nine of 10 possible points over the last week. That has pushed the Crunch into a playoff position with a 26-21-6-2 record and a 0.545 points percentage.

Defenseman Darren Raddysh continued with the hot hand Wednesday, logging a multi-point performance against his former club. Raddysh assisted on the game’s opening goal then netted the eventual game-winning goal in the third period. The 26-year-old has scored the game-winning goal in back-to-back games and three times in the Crunch’s last five outings.

Raddysh is now tied with Gabriel Dumont and Charles Hudon for the team lead with four game-winning goals; he paces all AHL defensemen in that department. He has now tied the single season franchise record for game-winning goals by a defenseman, joining Derrick Walser (2001-02) and Radim Bicanek (2000-01).

The Penguins are on a four-game point streak (2-0-2-0), the longest active streak among Atlantic Division teams, and they’ve won back-to-back games. That has aided their quest for a playoff spot and they currently rank sixth in the Atlantic with a 0.518 points percentage (25-23-4-4).

Former Crunch goalie Louis Domingue is in his first season with the Penguins. He has split time between the NHL and AHL and he is 5-4-2 with a 2.57 goals-against average and a .923 save percentage for Wilkes-Barre/Scranton.

Tonight is the middle game of three straight games against Atlantic Division teams; they finish the stretch tomorrow in Bridgeport.

Over the final 21 games of the regular season, Syracuse has 10 games remaining against the Atlantic Division and 11 game versus the North Division. The Crunch are 7-3-1-1 in their first 12 games against Atlantic Division opponents. Including tonight, three of their remaining 21 games are against the Penguins; the Penguins won the first in overtime Feb. 27 and they will meet twice in Syracuse in April.

Veteran goaltender Max Lagace continues to receive the lion’s share of action in the Crunch crease while Hugo Alnefelt is out due to injury. Lagace has played in five straight games—including four straight starts—since March 9. He has won all four of his starts and is 4-0-1 over the five games, posting a 2.24 goals-against average and a .906 save percentage in that span.

The 29-year-old leads the Crunch this season with 10 wins. He is 10-7-1 with a 3.06 goals-against average and a .876 save percentage this season. He spent last season with the Penguins, going 1-0-0 in Pittsburgh and 4-3-2 with Wilkes-Barre/Scranton. He carries 96 career AHL wins into tonight’s game.

The line of Otto Somppi, Gabe Fortier and Simon Ryfors keyed the Crunch’s win Wednesday against the Wolf Pack. The line produced all three goals and the three combined for eight points (2g, 6a)—all in the third period.

Ryfors busted out of his six-game scoring slump with an AHL career-best three assist performance. With a helper on all three third period goals, Ryfors notched his third multi-point game and he now has 19 points (4g, 15a) in 51 games.

Fortier had gone five games without a point before cashing in with a goal and assist. The second-year pro is one of six Crunch players with at least 10 goals and his 25 points (11g, 14a) rank sixth on the team.