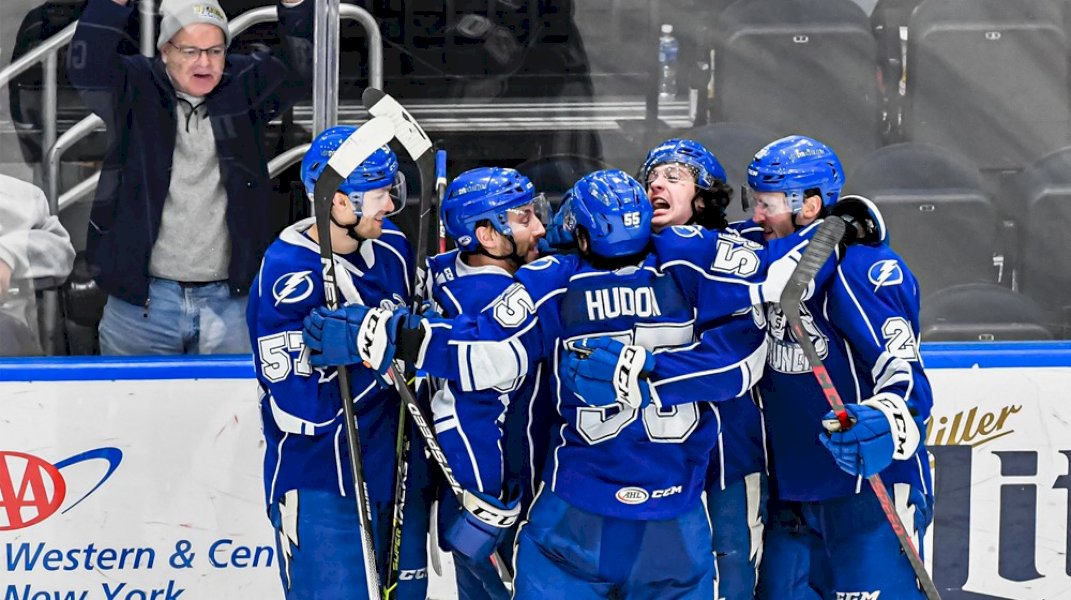 CRUNCH HOST HARTFORD FOR ONLY TIME

The Crunch take on the Hartford Wolf Pack tonight in their only trip to Upstate Medical University Arena.

The Crunch (25-21-6-2) capped off a four-in-five week with seven of eight possible points following an overtime win against Rochester Sunday. They went 4-2-0-1 in seven straight games against North Division teams.

The Wolf Pack (27-18-5-2) have lost back-to-back games to begin their five-game road trip that continues north of the border this weekend.

The Crunch rallied from a 2-0 third period deficit to clip the Rochester Americans, 4-3, in overtime Sunday.

The Amerks opened a two-goal lead in the first period with a power-play goal from Oskari Laaksonen and another tally from Linus Weissbach.

Neither team scored in the second period, but the Crunch’s comeback began immediately in the third frame. Ryan Jones scored 15 seconds into the period to cut the deficit to one. Gage Goncalves tied the game scoring on a breakaway at 7:24 and then Cole Koepke ripped in a power-play goal to give the Crunch their first lead at 10:28. The Amerks answer back immediately to tie the game at three, sending the game to overtime.

Darren Raddysh provided the game-winning goal for the second time in five days to send the Crunch off with a 4-3 win.

The Crunch earned seven of eight possible points last week to improve to 25-21-6-2 with a 0.537 points percentage. The Crunch sit at sixth place in the North Division; they are the lone North Division team in action today and they can catapult into fifth place with a win tonight.

Sunday was the Crunch’s ninth win this season when conceding the first goal. They are now 9-13-2-2 in 26 games this season when going behind 1-0. It was the second time in a three week span they rallied from a 2-0 third period deficit to at least force overtime.

Defenseman Alex Green’s point streak reached five games with his assist Sunday. He collected at least one point in all four games last week and he has chipped in with six points (2g, 4a) during the streak. The Cornell product has 19 points (4g, 15a) in 51 games this season.

Hartford enters play in the midst of a five-game road trip. After dropping the opening two games, the Wolf Pack are in third place in the Atlantic Division with a 27-18-5-2 record. They are 9-11-3-1 on the road this season versus 18-7-2-1 at home.

BRING ON THE ATLANTIC

Tonight begins a stretch of three straight games against Atlantic Division teams; they will visit Wilkes-Barre/Scranton Friday and Bridgeport Saturday.

FORMERLY WITH THE PACK

The Crunch have three players on their roster who have played for the Wolf Pack during their career. Defensemen Sean Day and Darren Raddysh were both on the other side of this matchup the last time the teams met in November 2019.

P.C. Labrie spent the beginning of this season with the Wolf Pack on a professional tryout contract. He logged eight points in 21 games before his PTO expired and he signed with the Crunch.

The Crunch are 7-8 in games decided in overtime; they are 6-6 when it finishes in the five-minute overtime period and 1-2 when it ends in a shootout.

Darren Raddysh bookended the week with a pair of overtime game-winning goals for the Crunch. He provided the heroics with 0.6 seconds remaining in overtime Wednesday in Utica by cashing in on an end-to-end rush to give the Crunch a 3-2 win. He then iced the game away 59 seconds into overtime as the Crunch rallied past the Rochester Americans on Sunday.

The two overtime tallies give Raddysh seven in his AHL career. He is also tied with Charles Hudon for the team lead with two overtime winners; Cole Koepke and Jimmy Huntington have scored the other two this season. In Raddysh’s 269-game AHL career, he has scored 27 goals and 10 have been game-winners. He has scored five goals in the last 14 games after going the first 27 games without scoring.

He is one of three AHL defensemen with two overtime goals this season along with Tommy Cross (Springfield) and Vladislav Kolyachonok (Tucson). Since the 2004-05 season, Raddysh has the second-most overtime goals among defensemen, behind T.J. Brennan (8).