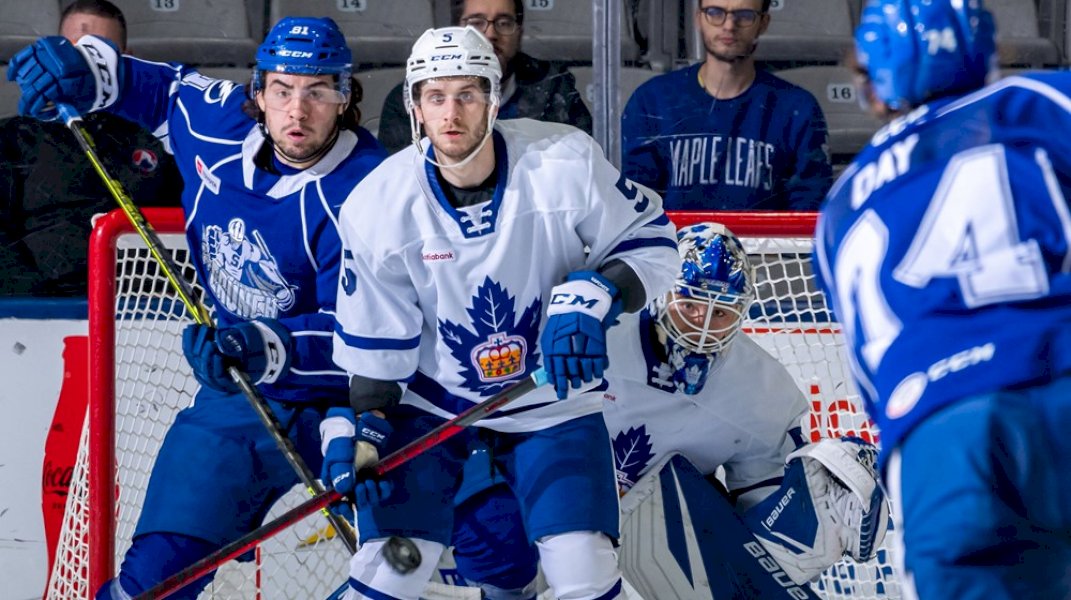 The Crunch return home to begin a three-game homestand as they host the Toronto Marlies for the first time this season.

The Crunch (24-21-6-1) collected their second win in two games this week with a 3-2 triumph over the Rochester Americans last night.

The Marlies (25-20-3-1) have lost three straight games and six of their last seven after seeing Utica rally past them in the third period last night.

Tonight is just the second of four matches between the North Division foes; Syracuse earned a 4-2 win in Toronto Dec. 15.

Rochester opened the scoring when Nick Pastujov jammed home a loose puck during a net-mouth scramble 2:29 into the first period. The Crunch took control the rest of the period and tied the game less than five minutes later on a point shot from Alex Green. Later in the period, Alex Barré-Boulet fired home a power-play goal to put the Crunch up, 2-1.

Charles Hudon doubled the Crunch lead early in the second period by finishing off a rebound near the crease for his 21st goal of the season. The Amerks got within one on a deflection goal by Brett Murray six minutes later. Neither team scored in the third as the Crunch picked up the 3-2 win while carrying a 43-16 shots advantage.

Syracuse enters tonight’s contest at sixth in the North Division with a 24-21-6-1 record and a 0.529 points percentage. A victory for the Crunch and an Americans loss would leapfrog Syracuse over Rochester into fifth place in the division.

Alex Barré-Boulet is on a scoring spree since snapping his 19-game goal drought five games ago. The forward has eight points (5g, 3a) in his last five games, and he has goals in back-to-back games for the first time this season.

The Marlies sit fourth in the North Division with a 25-20-3-1 record coming into play tonight. After posting an 8-4-0-0 record to start the new year, the Marlies have cooled off lately, going 3-7-0-0 in their past ten games, with only one win in the last seven games.

Brett Seney and Joseph Duszak have led the team offensively this year. Seney has 40 points (14g, 26a) in 41 games to lead the Marlies, while Duszak has been productive from the blue line, adding 39 points (6g, 33a) in 39 games. Curtis Douglas has also been hot lately, scoring four goals in his past six games.

In net, the Marlies will be without starter Erik Källgren tonight. The Swedish goalie is currently on emergency recall to the Toronto Maple Leafs. Joseph Woll started last night in Rochester, allowing three goals on 29 shots. Through 14 games this season, the goaltender owns a 5-7-0 record with a 3.50 goals against average and a .902 save percentage.

Day has recorded two points in four of his past five games, and he has nine points—all assists—in total. The Belgian blueliner now owns the longest assist streak for the Crunch this season; with a point tonight, he will tie Cole Koepke for the longest point streak of the season by a Crunch player (six games), a mark Koepke set Dec. 10-Jan. 8.

After a multi-point performance against the Amerks yesterday, Green has four points (2g, 2a) in his past three games.

The duo has combined for nine points (2g, 7a) and a +5 rating in the last three games.

Since the calendar flipped to March, the Crunch have gone 3-2-0-0 in five games against the Comets and Amerks. The Crunch’s record in their past five games is the second-best start to a month all season, just behind the team’s 3-1-1-0 stretch to start January.

The current run has come at an opportune time for Syracuse, as the two teams ahead of them in the North Division—Rochester and Toronto—are currently mired in three-game losing streaks.

BORIS KATCHOUK ADDED TO THE CRUNCH

The Tampa Bay Lightning assigned Boris Katchouk to the Crunch on a conditioning assignment earlier this week. The 23-year-old is in his fourth pro season and has appeared in 37 games for the Bolts as an NHL rookie. He has chipped in six points (2g, 4a) this season after he made his NHL debut on Oct. 16. That night, he became the 68th player to play for the Lightning after skating for the Crunch during this affiliation.

The Waterloo, Ontario native has played three previous seasons in Syracuse, starting with his rookie campaign in 2018-19. His point production swelled each season, starting with a 23-point campaign as a rookie and culminating with 34 points (11g, 23a) in just 29 games last season. His 34 points last season earned him recognition on the end-of-season North Division All-Star Team. He logged an assist in his first Crunch game of the season last night.

Tonight is just the second of four regular season matches between the Crunch and Marlies. It is the first since the Crunch’s 4-2 win in Toronto.

The Marlies haven’t played at Upstate Medical University Arena since Jan. 3, 2020 when the Crunch routed Toronto, 8-2.

COMETS PREP FOR FINAL GAME OF SAVE OF THE DAY WEEK