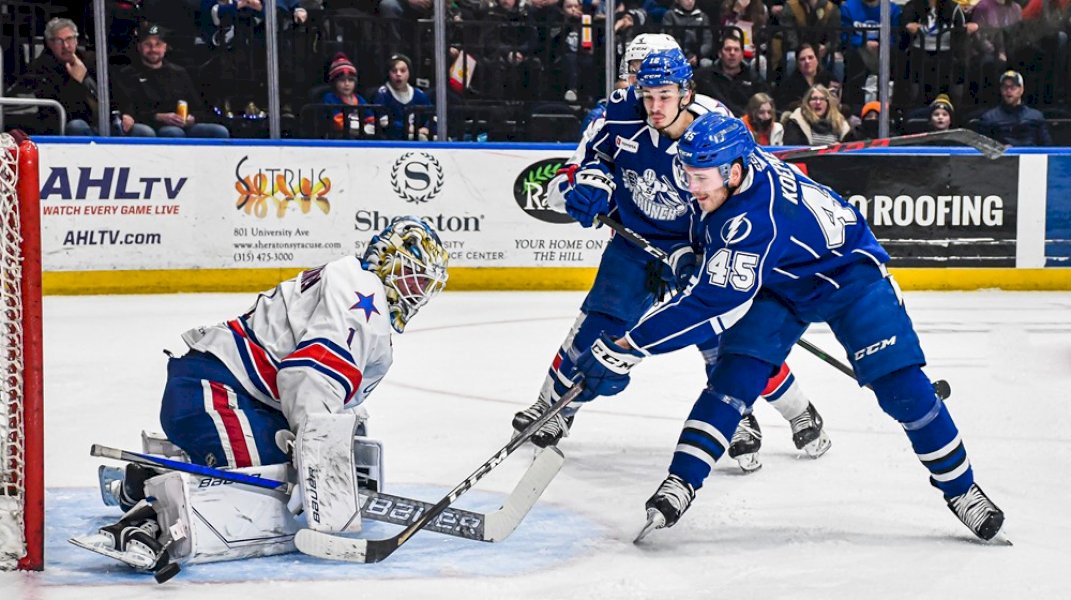 The Crunch make their final trip to Rochester this season to face the Amerks at Blue Cross Arena. It is the opening game of a three-in-three weekend for both clubs, who rematch in Syracuse Sunday.

The Crunch (23-21-6-1) grabbed an overtime win in Utica Wednesday night to salvage the final game of a three-game series against the Comets.

The Americans (27-22-3-2) have lost two straight games and have slumped with just three wins in the last 10 games.

Tonight is the 10th of 12 matchups between the clubs this season. They play again in Syracuse in two days and then they wrap up the series in two weeks. The Crunch are 5-3-1-0 against the Amerks this season and they are 5-1-1-0 in seven games since January.

The Crunch rallied from a pair of one goal deficits before Darren Raddysh scored with 0.6 seconds remaining in overtime to give the Crunch a 3-2 win over the Utica Comets at the Adirondack Bank Center Wednesday night.

The Comets grabbed a 1-0 lead 3:09 into the first period on a tip in by Ryan Schmelzer. Syracuse tied the game in the second period and a deflection goal by Alex Barré-Boulet off a long point shot by Sean Day. The Comets responded to take the lead again just under four minutes later, but Remi Elie got the Crunch all square late in the second period on a tic-tac-toe pass play that he deposited on a redirection.

Both offenses stalled in the third period, but the Crunch penalty kill came up large with a successful 5-on-3 kill. They also turned aside a Utica power play in overtime and then Raddysh won the game with an end-to-end rush to give the Crunch a 3-2 victory.

The Crunch snapped a mini two-game losing streak with their win over the Comets. The Crunch have earned points in seven of the last 10 games (5-3-2-0) and they are 23-21-6-1 overall this season.

Despite being held without a point in consecutive games, captain Gabriel Dumont still leads the Crunch in scoring with 46 points (24g, 22a) in 51 games. It’s only the fifth time all season he has gone at least two games in a row without a point; the season-high for the consistent scorer is three games Jan. 29-Feb. 4.

There’s a four-way tie for second on the team in scoring at 32 points. The group includes Sean Day, Charles Hudon, Cole Koepke and Alex Barré-Boulet, who posted a hat trick in a four-point game last week against the Amerks. His 10 points (3g, 7a) against the Amerks lead the series for both teams.

Rookie JJ Peterka tops the Amerks in scoring with 46 points (13g, 33a) in 48 games. The German is second in the AHL among rookie scorers to Tucson’s Matias Maccelli. He is a point per game player against the Crunch, contributing seven points (1g, 6a) in seven games.

Ukko-Pekka Luukkonen has started the last two games against the Crunch, going 1-1-0 in those starts. Overall he is 9-10-1 with a 3.36 goals-against average and a .894 save percentage.

Defenseman Sean Day has assists in four straight games after his helper Wednesday in Utica. He logged three consecutive multi-point games last week to finish tied with Barré-Boulet for the most points by a Crunch player during the week. He recorded two assists in all three games and he now has seven multi-point games this season.

Now in his second season with the Crunch, Day is tied for second on the team with 32 points (6g, 26a). He ranks sixth among defensemen in the AHL in scoring and his 26 assists are fifth among blueliners. His goals, assists and points totals are all new career highs.

The Crunch’s win Wednesday was their fifth overtime victory of the season. It snapped a three-game losing streak in games decided past regulation and improved their record to 5-6 in games decided in overtime; they are 1-1 if a game gets to a shootout.

Darren Raddysh is the fourth different Crunch player to score an overtime goal this season, joining Charles Hudon (2), Cole Koepke and Jimmy Huntington. It was Raddysh’s sixth career overtime game-winning goal. His last one was Oct. 27, 2019 when he netted the winner in a 2-1 Hartford win against Bridgeport. He had three for Rockford during the 2018-19 season and had one for a rookie with the IceHogs in 2017-18.

BORIS KATCHOUK ADDED TO THE CRUNCH

The Tampa Bay Lightning assigned Boris Katchouk to the Crunch on a conditioning assignment. The 23-year-old is in his fourth pro season and has appeared in 37 games for the Bolts as an NHL rookie. He has chipped in six points (2g, 4a) this season after he made his NHL debut on Oct. 16. That night, he became the 68th player to play for the Lightning after skating for the Crunch during this affiliation.

The Waterloo, Ontario native has played three seasons in Syracuse, starting with his rookie campaign in 2018-19. His point production swelled each season, starting with a 23-point campaign as a rookie and culminating with 34 points (11g, 23a) in just 29 games last season. His 34 points last season earned him recognition on the end-of-season North Division All-Star Team.