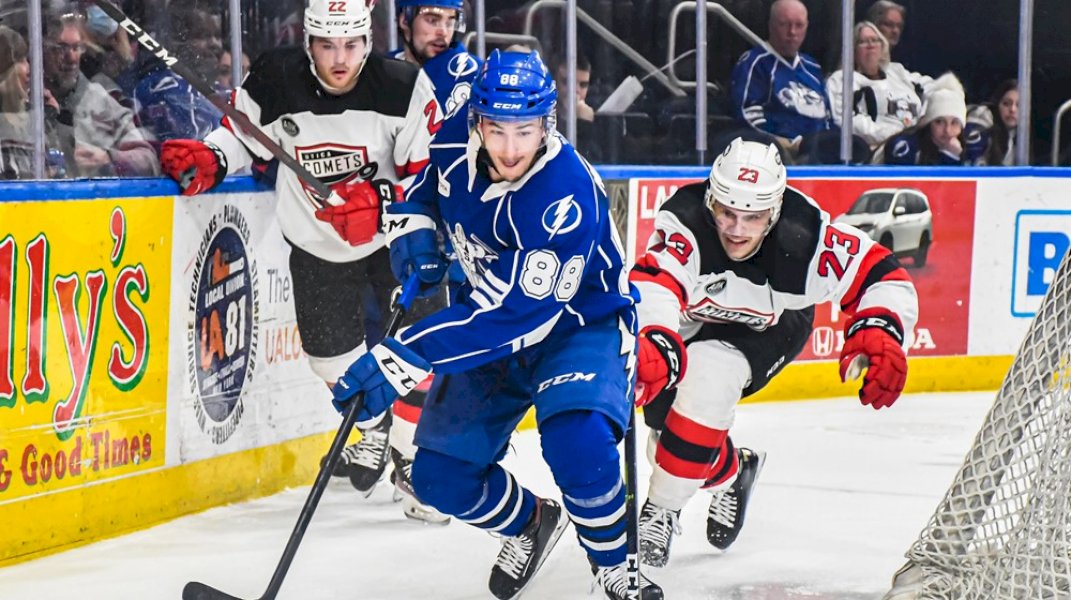 The Crunch and Comets play the middle game of a three-game series tonight at Upstate Medical University Arena. They will square off again Wednesday in Utica.

The Crunch (22-20-6-1) had their four-game points streak snapped with last night’s 8-5 loss against the Comets.

The Comets (32-11-5-0) earned their second straight win overall and collected their seventh win in nine tries against the Crunch this season.

Tonight is the 10th of 14 regular season meetings between the teams; it’s the final time they meet in Syracuse with the last four slated for Utica.

The Comets scored a season-high eight goals and fended off several comeback attempts by the Crunch to win, 8-5, at Upstate Medical University Arena last night.

The teams combined for four goals in a 3:25 span in the first period. Frederik Gauthier started the scoring and Gage Goncalves responded for the Crunch, but the Comets scored twice more in just over a minute to grab a 3-1 lead and chase starter Hugo Alnefelt.

Twice in the second period, the Crunch clawed within one, but each time the Comets answered and they ended up with another three-goal period to carry a 6-3 lead into the third period. The teams alternated goals again in the third, with Utica’s two goals coming into empty nets to give them the 8-5 win.

The Crunch saw their four-game points streak (2-0-2-0) and five-game home points streak (4-0-1-0) come to an end last night. It was the team’s first regulation home loss since Jan. 29, when they lost 6-1 to Charlotte. Despite that, the Crunch have collected points in seven of their past nine contests (5-2-2-0), but they remain in sixth place in the North Division with a 22-20-6-1 record.

Antoine Morand has added a third period goal in each of the last two games for the Crunch; this is Morand’s first two-game goal streak of the season, and second of his AHL career. The center last scored goals in consecutive games during the 2020-21 season for Syracuse; his previous streak stretched from April 19-21 and it came against the same opponents (Rochester and Utica).

Defenseman Sean Day dished out two assists in last night’s loss to the Comets, vaulting him to ninth in the league for points by a defenseman (29) this season. Over his past nine games, Day has added eight points (1g, 7a) and he has back-to-back multi-point games for the first time this season. His six games with at least two points is tied for third most on the team.

The Comets are first in both the North Division and the Eastern Conference at 32-11-5-0 with a 0.719 points percentage. Utica has won back-to-back games following a two-game losing streak; the Comets have alternated two-game winning and losing streaks over their last eight games.

Brian Flynn took home the first star of the game last night, adding a goal and two assists in the Comets victory. Last night was the first three-point night of the season for the Massachusetts native and his second multi-point game.

Akira Schmid allowed five goals last night in Syracuse, marking the third time all season the Comets goaltender has allowed at least five goals. All three of those games have come in Schmid’s past 10 starts.

Charles Hudon returned from a four-game absence due to injury last night and promptly scored two goals for the Crunch. He became the second player on the team to reach 20 goals this season, joining Gabriel Dumont. Hudon and Dumont are one of five pairs of teammates with at least 20 goals this season; the other four teams with two 20-goal scorers are Abbotsford, Ontario, Chicago and Milwaukee.

Hudon has 32 points (20g, 12a) in his first season with the Crunch. The veteran winger has now reached 20 goals in his last four AHL seasons; he has hit that mark in four of his five full AHL campaigns.

GONCALVES ON THE BOARD AGAIN

Gage Goncalves got the Crunch on the board last night with a first goal, assisted by line mates Gabriel Dumont and Anthony Richard. Goncalves’ first period marker was his third in four games and added to a torrid stretch in which the rookie has picked up nine points (4g, 5a) in his past eight games.

The Mission, BC native now sits four back of Cole Koepke (14) for the most goals by a Crunch rookie this season.

WHAT’S IN A SHOT

Despite the loss, the Crunch out shot the Comets, 42-27, and they have now out shot Utica in all nine matches in the regular season. Utica is 7-1-1-0 in those nine games against the Crunch.

Utica has been out shot more frequently than it has out shot opponents. The Comets are 10-8-2-0 this season when out shooting their foes, but they are 20-3-3-0 when having fewer shots than their opponent.

A STRONG WEEK FOR BB

Alex Barré-Boulet is making a case to be named AHL Player of the Week. After recording his second career hat trick and a four-point game Wednesday in Rochester, Barré-Boulet followed up with another multi-point outing last night. He currently leads the AHL in scoring this week with six points (3g, 3a) in two games.

The fourth-year pro is tied for third on the Crunch with 31 points (6g, 25a) in 32 games. He became the leading Crunch goal scorer during the Lightning affiliation with his hat trick on Wednesday, giving him 75 career Crunch goals.