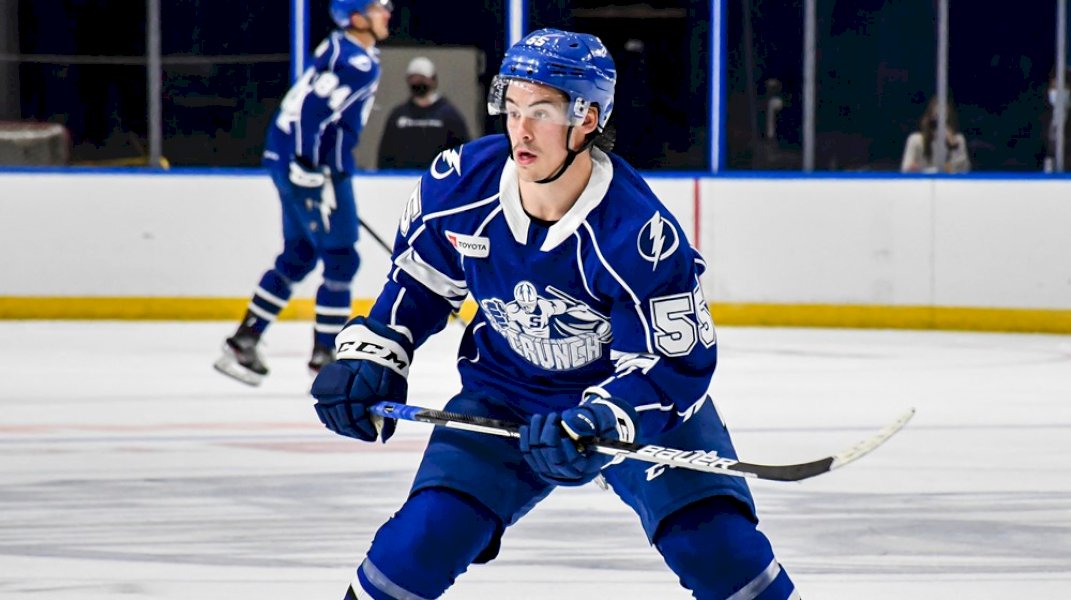 CRUNCH TAKE ON BEARS IN HERSHEY

The Crunch open their first three-game week with a Wednesday match against the Hershey Bears at Giant Center.

After claiming a season-opening win, the Crunch have dropped three straight games (0-2-1-0) and are 1-2-1-0 to start the season.

The Bears have faced Charlotte in three of its first four games this season; they are 2-1-0-0 against the Checkers and are 3-1-0-0 on the season.

The Crunch fell to the Utica Comets, 2-1, in their home opener at Upstate Medical University Arena Saturday night.

For the second night in a row, the Crunch scored an early first period goal to take a 1-0 lead. Rookie Gage Goncalves deflected home an Alex Green shot from the right point 2:51 into the game.

The Crunch offense was stymied the rest of the way, with Comets goaltender Akira Schmid making 32 saves. Utica’s offense came in the second period. Alexander Holtz fired home a shot from the left circle off the rush at 10:11 and Nate Schnarr capitalized on a turnover in the final minute of the middle period to give the Comets a 2-1 lead.

Hugo Alnefelt stopped 28 shots in the loss for the Crunch.

The Crunch went winless in two games last week and now sit at 1-2-1-0 this season.

The Crunch have two players with at least four points in four games. Jimmy Huntington leads the team with four goals and is tied for the lead with four points. He was held scoreless in two games last weekend after being named AHL Player of the Week following his four-goal outburst in two games at Cleveland in Week 1.

Antoine Morand has points in three of four games for the Crunch to start the year. He is tied with Huntington for the team lead with four points (1g, 3a) including one of the team’s two shorthanded goals.

Veteran Charles Hudon paces the Crunch with 14 shots on goal in three games played. He scored a goal in the season opener against the Monsters and he has two points in three games. His next point will be the 200th of his AHL career; he enters with 199 points (103g, 96a) in 256 AHL games.

Between the pipes, Hugo Alnefelt has seen action in all four Crunch games thus far, including three consecutive starts. He is 1-2-1 with a 3.39 goals-against average and a .870 save percentage. Fellow AHL rookie Amir Miftakhov has backed him up the last three games, but is expected to make his North American pro debut tonight; he spent time last season in the KHL where he had a 4-2-0 record.

Four Bears are producing at a point per game through two weeks. Garrett Pilon, now in his fourth season with the Bears, leads the way with six points (3g, 3a). He is among a group of six players in the league tied for third in overall scoring. Veteran Mike Sgarbossa has five points (2g, 3a) in four games. He is one game shy of 500 pro games entering tonight; he has 120 points (50g, 70a) in 132 games for the Bears. Axel Jonsson-Fjallby and Mike Vecchione both have four points apiece in four games.

In net, Zach Fucale has allowed just two goals in two wins, stopping 50-of-52 total shots (.962 save percentage). The former Crunch goaltender is now 11-2-0 with a 2.77 goals-against average and a .936 save percentage in 13 appearances with the Bears since last year. Pheonix Copley is 1-1-0 in his two starts.

IT HAS BEEN A WHILE

It’s been nearly two full years since the Crunch and Bears last met. The teams only played one of their two scheduled meetings during the canceled 2019-20 season; Hershey defeated the Crunch, 4-2, Nov. 3, 2019.

Only three players who appeared in that game for the Crunch are currently on the Syracuse roster. Hershey has nine players on their roster who played in that game, including Pheonix Copley, who earned the win in goal.

Among current AHL teams, the Crunch have faced the Bears more than any other opponent except Rochester and Wilkes-Barre/Scranton. They are 51-57-11-4-2 (W-L-T-OTL-SOL) in 154 all-time matches against Hershey.

The Crunch are eager to return some of their injured players to their lineup.

Cole Keopke, who missed last weekend for the Crunch after producing two points in two games in Cleveland, traveled with the team to Hershey and practiced yesterday. The rookie forward is expected to return to the lineup tonight. The Minnesota-Duluth product has five points (3g, 2a) in 11 AHL games, including nine games played last season.

Remi Elie, who was injured in the preseason, also traveled with the Crunch to Hershey as he nears a return to action. He is not expected to return tonight.

The Crunch power play has scored in three of their first four games, but they went 0-for-4 in Saturday’s loss to the Comets. They rank 15th in the AHL on the man advantage with an 18.8% (3-for-16) conversion rate.

Hershey’s power play slots ahead of the Crunch at 23.5% (4-for-17). The Bears have scored a pair of power-play goals in two games and were held scoreless in the other two games.

Syracuse’s penalty kill has been a bright spot over the first two weeks. The Crunch are fourth in the AHL at 92.9%, killing off 13-of-14 opposition power plays. They’ve scored more shorthanded goals (2) than power-play goals allowed (1); they are the only team in the league in that position.

The Bears have been equally strong on the penalty kill. They are tied with Texas for second in the league with a 94.9% penalty kill, successfully defending 17-of-18 chances. They allowed one power-play goal in the season opener, but have gone 15-for-15 in the last three games.

Crunch Rally Past Bears, 3-2, In Overtime