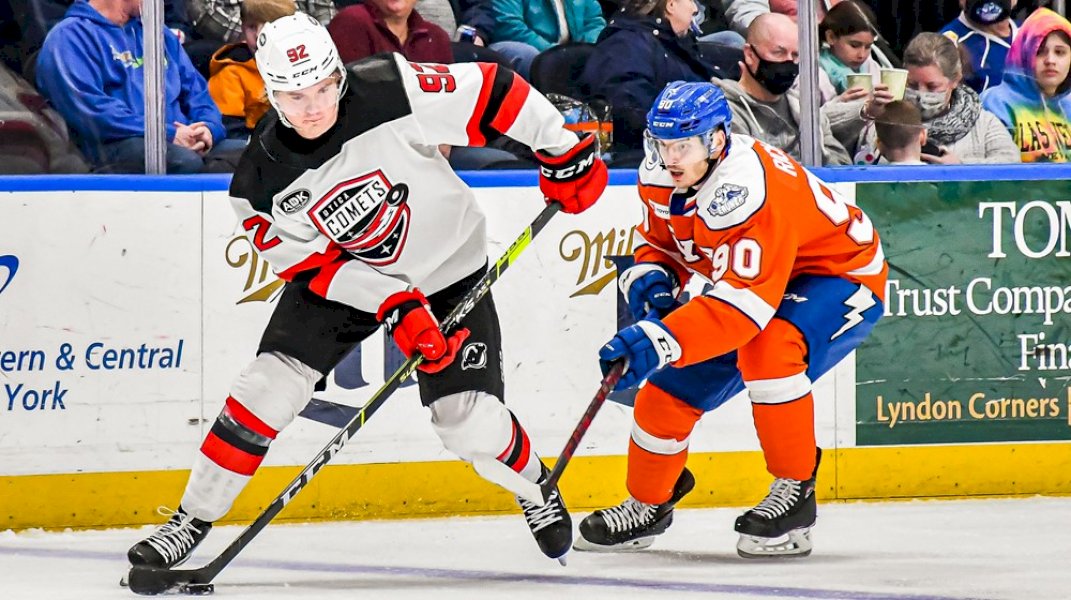 The Crunch and Comets begin a three-game series tonight at Upstate Medical University Arena. The teams rematch tomorrow in Syracuse and then close out the set Wednesday in Utica.

Barré-Boulet opened the scoring for a three-goal first period; he came off the right wall and wristed home his fourth goal of the season at 5:04. Three and a half minutes later, he took a shot from the right circle and Gabriel Dumont deflected it in for a power-play goal. Later in the period, Barré-Boulet set up Cole Koepke on a 2-on-1 for a 3-0 lead.

The Amerks clawed one back with a shorthanded goal late in the first period and it remained 3-1 until the third period. Darren Raddysh added to the Crunch lead with a one-timer just as a Crunch power play ended. The Amerks scored back-to-back goals to get within 4-3 before Antoine Morand added an insurance goal and Barré-Boulet netted an empty-net tally to make it 6-3.

The Crunch sit at sixth in the North Division with a 22-19-6-1 record and a 0.531 points percentage. Syracuse keeps inching further past 0.500 with consistent results. The Crunch have collected points in seven of their past eight contests (5-1-2-0), including in each of the last four games (2-0-2-0) to match a season high.

A facilitator of that play is forward Anthony Richard. The newly minted Richard has been a menace since being acquired from the Nashville Predators organization last month. The former Milwaukee Admiral has recorded 10 points (2g, 8a) in 13 matchups for the Crunch. Richard’s electrifying speed has been a boost to a first line with Gabriel Dumont and Gage Goncalves. Richard is on a three-game points streak.

Goncalves also has a hot hand of late. He notched a career high in points (4) and assists (3) last Saturday against the Comets. That display has bolstered him through a strong run of form, tallying eight points (3g, 5a) in his past seven games.

The Comets are first in both the North Division and the Eastern Conference at 31-11-5-0 with a 0.713 points percentage. They have slumped recently with four regulation losses in their last seven games.

Joe Gambardella has found his offensive touch. The center broke a three-game point-less streak, recording three points (1g, 2a) in his last two games. His two assists came in Syracuse last weekend. The veteran forward has posted three points in his last three contests against Syracuse.

AJ Greer has been a superb offensive weapon for the Comets. He netted a goal last weekend against the Crunch, giving him three in four Galaxy Cup matches. Greer sits at 33 points (15g, 18a) in 38 games; he is one of five Comets with at least 30 points this season.

Crunch forward Alex Barré-Boulet snapped a career-long 19-game goal drought with a pair of tallies Wednesday against Rochester. The goals broke his tie with Cory Conacher for the most scored by a Crunch player during the Lightning affiliation. He currently ranks seventh all-time in franchise history with 74 goals; he has 165 points (74g, 91a) in 175 games for the Crunch since beginning his career in 2018-19.

After an uncharacteristically slow start on home ice this season, the Crunch have righted the ship at Upstate Medical University Arena. Syracuse posted a 3-6-0-1 record on home ice in its first 10 home games; the team has gone on a 9-2-1-0 run in 12 home games since Jan. 7.

Crunch rookie goaltender Hugo Alnefelt continues to stake his claim to the number one job. After earning the win in Rochester on Wednesday, the 20-year-old is 7-1-3 in his last 11 decisions Jan. 8. He is 3-0-2 with a 2.56 goals-against average and a .907 save percentage in five starts since returning from a month-long absence due to injury.

The Swede leads Crunch goaltenders in wins (9) and he holds a 9-4-4 record with a 2.87 goals-against average this season. Three of his four regulation losses have come against the Comets.

Syracuse and Utica meet three straight times starting tonight through Wednesday. Today and tomorrow are the final two meetings in Syracuse and the remaining four games of the 14-game series are slated for Utica.

Fabian Zetterlund leads all scorers in the series with 10 points (4g, 6a) in eight games. Gabriel Dumont has nine points (3g, 6a) to lead the Crunch.

COMETS PREP FOR BACK-TO-BACK AT SYRACUSE