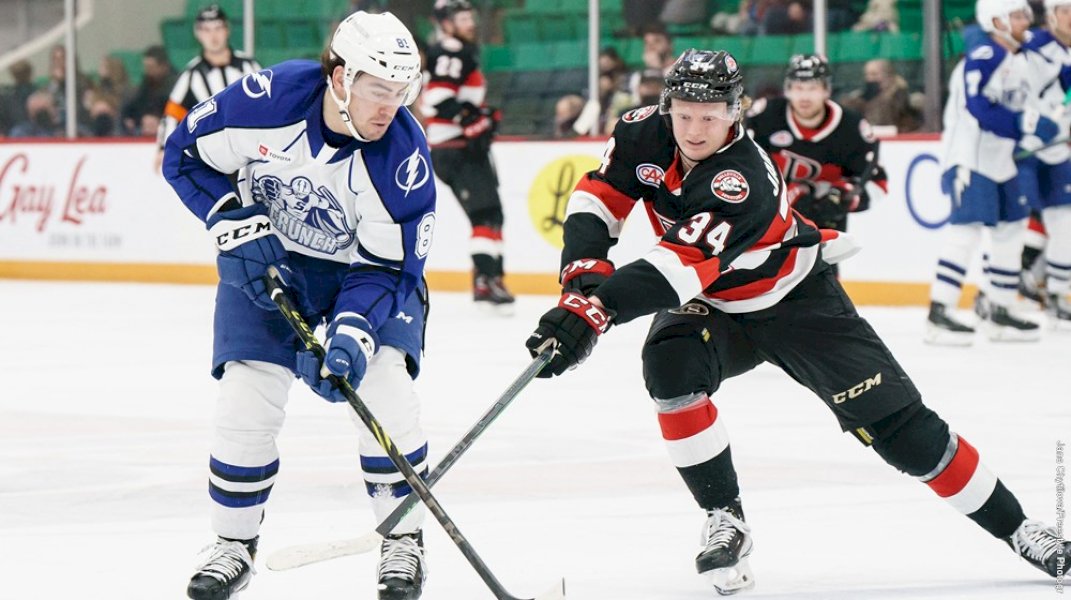 CRUNCH SEARCH FOR SWEEP VERSUS SENS

The Crunch shoot for a second straight win over the Belleville Senators as the teams conclude a two-game set at CAA Arena.

The Crunch (20-18-4-1) rolled to their third consecutive win overall with a 6-2 win over the Senators yesterday.

The Senators (21-20-0-0) had their two-game winning streak snapped and the result allowed the Crunch to leapfrog Belleville into fifth place in the North Division.

Tonight is the Crunch’s final trip to CAA Arena this season. They are 2-1-0-0 in Belleville against the Senators this season and 3-2-0-0 overall in the season series.

Syracuse blitzed Belleville early, peppering the first eight shots on goal, but the game was tied 1-1 after the first period. Darren Raddysh scored for the Crunch and the Sens logged a power-play goal with one second remaining in the frame.

The Crunch pulled away in the second period. Cole Koepke and Gabriel Dumont both scored twice in the period with Zac Leslie scoring the lone Senators goal as the Crunch opened a 5-2 lead.

Dumont potted the hat trick goal 2:56 into the third period on a rush with Remi Elie. Hugo Alnefelt ended with 28 saves for his sixth win in his last eight decisions.

The Crunch earned their fifth win in the last eight games (5-2-1-0) to improve to 20-18-4-1. Now on their fourth win streak of at least three games this season, the Crunch moved past Belleville into fifth place in the North Division.

In addition to Gabriel Dumont’s hat trick last night, the Crunch got a multi-goal performance from rookie Cole Koepke. It was his first career two-goal game and gives the 23-year-old 13 goals this season, ranking third on the Crunch behind Dumont (23) and Charles Hudon (18). He is tied for eighth among all rookies in the AHL in goals.

Hugo Alnefelt made 28 saves to improve to 6-1-1 in his last eight decisions. The 20-year-old has posted a 2.35 goals-against average and a .906 save percentage in those eight appearances since Jan. 8.

The Senators (21-20-0-0) had their two-game winning streak snapped last night and they are now 6-3-0-0 in their last nine games. Two of those losses have come against the Crunch.

Defenseman Zac Leslie and forward Andrew Agozzino both logged multi-point games (1g, 1a) last night. Leslie now has 16 points (3g, 13a) in 33 games this season with three points (1g, 2a) in two games against the Crunch. Agozzino moved into a tie with Egor Sokolov for the team lead with 14 goals; Agozzino has 23 points in 35 games this season.

Mads Sogaard has appeared in all five matches against Syracuse. He was chased last night after allowing six goals on 29 shots, dropping to 11-11-0 with a 2.94 goals-against average and a .901 save percentage this season. Filip Gustavsson relieved Sogaard and stopped all 11 shots he faced. He has tended goal two straight days, stopping 31-of-33 in a loss to the New York Rangers for Ottawa on Sunday.

Gabriel Dumont notched the second Crunch hat trick this season; Jimmy Huntington scored the other in the Crunch’s second game of the season Oct. 16 at Cleveland (5-4 OTL).

Sixth-year head coach Ben Groulx became the second head coach in franchise history to reach 200 for the Crunch. Groulx has posted a 200-118-25-22 record with the Crunch since taking over as head coach ahead of the 2016-17 season.

Syracuse has scored at least four goals in a game 13 times, holding an 11-0-1-1 record in those games, including nine straight wins.

Gabriel Dumont’s jumped into a tie for fourth overall in the AHL with a career-high 23 goals following his hat trick last night. His previous best was 20 goals in 66 games with Hamilton in 2014-15.

In 43 games this season, Dumont is averaging one goal every 1.87 games played. Prior to this season, the veteran averaged one goals every 4.04 games, scoring 137 goals in 554 games.