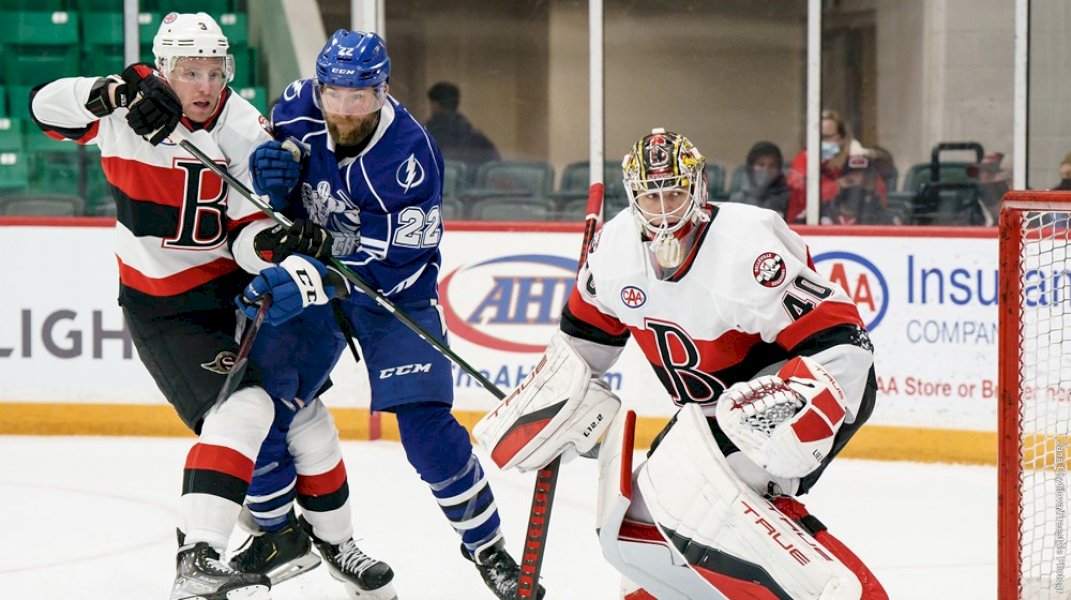 The Crunch hit the road for a quick two-game set against the Belleville Senators at CAA Arena.

The Crunch (19-18-4-1) have won their first two games of this four games in five days stretch after scoring back-to-back wins on home ice.

The Senators (21-19-0-0) have also won two straight games to maintain a slim lead over the Crunch in the North Division standings.

The Crunch matched a season high with six goals in a 6-3 win over the Rochester Americans Saturday at Upstate Medical University Arena.

Syracuse never trailed and potted two goals in all three periods. Gage Goncalves opened the scoring in the first period and Remi Elie followed up with a slick backhand finish on a 2-on-1 rush to make it 2-0.

Birthday boy Daniel Walcott and Gabe Fortier added two more goals in the second period as the Crunch carried a 4-2 lead into the third period. Charles Hudon and Gabriel Dumont capped the Crunch scoring with their 18th and 20th goals respectively.

Rochester scored three power-play goals, one in each period, but it wasn’t enough as the Crunch earned their fourth win in seven games against the Amerks.

The Crunch had 12 different players log at least one point either Friday or Saturday. Defenseman Darren Raddysh tied with Gabriel Dumont for the most on the team with four points (1g, 3a). Raddysh matched his career-high with three points Friday and then notched an assist Saturday to highlight a successful return from his stint in Tampa Bay. It was the first time all season the fifth-year pro recorded points in back-to-back games.

Rookie Gage Goncalves, placed on the top line before Friday’s game, responded with his first career multi-point game (1g, 1a) Saturday against Rochester. The 21-year-old has 10 points (7g, 3a) in 36 games this season.

The Senators (21-19-0-0) have won back-to-back games and are 6-2-0-0 in their last eight games since starting a two-game set with the Crunch Feb. 2. One of those losses came in the second game of that series to begin the month. They enter following a home-and-home sweep of the Toronto Marlies.

Captain Logan Shaw has keyed their recent success, leading the team in scoring with 10 points (4g, 6a) over the eight games. He notched a three-point game (1g, 2a) against the Crunch in their 4-3 win Feb. 2. Egor Sokolov is right behind him with nine points (5g, 4a) in that same stretch and he has game-winning goals in back-to-back games.

Lassi Thomson rides a five-game point streak with eight points (1g, 7a); he chipped in with five assists in their two wins against Toronto over the weekend.

The Crunch featured six different goal scorers across all four lines in their 6-3 win over the Rochester Americans.

The second line of Cole Koepke, Charles Hudon and Alex Barré-Boulet had the quietest night on the stat sheet, with just Hudon’s power-play goal.

BEN GROULX CLOSING IN ON 200

The Crunch have found their scoring touch in the last two games, scoring five and six goals in a pair of wins. They were the fourth and fifth times the Crunch scored at least five goals in a game and it was the first time they’ve done it in consecutive games this season.

Their 11 goals in two games is the most in a two-game span this season. Syracuse has only scored at least four goals in a game 12 times, holding a 10-0-1-1 record in those games, including eight straight wins.

With 11 goals on 72 shots—a 15.3% shooting percentage—the Crunch raised their team shooting percentage from 8.9% to 9.3%. Eight different players have scored a goal with Gabriel Dumont, Charles Hudon and Remi Elie the only three with two tallies.

Gabriel Dumont’s empty-net goal Saturday gives him a career-high tying 20 goals for the Crunch. His only other 20-goal campaign was with the Hamilton Bulldogs in 2014-15. He is one of eight players in the AHL to reach 20 goals so far.

At 42 games played, he is the fastest Crunch skater to reach 20 goals since Alex Barré-Boulet (39 games) and Carter Verhaeghe (41 games) in 2018-19. Those two ended tied for the AHL lead with 34 goals by season’s end.

Women’s hockey shut out in weekend opener at Connecticut College

Men’s hockey rally against Middlebury comes up one goal short