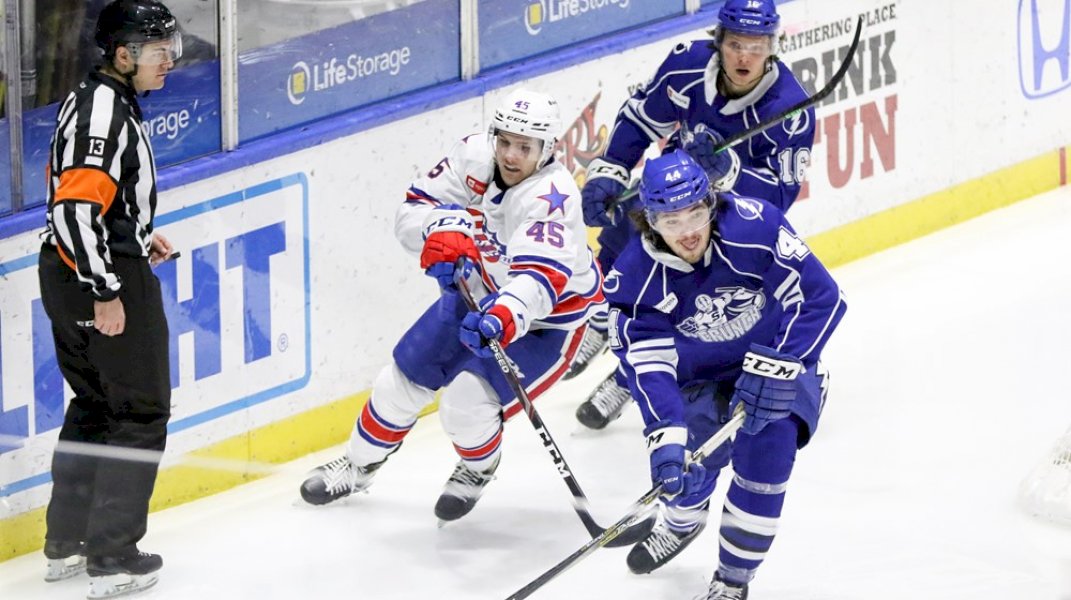 The Crunch conclude their two-game homestand with a matchup against the Rochester Americans at Upstate Medical University Arena.

The Crunch (18-18-4-1) snapped their three-game losing streak with a 5-2 win last night against Laval. It was the Crunch’s second straight win on home ice.

The Amerks are in the midst of a three-in-three weekend and they are finishing a five-game road trip with previous stops in Providence, Hartford, Bridgeport and Utica.

Remi Elie capitalized on an early Laval turnover to give the Crunch a 1-0 lead at 4:20. Gabe Fortier stole the puck and set up Elie for a one-timer in the high slot. Charles Hudon doubled the lead by slipping a puck through Cayden Primeau at 8:05 of the first period and Gabriel Dumont capped the scoring in the frame with a left circle wrist shot at 13:11.

The Rocket pulled within one in the second period with a pair of tallies and carried a 5-on-3 power play into the third. The Crunch successfully killed that opportunity before stretching the lead on a Cole Koepke power-play goal later in the third. Darren Raddysh added an empty-net marker to put a bow on a three-point night and give the Crunch their 5-2 advantage.

The Crunch come into play tonight with an 18-18-4-1 record, placing them sixth in the North Division. The Crunch’s win last night over the Laval Rocket snapped a three-game losing streak.

Remi Elie scored the opening goal last night, just under five minutes into the first. The goal was the 50th of the veteran forward’s career and it also snapped a streak of nine games without a goal. After missing the first five games of the season, Elie now sits fifth on the team in goals (8)—tied with Anthony Richard, who was recently acquired in a trade from Milwaukee.

Hugo Alnefelt made 21 saves to secure his team-leading seventh victory for the Crunch. The start was the first in nearly a month for the rookie goaltender, with his last game coming against the Comets on Jan. 21.

Rochester enters with a lot of offensive firepower and the Amerks rank third in the AHL by scoring 3.47 goals per game. Captain Michael Mersch is tied for seventh in the league, along with Crunch captain Gabriel Dumont, with 19 goals. Mersch’s 39 points (19g, 20a) lead the Amerks. A veteran of 450 AHL games, Mersch recently eclipsed 300 career AHL points and sits at 303 entering today.

Ukko-Pekka Luukkonen is back with the Amerks after missing a month due to a lower-body injury he suffered in a game against the Tampa Bay Lightning in early January. The goaltender is 1-1-1 in his three most recent starts with the Amerks, posting a .920 save percentage.

After returning from a recall to the Lightning, Darren Raddysh added three points in last night’s win for the Crunch. The defenseman’s first period assist was the 100th point of his AHL career. His empty-net goal in the third period was also his first goal of the season.

Raddysh’s three points led the team and tied his career high for points in a game. Last night was the fourth time the 25-year-old scored three points in one game. In 28 games this season, the Caledon, Ontario native has racked up seven points (1g, 6a).

In the Crunch’s past four games, captain Gabriel Dumont has scored three goals. The veteran forward currently leads the team in goals (19), just two up on Charles Hudon (17).

Dumont is also just one goal back of his career high for goals in one season (20), a mark he hit in 2014-15 when he played 66 games for the Hamilton Bulldogs. He has played in all 41 Crunch games this season.

The Crunch and Amerks resume their 12-game regular season series tonight. The teams squared off four times in January with the Crunch capturing three wins; Rochester won the latest (Jan. 28) by scoring the game-winning goal in the final 10 seconds of regulation. Overall, the teams have split the six games and both teams have one win in Syracuse.

Rochester scored a total of nine goals in the first two games of the series, but they have been limited to two or fewer in the last four matches, totaling six goals in four games.

Gabriel Dumont (4g, 1a) and Alex Barré-Boulet (5a) are the top Crunch scorers against the Amerks. Ryan MacInnis paces active Rochester players with four points (3g, 1a); he scored both goals in their 2-1 win against the Crunch Jan. 28.

The Amerks rank second in the league with a 23.9% power play, cashing in on 37 of their 155 opportunities. They are 5-for-20 against the Crunch this season.

The Crunch’s penalty kill has allowed just two goals in the last five games and is tied for 26th in the AHL at 76.9%. The Amerks rank 17th in the league at 80.9%; they were perfect in four previous games before last night.