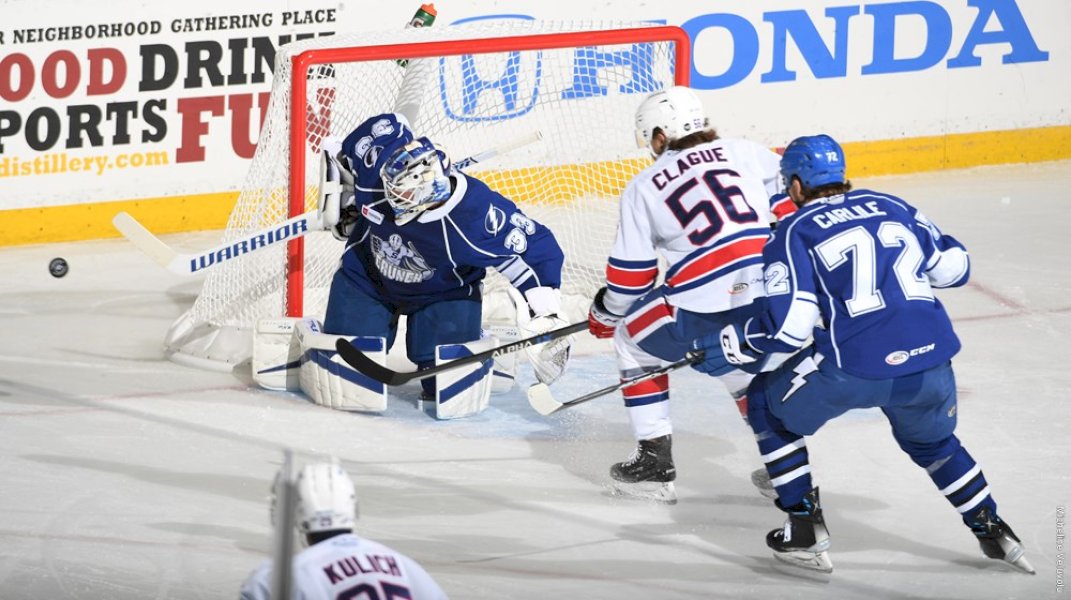 The Crunch aim for their first win of the season as they host the Rochester Americans in their 29th home opener in franchise history.

It’s the second of 12 scheduled matches in the regular season series between the clubs; the Crunch went 8-3-1-0 against the Amerks last season.

Brett Murray scored with 2.9 seconds left in regulation as the Amerks defeated the Crunch, 4-3, last night at Blue Cross Arena.

Tyson Kozak opened the scoring for the Amerks with his first AHL goal at 13:48 of the first period. The Crunch responded with a power-play goal off the stick of Darren Raddysh with just over 10 seconds to play in the frame, leveling the game at one.

Gemel Smith scored the only second period goal to give the Crunch a 2-1 advantage heading to the third. Linus Weissbach then scored twice in three minutes to push Rochester back in front. Gabe Fortier tied the game with 7:23 remaining on a redirect from the slot.

Murray netted the game-winning goal with 2.9 seconds left in the third to give the Amerks the win.

The Crunch enter tonight’s contest winless through three games to start the season. All three have been one-goal games; Syracuse dropped its opening weekend slate in Cleveland in back-to-back shootouts. The Crunch then lost to the Amerks, 4-3, last night. Last season the Crunch were 14-5-7-2 in one-goal games.

A player who can guide Syracuse to home-opening revenge is Simon Ryfors. The forward has been dynamic to start his second AHL season. Last year, it took Ryfors 19 games to register three goals. This season, it only took two games to hit that mark. The Swede is the leading goal scorer for the Crunch with three. Ryfors was held scoreless and registered one shot last night at Rochester.

Felix Robert has also had a strong start this season. Robert has already racked up five points (2g, 3a), all of which he collected on the opening weekend at Cleveland. Robert came to Syracuse after two seasons with Wilkes-Barre/Scranton. He totaled 47 points (22g, 25a) in 90 games played with the Penguins.

The Americans currently sit atop the North Division at 3-1-0-0. Rochester has won its last two contests by a single goal. Last night, Brett Murray iced the game for the Amerks by guiding a puck past Crunch goaltender Max Lagace with three seconds left in regulation. Last season, Rochester won its first two games against the Crunch in the head-to-head series.

Linus Weissbach can help the Americans keep their foot on the gas pedal. The forward leads the team with five points (3g, 2a) in four games played. Weissbach earned first star honors last night against Syracuse, earning three points (2g, 1a). The Swede was a seventh round pick (192nd overall) in the 2017 NHL Draft by the Buffalo Sabres.

Goaltender Ukko-Pekka Luukkonen has started every game for the Amerks. The netminder stopped 17 shots last night against the Crunch, but he allowed three goals. He enters with a 2.49 goals-against average and a .906 save percentage.

Alex Barré-Boulet has continued his torrid scoring pace with the Crunch, chalking up a league-high seven assists—five of which are primary assists—in three games.

With 206 points (85g, 121a) in 205 games, Barré-Boulet ranks fourth in Crunch history in scoring. Last night he passed Cory Conacher’s mark for the most during the Lightning affiliation.

Gabriel Fortier returned to the Crunch last night, tallying a goal in his first game this season. The forward made the Lightning’s NHL roster out of training camp. Fortier skated against Pittsburgh in Tampa Bay’s third contest of the year before being sent down to the Crunch yesterday.

His arrival provides a much needed boost for Syracuse, with captain Gabriel Dumont out due to an injury. Fortier was the seventh leading point getter for the Crunch last season, racking up 35 points (14g, 21a) in 72 games.

Tonight marks the 29th home opener in Crunch history. The Crunch are 13-9-1-1 all-time in home openers, posting four ties along the way. That includes their first game in franchise history, a 7-7 tie against Albany on September 30, 1994.

Since affiliating with the Tampa Bay Lightning ahead of the 2012-13 season, the Crunch own a 5-4-1-0 record in home openers at Upstate Medical University Arena.

Rochester has served as the Crunch’s opponent four times; the Crunch are 3-0-1-0 in those games.

Lucas Edmonds made his AHL debut last night for the Crunch. The forward was drafted by the Tampa Bay Lightning in the third round (86th overall) of the 2022 NHL Draft.

Edmonds returned to North America last season after gaining professional experience in Sweden for four seasons. The North Bay, Ontario native played for the Kingston Frontenacs in the OHL last season. Edmonds recorded 113 points (34g, 79a) in only 68 games played.

He is the second player on the Crunch to make his AHL debut this season, joining Bennett MacArthur.
Visit Source